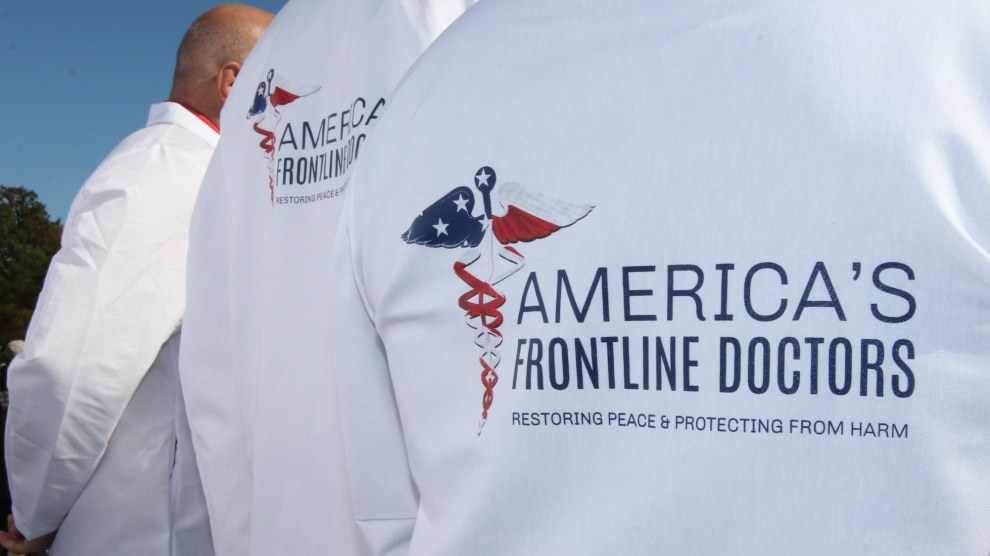 On Friday, America’s Frontline Doctors (AFLDS), a group right-wing physicians that has helped spread misinformation about the COVID pandemic, along with a handful of parents and doctors, asked a federal court in Alabama to block the emergency use authorization (EUA) for the COVID vaccine use in 12-to 15-year-olds. In a petition for a temporary restraining order against the US Department of Health and Human Services, the plaintiffs claim that the COVID vaccine is more dangerous to kids than the disease it’s supposed to prevent, and that because children’s risk of dying from COVID is close to zero, the expansion of the vaccine to adolescents is “medically unnecessary.”

“We doctors are pro-vaccine, but this is not a vaccine,” AFLDS founder Simone Gold said in a statement. “This is an experimental biological agent whose harms are well-documented (although suppressed and censored) and growing rapidly, and we will not support using America’s children as guinea pigs.”

Gold, an emergency medicine doctor, is also a Stanford-educated lawyer who was indicted in February for taking part in the insurrection at the US Capitol on January 6. The indictment doesn’t seem to have put much of a crimp in her activism, however. Over the past few months, she has assembled a “legal eagle dream team” to fight COVID-related restrictions, vaccine passports and “medical discrimination” around vaccines. But she doesn’t seem to have persuaded any of her former Stanford law classmates or similarly pedigreed lawyers into joining this legal crusade.

Instead, the lead attorney on the case against HHS is a Huntsville, Alabama, lawyer named Lowell “Larry” Becraft Jr. who by the mid-1990s had become became the country’s foremost practitioner in the defense of tax protesters—people who’ve been prosecuted for refusing to pay their taxes because they believe federal and state income taxes are unconstitutional. The tax protest movement, according to the Anti-Defamation League, is the oldest far-right anti-government movement still in existence in the United States. Over the past few decades, it’s been closely linked to the “patriot” and “sovereign citizen” movements and some of its leaders have been affiliated with the anti-Semitic and racist Christian Identity theology. Tax protesters have also been linked to political violence targeting the IRS and others involved in enforcing the tax laws.

Tax protesters are the legal world’s biggest losers. The IRS and other tax enforcement agencies almost always prevail in their cases, largely because the protesters are famous for making loony legal arguments to defend their failure to pay required taxes. Becraft’s clients are no exception. He’s even been sanctioned by federal courts for making frivolous filings, such as claiming his clients were innocent because the 16th Amendment had not been properly ratified or simply that the tax laws didn’t apply to US citizens.

Despite her Stanford law degree, Gold is not listed as counsel on the filing against HHS over the vaccine authorization. Instead, the case was filed by a laundry list of COVID-denying lawyers from around the country, including the former pro boxer and current Nevada cannabis lawyer Joey Gilbert. Then there’s Robert Gargasz, an Ohio lawyer who lost a race for Lorain County prosecutor last year after he publicly called for “Marxist anarchists” and “communists” to be shot and “stacked like cordwood.” Gargasz joins Thomas Renz, another Ohio lawyer who was admitted to practice law in 2019 after finally passing the bar on the fifth try since 2011, according to the Ohio Capital Journal. Gargasz and Renz represented an anti-vaccine group, Ohio Stands Up, that sued the state health department earlier this year over its response to the pandemic. Ohio Stands Up dropped the case in March, but not before raking in $130,000 in a GoFundMe appeal to support legal fees for Renz and Gargasz. In February, a federal judge called their suit “incomprehensible” and “a jumble of alleged facts, conclusory and speculative assertions, personal and third-party allegations, opinions, and articles of dubious provenance and admissibility.”

That’s a pretty good description of the petition America’s Frontline Doctors filed in federal court last week, which puts the word “vaccine” in scare quotes because, as the lawyers explain, “Plaintiffs explicitly reject the term ‘vaccine’ as a description of the injections approved under EUA for use in reducing the symptoms of COVID-19.”

The petition, weighing in at 80 pages, is a kitchen sink of conspiracy theories about the COVID-19 vaccine. The Gates Foundation gets name-checked for allegedly colluding with Big Pharma, the UN and the US government to make vaccines “the central focus” of the global pandemic response. The petition also suggests falsely that unvaccinated children are at risk of getting COVID cooties from their inoculated classmates. It claims that a shadowy conspiracy is preventing Americans from accessing reliable treatment for COVID—drugs like President Donald Trump’s favorite bogus cure, hydroxychloroquine—that would make vaccines unnecessary. The lawyers back up their dubious claims in the filing with such references as links to LewRockwell.com, a website founded by a former staffer for the former Texas congressman and doctor Ron Paul (R) that’s run articles suggesting that the HIV virus does not cause AIDS.

To win a temporary injunction, plaintiffs are required to show that they’re likely to prevail in litigation, and that they are at risk of “irreparable harm” if the court doesn’t rule in their favor. It’s a tough sell for the doctor plaintiffs in the case. Much of the injuries the plaintiffs allege they will suffer if the EUA is not blocked are purely reputational—i.e., the doctors spearheading the effort fear people will think they’re kooks and find other providers or report them to the state medical board for giving bad advice if they don’t back the vaccine for kids.

But the reputation of some of the doctors involved in the suit were on the bubble long before the legal motion was filed. One of the plaintiffs is Dr. Scott Jensen, a former Minnesota Republican state legislator who’s now running for governor and has been accused of peddling conspiracy theories about COVID. People did in fact complain about him to the Minnesota state medical board last summer, when it announced it was investigating him for publicly questioning whether state and federal officials had conspired to inflate COVID death numbers and for giving reckless medical advice comparing COIVD to the flu, comments that conspiracy theory sites like InfoWars helped turn viral. (Jensen claims the board dropped the investigation a few weeks later without taking any action.)

America’s Frontline Doctors, an organizational plaintiff in the case, also has a dubious reputation. White-coated physicians affiliated with the group, including Gold, appeared on the steps of the Supreme Court last summer and held a press conference where they promoted hydroxychloroquine, declared that masks don’t work, that COVID isn’t deadly and a host of other misinformation. President Trump retweeted a video of the event that went viral, generating nearly 20 million or so views before big social media companies took it down for spreading misinformation. Many of the doctors in the video had never treated a COVID patient (several were ophthalmologists). One was a Houston doctor who believes that some gynecological problems can be caused by having sex with demons. And of course Gold, the group’s founder, was indicted in February and is awaiting trial on criminal charges after she joined the mob entering the US Capitol on January 6 and gave a speech in the middle of the Rotunda. It’s hard to see how the EUA allowing teenagers to get vaccinated is going to further tarnish their reputations.

Likewise, the parent-plaintiffs in the case also have an uphill battle in proving they have any sort of injury that would give them standing in court to bring such a legal action. That’s largely because no child in America is being forced to get the vaccine. But now that the FDA has authorized the vaccine for young people, parents in the case argue that they have been grievously harmed because their kids might be ostracized if they don’t get it.

One of the plaintiffs, Kentucky resident Matt Schweder, claims his daughter is “subjected to a barrage of peer pressure regarding vaccinating, which is a constant source of conversation for her friends, who have been taught to fear that which should hold no fear. In addition, her school system bombards her with weekly emails, pressuring and shaming her and her family into allowing themselves to be experimented on with the experimental COVID-19 injections.”

The plaintiffs might be right about the risk of public shaming, but a school email does not a legal injury make, and the judge is likely to dismiss the motion post haste.