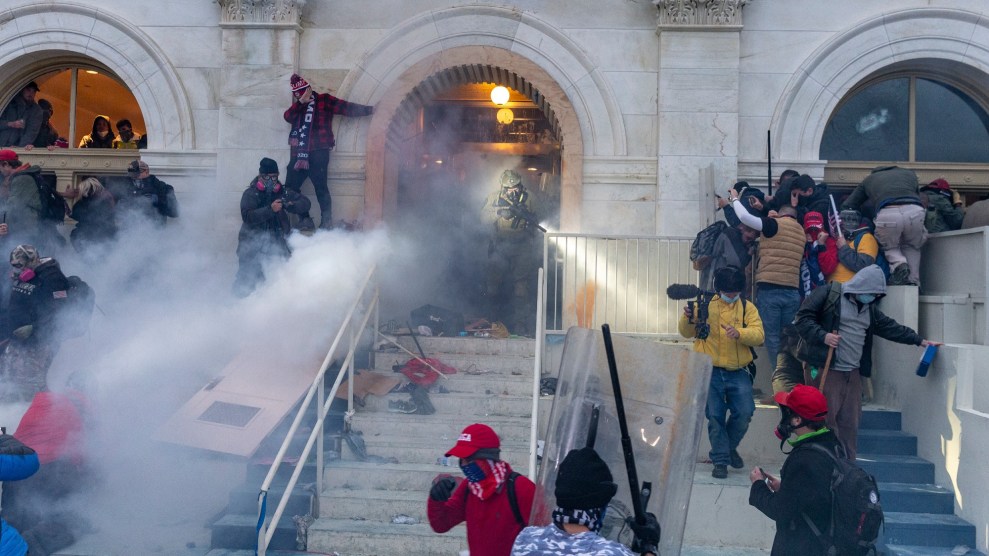 On January 6, the day Congress was scheduled to certify the electoral votes in the 2020 presidential election and declare Joe Biden the victor, thousands of supporters of President Donald Trump stormed the US Capitol. They looted congressional offices, vandalized the building, and assaulted hundreds of law enforcement officials. The insurrection left five dead—including Capitol Police officer Brian Sicknick—and marked a dark day in the history of the United States. Among the countless photos that went viral was one of a man flying a Confederate flag inside the Capitol. That such a symbol was still proudly waved in America only foreshadowed the egregious whitewashing to come.

Rewriting history is a staple of American mythology. Across the country, one can find people who sincerely believe that slavery wasn’t that bad, the Civil War was fought over states’ rights, and that, had he not been murdered by a racist, the Reverend Dr. Martin Luther King Jr. would’ve been a Republican today. American exceptionalism requires recasting the particularly ugly parts of our past into rosier scenarios. And now, just a few months after the insurrection at the Capitol, the Republican Party has laid the groundwork for repeating this grand tradition, creating their own version of the Lost Cause narrative from the Civil War.

It’s not quite right to say that the Republican Party is living in an alternate reality. They actually experienced the reality that they have now chosen to completely reframe. At a House oversight committee hearing last week, Rep. Andrew Clyde (R-Ga.) sought to dramatically downplay the severity of the attack on January 6, comparing an armed mob to a “normal” visit by tourists. “As one of the members who stayed in the Capitol and on the House floor, and who with other Republican colleagues helped barricade the door until almost 3 p.m. that day from the mob who tried to enter,” he said, remaining grounded in reality thus far, “I can tell you, the House floor was never breached, and it was not an insurrection.”

It’s quite an imaginative leap to be one of the lawmakers forced to barricade a door while a violent mob attempted to break through and still claim that the mob’s actions did not constitute an insurrection. But he was far from alone in this new appraisal of the event. As impressive as his mind-bending argument was—smashing windows and beating cops with flag poles was just another day at the American parliament—the GOP’s nearly unanimous attempts to engage in massive historical revisionism has one familiar precedent. If 156 years after the Civil War, millions of people believe that the Southern states were fighting for “states’ rights,” then surely today’s GOP can also convince them that the January 6 insurrection was just another protest.

Technically, the Confederacy only lasted four years, but in practice white supremacists have kept the dream of a pro-slavery state alive through the collective myth known as the Lost Cause. There are a few components to this cherished dogma. First is the racist belief that the Southern states that seceded from the Union in the run-up to the Civil War were righteous and justified and did so not to preserve slavery as an institution but as an assertion of constitutionally guaranteed state’s rights. This belief was further buttressed by the fact that Reconstruction—which was an attempt to reunite the country after the war and end discrimination against the newly freed people—was largely a failure. The failure of Reconstruction then further legitimized the fantasy that in the end the South was sort of right all along.

After the Civil War, former Confederate states were readmitted fairly quickly, a ban on former Confederate soldiers serving in the government was short-lived, and white vigilantes and paramilitary groups wreaked havoc across the states. Their approach was to violently overtake governments and kill Black people and any white people politically aligned with them, all the while passing laws that made it impossible for Black people to exercise their civil rights. For the Southerners who continued to champion the myth of the Lost Cause, this era, which was marked by unspeakably horrific violence against Black people, was often conveniently ignored.

Reconstruction expert and historian Eric Foner describes the myth as advancing the proposition that “Reconstruction was a vindictive effort by Northerners to punish white Southerners, that Black people were incapable of taking part intelligently in a democratic government. And therefore, the overthrow of Reconstruction was legitimate.”

“Outright propaganda and lies are being used to unleash the national security state against law-abiding US citizens— especially Trump voters.”

Fast-forward to the weeks and months after the insurrection, during which hundreds of people were charged with crimes ranging from entering a restricted building to assaulting law enforcement officials in connection with the insurrection. For some Republicans, however, the suspects are the real victims. “Where is the outrage about young people being unfairly treated?” Rep. Louie Gohmert (R-Texas) asked at the same hearing. “Joe Biden’s Justice Department is criminalizing political protest.” This is rich coming from the political party that has dozens of proposed bills that stifle free speech and criminalize protest. It’s also the first of what I assume will be a deluge of attempts to rewrite history.

Rep. Paul Gosar (R-Ariz.) also believes the insurrectionists are the real victims. “Outright propaganda and lies are being used to unleash the national security state against law-abiding US citizens—especially Trump voters,” he said at the hearing. “The FBI is fishing through homes of veterans and citizens with no criminal record and restricting the liberties of individuals that have never been accused of a crime.”

One possible strategy to set the record straight would be for Congress to form a commission to investigate what happened on January 6. Democrats are in favor of doing this and advanced legislation to create such a body. Unsurprisingly, the majority of Republicans, many of whom still believe Donald Trump won the election, are against it. A factual record would directly contradict the lies they’ve already told and will continue to churn out. House minority leader Kevin McCarthy (R-Calif.) opposed the idea of focusing only on what happened on January 6, because he disingenuously argued that the commission should look into “left-wing” violence like Black Lives Matter or other antiracist groups. “Given the political misdirections that have marred this process, given the now duplicative and potentially counterproductive nature of this effort, and given the Speaker’s shortsighted scope that does not examine interrelated forms of political violence in America, I cannot support this legislation,” he said in a statement.

Obviously, there is no reason to investigate liberal groups; the January 6 attackers had just come from a Trump rally during which the ex-president encouraged them to go to the Capitol. They were wearing Trump hats and waving Trump flags. But in order to reshape the history of what happened that day, the GOP wants to downplay it or even outright deny that it was an insurrection. It’s in this denial that the parallels between Reconstruction and the Capitol attacks are most worrisome. If Republicans succeed the way the South did during the Reconstruction era, the future story of January 6 will not be that it was a violent white supremacist attack on democracy, but rather that it was a heroic tale, a venerated Lost Cause for modern times.