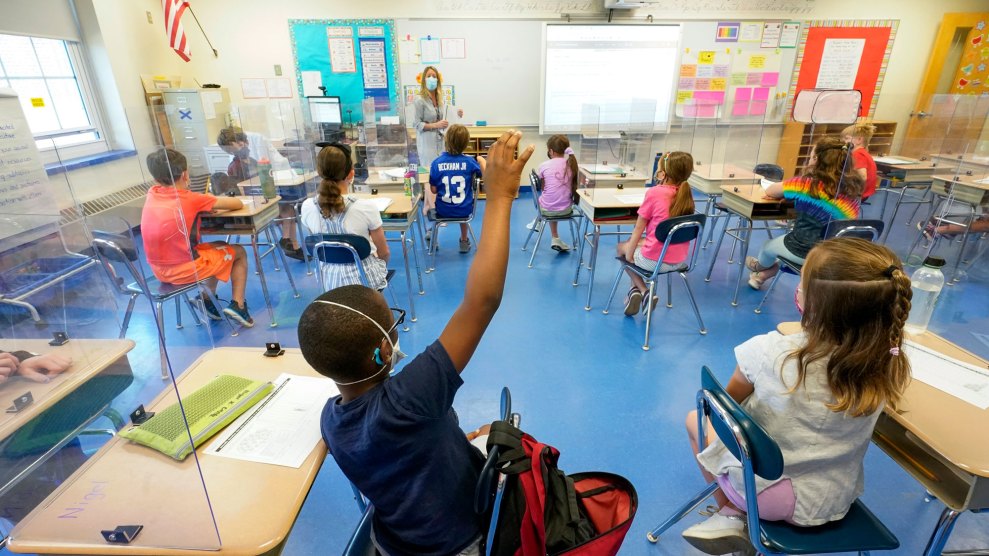 In response to a push for culturally responsive teaching that gained steam following last year's police killing of George Floyd, Republican lawmakers and governors have championed legislation to limit the teaching of material that explores how race and racism influence American politics, culture and law. Mary Altaffer/AP

In Florida, the state’s board of education, at Republican Gov. Ron DeSantis’ urging, adopted a rule on Thursday banning the teaching of critical race theory and the 1619 project, a Pulitzer Prize-winning project led by writer Nikole Hannah-Jones to reframe American history through the lens of the moment enslaved Africans first landed in the United States. In Nevada, even as Gov. Steve Sisolak signed legislation that incorporated multicultural education into the state’s social studies curriculum, a conservative advocacy group in Reno decrying critical race theory in the state’s schools suggested that teachers wear body cameras to stop “activist teachers pushing politics in the classroom.”

This fixation on stopping the teaching of critical race theory in schools has been going on for months: The Associated Press reported that at least a dozen states have either considered or signed laws that limit the teaching of ideas tied to critical race theory, an intellectual framework by the late Harvard Law professor Derrick Bell and carried on by scholars like Kimberlé Crenshaw that argues racism has always been a foundational part of the United States, and that to understand racism you need to apply the lens of race to all structures of American society, including its laws and policies.

One of the problems, and there are many, with this latest Republican obsession to frame anti-racism teaching as a bogeyman is that it seeks to impose broad, vague prohibitions on how racism is taught in America’s schools and cites a specific line of academic inquiry as a proxy for preventing schools from teaching a more raw, less whitewashed framing of American history. And conservatives have leveraged outrage over such teaching to enflame a culture war on schoolhouse grounds as a way to denigrate any conversations about race and equity—an effort that could have long-term ramifications not just for students in classrooms but the American public.

As the Atlantic‘s Adam Harris points out, the bills are unlikely to withstand legal scrutiny since they infringe on basic free speech protections, which is ironic coming from a party that often advocates for freedom of expression. As Harris writes:

Most legal scholars say that these bills impinge on the right to free speech and will likely be dismissed in court. “Of the legislative language so far, none of the bills are fully constitutional,” Joe Cohn, the legislative and policy director of the Foundation for Individual Rights in Education, told me, “and if it isn’t fully constitutional, there’s a word for that: It means it’s unconstitutional.” This does not appear to concern the bills’ sponsors, though. The larger purpose, it seems, is to rally the Republican base—to push back against the recent reexaminations of the role that slavery and segregation have played in American history and the attempts to redress those historical offenses. The shorthand for the Republicans’ bogeyman is an idea that has until now mostly lived in academia: critical race theory.

The attacks and ire directed at the broad label of critical race theory are confusing, and that’s ultimately the point: It creates a banner for conservatives who oppose a realistic, anti-racist interpretation of American history to rally against it for political gain. It not only seeks to prevent schools from interrogating racism but also bars equity initiatives that discuss systemic racism. A moment during an “Education, Not Indoctrination” rally this week in Loudin County, Virginia, showed just how much critical race theory is getting used as a means to prevent equity altogether. This month, Loudin County parents sued their school district over its equity initiatives, alleging that administrators violated students’ rights by going “all-in on a curricular framework that expects students to speak, act, and think in line with a particular ideology.”

“Our education leadership denies it, but equity is critical race theory dressed up pretty. It sounds lovely—equity—but it is poison,” Monica Gill, a teacher at Loudoun County High School, said during a rally. “Because equity is not about equality of opportunity, which is foundational to American political culture and economic strength. It is about equal outcomes, which is foundational to Marxist political ideology.” But that misreads any frank interrogation of America’s history and its embedded structural racism as a threat to capitalism.

When asked about the most troubling thing politicians get wrong about critical race theory, Dr. Ibram X. Kendi, author of How to Be an Anti-Racist, told MSNBC contributor Jason Johnson it is the notion that critical race theory attacks white people, rather than interrogates structures of racism.

“So if you’re white and you’re being told by elected officials or even the media that critical race theories are out to go after white people, then I could understand how people would be concerned about that,” Kendi said. “But it’s a very different thing when a theory and critical race theorists are focused on challenging structural racism. And I think that that’s been very troubling.”