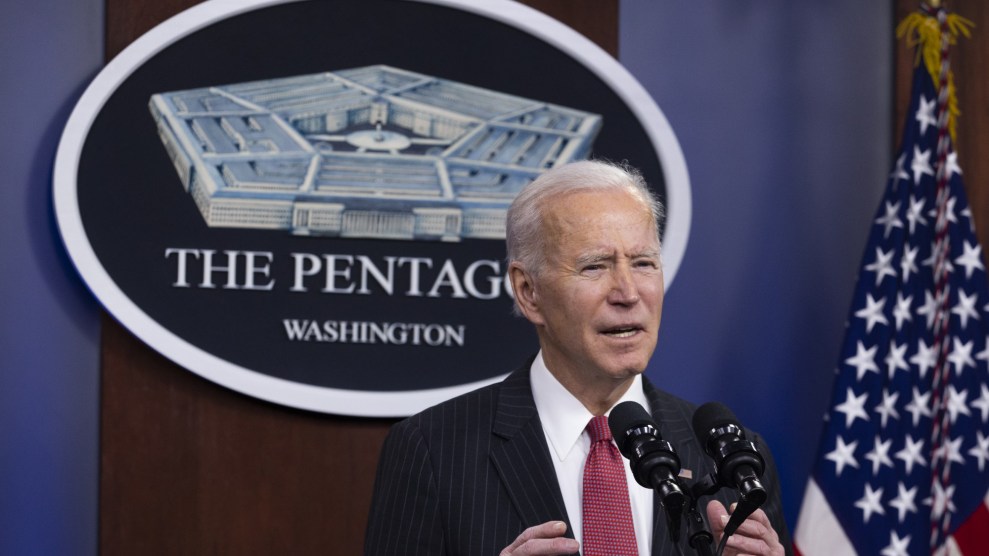 When Joe Biden was elected president, critics of nuclear proliferation had high hopes. Here was a president who had gone on record opposing wasteful spending on nuclear weapons, someone who had warned of the risks of an arms race days before Donald Trump took office. During the 2020 campaign he even told the Council for a Livable World, a disarmament advocacy group, that the United States “does not need new nuclear weapons.”

Then on May 28, the Biden administration released its first Defense Department budget proposal, promptly dashing hopes from progressive activists and nonproliferation advocates. Biden asked Congress for $43.2 billion in nuclear spending, a slight decrease from Donald Trump’s $44.5 billion request last year. But instead of ending Trump’s more controversial programs, Biden committed to funding them at or above the level Trump’s last budget recommended. “They didn’t cancel any programs,” Kingston Reif, the Arms Control Association’s director for disarmament and threat reduction policy, told me. “They didn’t change the funding portfolio for any major modernization effort, as far as I can tell.”

The decision that most baffled activists was Biden’s request for $5.2 million to develop a nuclear sea-launched cruise missile (SLCM). The idea is one of several requests in Biden’s budget that was adopted from Trump’s Nuclear Posture Review in 2018, which argued for more spending on new and existing nukes to combat Russia and China.

Barack Obama’s administration retired the program more than a decade ago before Trump ultimately revived it. Activists view the SLCM as an unnecessary, redundant program that isn’t worth the high cost and bureaucratic hassle of equipping Navy vessels for its use. The Navy, somewhat surprisingly, seems to agree. Days after the release of Biden’s budget, acting Navy Secretary Thomas Harker sent a memo calling for the program to be defunded.

In an organization as large and unwieldy as the United States military, these kind of disagreements are not unusual. But they also raise the possibility that Biden’s budget proposal may not reflect his—or the military’s—final opinion on nuclear policy. It could simply be the result of, as Reif put it, a “turbulent” transition from the Trump administration and a desire to maintain a “holding pattern” until Biden completes his own nuclear posture review. Not much has been revealed about the review since Leonor Tomero, a Defense Department official specializing in nuclear and missile defense policy, revealed its existence in May at a congressional hearing.

When asked during a congressional hearing last Wednesday about the decision to keep funding several of Trump’s weapons programs, Office of Management acting director Shalanda Young said, “The president remains committed to taking steps to reduce the role of nuclear weapons in our national security strategy.”

All this funding for a program that, if used, would signal the dawn of a nuclear apocalypse.

Activists are not too assured that Biden will back up his previous words with action. For one thing, his administration waited until nearly Memorial Day to release his budget proposal—much later than any president’s budget in recent memory. His budget also projects higher expenses than what Trump’s own budgets anticipated, a sign that the Biden administration remains committed to these programs despite cost overruns. In some cases, Biden is planning to spend vastly more than Trump.

Tom Collina, director of policy at the Ploughshares Fund, which opposes nuclear proliferation, called Biden’s budget “disappointing” and predicted not much of a shift from the last administration. “Budgets are policy,” he said. “If I were a betting person, I would bet on the policy and the budget, not statements made as a candidate.”

Last summer, the Democratic Party adopted a platform calling Trump’s push to build new nukes “unnecessary, wasteful, and indefensible,” yet in Biden’s first budget, he not only continued every major nuclear programs endorsed by Trump, but even signed off on huge funding increases for them. For example, the Biden administration’s budget for the Energy Department estimates that it will cost $11.1 billion to produce plutonium pits at a government site in South Carolina, more than double what the Trump administration projected.

Last year, Trump requested $31 million to sustain the nation’s stockpile of the B83-1 bomb, a nuclear weapon roughly 80 times more powerful than the bomb dropped on Hiroshima. Trump agreed to extend the lifespan of the program last year and now, with Biden in office, the Energy Department is requesting $98.5 million to sustain it—more than three times as much as Trump. All this funding for a program that, if used, would signal the dawn of a nuclear apocalypse.

The soaring funding reflects not only a renewed commitment to expanding the US arsenal of nukes, but an unsustainable rise in the cost of nuclear modernization itself. The Congressional Budget Office estimated in 2019 that the US would spend $494 billion on nuclear weapons over the next decade. Only two years later, that estimate has increased by $140 billion. Part of the problem stems from inflation, but the cost of producing and maintaining nukes has simply increased as the government’s systems grow older.

Solving the problem would require collective recognition from the the White House, Pentagon, and Congress to rein in costs, but there is little incentive to do that when there are economic benefits to a fat budget for nuclear weapons. In Congress, a so-called ICBM Coalition (named after the inter-continental ballistic missiles that carry nukes) has campaigned to keep spending high. Composed mostly, but not exclusively, of Republican senators from states where ICBMs are produced or stored, this group has pushed to ramp up spending on nukes like the SLCM, a “low-yield” weapon that causes less damage than something like the B83 gravity bomb, which is a “high-yield” weapon. (This distinction elides how dangerous all modern nuclear weapons are. Even the least powerful nukes in the US stockpile are several times more powerful than the bombs dropped on Hiroshima and Nagasaki.)

In 2019, when debating the defense policy bill that lays out the Pentagon’s annual priorities, House Democrats voted to deny authorization for a different kind of low-yield weapon—the W76-2 nuclear warhead. At the time, House Armed Services Committee Chair Adam Smith (D-Wash.) said the decision would stop “some nitwit over at the Pentagon” from initiating a nuclear war.

That provision—along with several other policy priorities pushed by progressives—was stripped from the final version of the bill thanks to the Republican-controlled Senate and the W76-2 was deployed last year. Now a Democrat controls the White House and is continuing the same program his party voted against two years ago. (The language around nuclear policy can be disturbingly lighthearted given the wonky—and terrifying—nature of the subject. Low-yield warheads are dubbed “baby nukes.” The SLCM is a “slick-’em.”)

Biden faces razor-thin margins in both chambers of Congress and progressive Democrats—however inclined they may be to buck him on nuclear spending—do not seem likely to have the votes to challenge Biden given that the annual defense bill often passes with bipartisan majorities. That doesn’t mean they won’t try. Shortly after the budget’s release, several congressional Democrats, including Rep. Ro Khanna (D-Calif.) sounded off to Politico in disappointment. Khanna, a progressive member of the House Armed Services panel, criticized the decision to spend money “on new destabilizing weapons when we can extend the lifespan of the ones we already have for much cheaper.” Last year, he proposed an amendment to the defense policy bill that would have shifted $1 billion in nuclear spending toward pandemic relief. It was voted down by the Democratic-controlled committee.

“Why are we unnecessarily spending $100B on new nuclear weapons when we don’t have to?” Khanna tweeted last week. “New & costly ICBMs will not improve our deterrence. The $$ we save should instead be spent on threats we are actually facing like climate change and pandemics.”