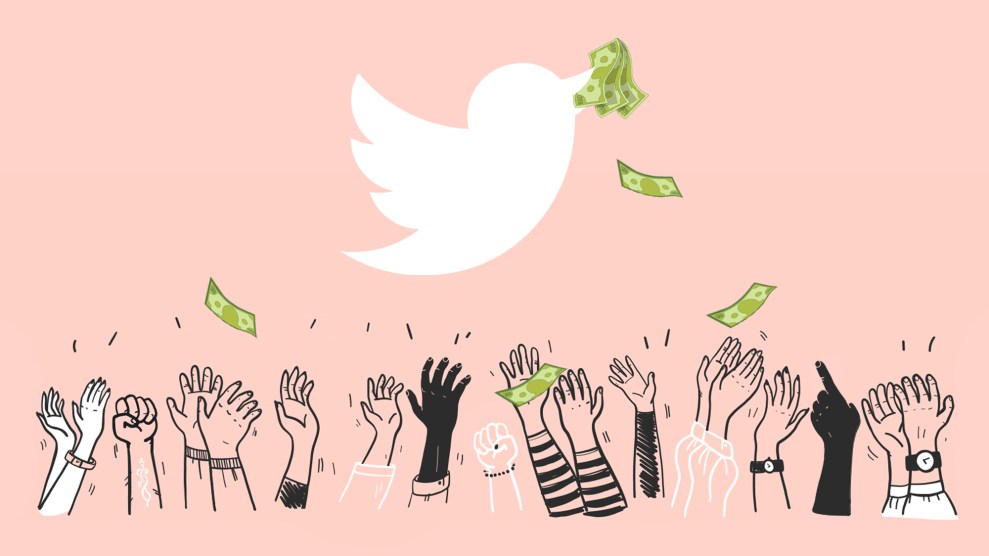 When Tralana Mace, a special education teacher in York, Pennsylvania, got a message on Twitter in March telling her she’d won $10,000, she broke into tears.

In the midst of a global pandemic that had pummeled so many lives, the 38-year-old had gone through a divorce, adapted to virtual teaching, gotten a second job at a gas station to pay off outstanding bills, taken on solo parenting, and then, on top of it all, learned that she had skin cancer. Now, she’d won the kind of money that would mean she could finally wipe out her debt, take time to heal from her surgeries, and just take a breath. “Is this real?!?!?!” she typed back. Soon, the money landed in her PayPal account. “I can’t say thank you enough,” she wrote. “Yesterday I worked 7:45a to 11p and I’m just so tired. Now I can quit my part time job and just be a teacher and a mom again.”

Mace was the latest beneficiary of charity by the Twitter account @Pulte. The account started giving money away on Twitter about six months before the coronavirus arrived in the United States and now has nearly 3 million followers. It’s run by Bill Pulte, a multi-millionaire and the self-anointed founder of “Twitter philanthropy.” Pulte is the CEO of his own private equity firm and the grandson of the founder of PulteGroup, a home construction company currently worth more than $14 billion. He has spent much of the pandemic building a social media empire around giving away, by his count, more than $1 million of his own money, in the middle of an economic crisis where need has been especially acute.

Pulte’s tagline on Twitter is “Giving money, food, and rent to people in need.” Hundreds or thousands of people respond to the near-daily tweets where he offers up these funds, spilling their personal struggles in hopes of winning cash. Pulte’s account has helped hundreds of such respondents and has undoubtedly started a movement: His venture has spurred lots of copycats who are amassing their own viral followings through Twitter giveaways.

His popularity has been fueled by a moment when unmet need in the pandemic-battered economy is still quite high, and debates about how best to fill it have consumed politics. While Washington has seen repeated partisan fighting over government assistance, Pulte has made clear that he believes his form of giving is often superior to federal aid—that relying on the generosity of wealthy Americans is better than raising taxes on them to help far larger numbers of people.

“Meeting the basic needs of people can’t ever be fulfilled through idiosyncratic giving responses.”

Through it all, his audience has ballooned, fueled by the hopes of hundreds of thousands of followers that they might one day be the lucky name that Pulte picks from the Twitter masses to bestow with money to cover the basics. And as many pandemic government aid programs, from enhanced unemployment to the eviction moratorium, are set to end this summer and fall, Twitter philanthropists may face even more need in their feeds.

“In economic circumstances such as we live in today, in which desperate need has gone up, meeting the basic needs of people can’t ever be fulfilled through idiosyncratic giving responses,” says Rob Reich, a Stanford University political scientist who recently published a book about philanthropy. “There are alternative and more systematic mechanisms for meeting basic needs.”

Pulte’s giveaways work like this: They are often centered around a theme, like helping with medical expenses, food, student loans, or even classroom supplies for teachers. (A giveaway on the latter theme was how Mace first found out about his account.) He requires relatively little from those who want a chance to win. On most days, Pulte simply tweets a plan to give out a certain amount and asks his followers to retweet to enter the drawing—or sometimes to reply to a specific prompt. His tweets amass tens of thousands of retweets and responses from hopeful recipients in mere seconds.

I’m going to give $10,000 to someone random who retweets this tweet in the next 24 hours and shows that they listened to the podcast in my bio! (must be following me so I can dm you if you win!) Good luck!

Within a day, Pulte picks the winners, tracks them down via direct message, asks them to complete tax forms and to tweet about their winnings, and then announces the giveaway to the world on his Twitter feed, garnering thousands of likes, and replies from those hoping they’ll be next.

I got in touch with the $10k winner, and she has been paid (proof below)! Congrats to you! Many more givings soon! 💸❤️ https://t.co/lore93vXoA

The popularity of his account has exploded during the pandemic, highlighting the gaps in existing government aid during the COVID recession. “It’s a sad statement on the support that people feel like they have,” says Claudia Sahm, a senior fellow at the Jain Family Institute who also served as a senior economist on President Obama’s Council of Economic Advisers. “This is underscoring the fact that people are falling through the cracks, and the safety net isn’t enough, especially in a time of crisis.”

During COVID, that federal safety net has been marked by a shift to more direct aid with fewer strings attached. Though one-time direct payments—like pandemic stimulus checks—have been used in previous recessions, in this one the federal government approved an unprecedented three rounds of such checks, money that went unrestricted into most families’ bank accounts. Similarly, the Biden administration’s stimulus package temporarily boosted the child tax credit, turning it into a monthly per-child payment applied universally to all but the highest-income families with children. (The administration has said it hopes to make the credit permanent.)

Pulte believes that his approach is often more effective than lawmakers’, tweeting that “we do many things BETTER than government.”

These sorts of broad, upfront payments represent a marked departure from the philosophy behind most safety net programs, which have long delivered benefits that are restricted to lower-income Americans and come with strings attached, like work requirements, or arrive after the fact in the form of tax credits. During the pandemic, these direct funds have been enormously effective in softening the blow of the economic crisis by helping families pay monthly bills, buy groceries, and spend money in other ways that boost the economy.

The efficacy of these cash transfers during the pandemic has led to growing enthusiasm for what has long been a hotly debated form of social welfare: simply giving people money. “There’s been a big shift in openness to cash benefits,’” says Sahm.

Pulte’s own approach is essentially a randomized, privatized version of such cash transfers. He has said he was inspired to start giving away money on Twitter by the idea of universal basic income—the proposal of a guaranteed monthly government check for all American adults popularized by Silicon Valley entrepreneur Andrew Yang during his 2020 presidential campaign. But very little of how Pulte distributes help is anything like a guaranteed government benefit. Pulte employs a team of people who help him pick the recipient, but the criteria they use are unclear. (Pulte has said that they seek to verify the hardship claims of followers entering giveaways, but again, it’s unclear how they do this. Pulte did not respond to requests for comment.) The arbitrary nature of these giveaways is precisely what makes them less effective—and a poor substitute for government aid.

“It’s great what he’s doing, but he’s picking the winner and the loser,” says Sahm. “If we want to support people in a time of need, it ought to be systematic, equitable access. And not be like a casino, where you’re taking a spin on the wheel.”

Yet Pulte has made clear that he believes that his approach is often more effective than lawmakers’ at helping people in need; at one point, he tweeted that “we do many things BETTER than government.” When he’s made political donations over the years, they’ve been exclusively to Republicans, whose party opposes the kind of higher taxation of the wealthy that would enable more systematic government aid. In an appearance on Fox News in 2019 in which he was asked about Sen. Bernie Sanders’ proposal to more heavily tax billionaires, Pulte said that instead, the tax code should enable more private philanthropic giving, because “billionaires and millionaires are willing to give their own money.” In the end, he says, less taxation and more philanthropy will enable his Twitter movement to help the people left behind. “We can agree that the government isn’t able to get to everybody, billionaires aren’t able to get to everybody,” he says. “What we’re trying to show is that we can use technology to do it.”

But using technology—in this case, his Twitter account—does not actually help Pulte get to everybody. Far from it. As the pandemic has exacerbated housing instability, hunger, and poverty, the replies to Pulte’s giveaways have offered an endless stream of basic needs that are not being met, no matter how often or how poignantly his followers tweet. For every joyful story like Mace’s, there is tweet after countless tweet from people whose rent is due, who need some cash for groceries or for diapers, or who are drowning in medical expenses. What emerges is a sort of hardship Olympics as users divulge their most dire personal struggles in hopes of being noticed. Yet Pulte’s tone throughout feels jarringly peppy. In a tweet announcing funding for a man’s cancer surgery, for instance, Pulte added: “Oh, also, I will be helping more people today! Even those WITHOUT cancer! :))”