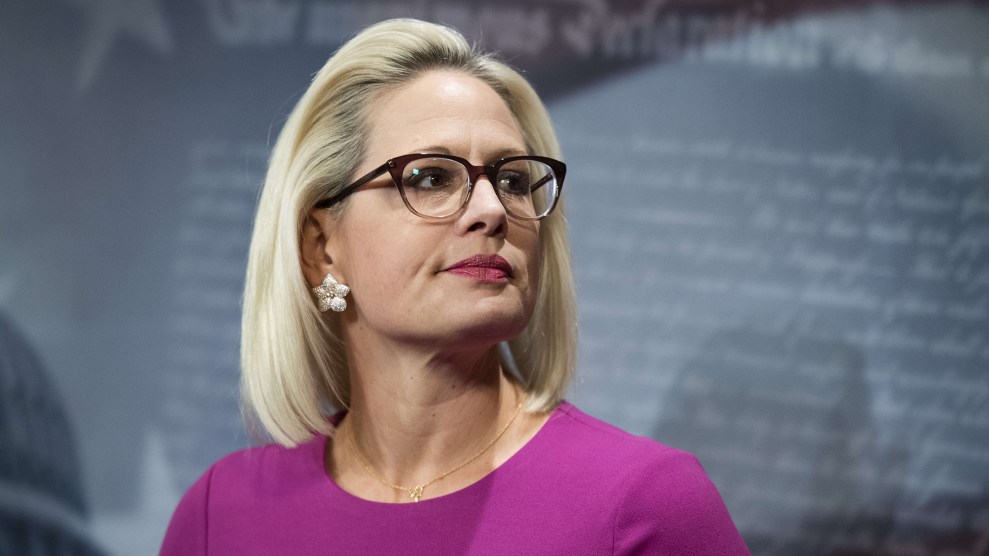 Sen. Kyrsten Sinema’s support for the Senate filibuster appears to be doing real damage to her political brand back home. The first-term Arizona Democrat has often defended the Senate’s 60-vote supermajority requirement as a necessary check on partisan whiplash, arguing that it forces the chamber to put together “durable” coalitions. But according to a new survey shared with Mother Jones from the progressive polling and policy firm Data for Progress, her stance has left her far less popular in Arizona than either President Joe Biden or her recently elected Senate colleague, Mark Kelly—and perhaps even vulnerable to a primary challenge.

According to the survey, which was conducted from June 28 to July 6th, Sinema is viewed favorably by 38 percent of voters, compared to 47 percent for Kelly and 51 percent for Biden—all of whom were elected in recent years by similar margins to Sinema. (Republican Gov. Doug Ducey’s favorability sits at 44 percent.) The numbers are more stark when you look at the partisan breakdown. Sinema is viewed favorably by just 42 percent of Democrats (with 39 percent viewing her unfavorably), while Kelly, who was elected narrowly last fall, is at 75 percent favorability with just 17 percent viewing him unfavorably. Biden? He’s doing just fine according to Arizona Democrats, with 95 percent viewing him positively.

Beyond the toplines, though, there are some ominous numbers for Sinema’s long-term standing back home. Democratic voters overwhelmingly support a $15 minimum wage according the survey; Sinema drew the ire of activists this spring for casting a largely symbolic vote against adding such a minimum-wage hike to the coronavirus stimulus package. They support getting rid of the legislative filibuster and overwhelmingly back the PRO Act, which would expand rights and protections for labor unions, but which Sinema has not signed onto.

After voters were read a script linking the filibuster to Republican obstruction, 66 percent of Democrats said that if given the chance in a 2024 Senate primary, they would “vote for a different candidate who would get rid of the filibuster.”

There’s one silver lining in all these numbers for Sinema. The poll also indicates she’s far more popular among Republicans than either Kelly or Biden. More than twice as popular, in fact. And this isn’t the first recent poll to pick up on such a divide. Another Arizona survey last month—this time of registered voters—showed a similarly stark gap. That survey, from pollster Bendixen & Amandi, found that while Kelly, like Biden, was overwhelmingly popular among Democrats and overwhelmingly unpopular among Republicans, Sinema’s numbers among the two parties were almost identical: She was viewed favorably by 52 percent of Democrats and 51 percent of Republicans.

That’s not a total surprise, given both her current role in Washington as a check on the Democratic party and her longstanding political brand. Although she was once a progressive state legislator who condemned the “false pressure to get to 60” votes for major legislation in DC, Sinema has cultivated a reputation in the Capitol as Republicans’ best Democratic friend—someone who is averse to public expressions of partisanship, and who has called the late Republican Sen. John McCain a political idol. She started a bipartisan spin class while serving in the House, and her ability to win the votes of people who have voted Republican in the past is part of the reason she’s in office now. She has even drawn praise from none other than Jan Brewer, the arch-conservative former governor who was a frequent target of Sinema when the latter was a member of the state legislature.

Sinema won’t be up for reelection for another three years, and there’s a lot that can change for her and her party between now and then. But numbers like these aren’t exactly the kind of thing that will scare any prospective primary challengers away. As Democratic critics in her home state ramp up their pressure campaign and mull whether to back a primary challenge if she doesn’t change her mind, it appears her reputation among her constituents—at least among members of her own party—is starting to take a real hit.