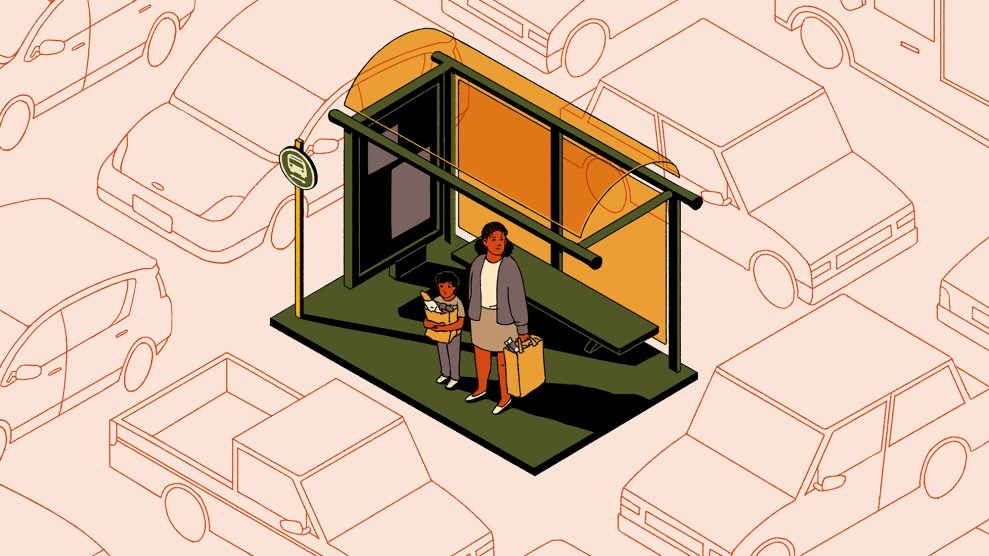 The coronavirus is a rapidly developing news story, so some of the content in this article might be out of date. Check out our most recent coverage of the coronavirus crisis, and subscribe to the Mother Jones Daily newsletter.
Since the arrival of COVID-19, our lives have shifted in ways big and small. Most likely, the pandemic will not end with a bang—we’ll be dealing with some version of it for years to come. As we slowly adapt to our new normal, we’ll embrace some changes and resent others. A few of us at Mother Jones wrote about some of the shifts we’ve noticed in our personal lives and the world around us—from the “love it” to the “leave it” to the “we’re still figuring it out.” Read the rest of the essays here.

This is the year we almost let public transportation die. The cuts that cash-strapped transit agencies proposed before being bailed out by Congress—eliminating 40 percent of New York City’s subway service, a fifth of the DC region’s Metro stations, two-thirds of Atlanta’s bus routes—wouldn’t have been their instant demise, but it was hard to see a way out of the death spiral of mutually reinforcing service cuts and ridership losses.

For white-collar workers tidying up their Zoom backgrounds in their living rooms, the empty tracks were largely conceptual, a hypothetical nuisance in some far-off future that involved getting up off the couch to go to work. But the people running our supermarkets, day cares, and hospitals were already experiencing the very real impact of the deep cuts that had already gone into effect. Lacking other ways to get to work, many of these people—disproportionately Black, Brown, and lower-income—simply left home a lot earlier to endure an extra bus transfer or a longer wait for the train.

Which is all to say that the pandemic has taught us that public transit funding is not just helpful to commuters or vital to a carbon-neutral future. It is a matter of equity. The $30.5 billion for public transit included in the rescue package President Biden signed in March was the biggest subsidy the federal government has ever given our country’s trains and buses. It will get the major urban transit agencies, as well as Amtrak, through the worst of the pandemic-induced dive in ridership. But then they’ll be faced with difficult math all over again, necessitating some combination of higher fares and lower service.

Or not. Other city services aren’t expected to pay for themselves with user fees. When parks or schools or libraries are in need of maintenance, we don’t restrict access to them or charge people more to use them. Instead, we’ve collectively decided that they’re services for the population at large—particularly for those without a golf course membership, private school tuition funds, or a room in the house called the library.

Fortunately, it seems we’re approaching more of a bipartisan consensus on the need for federal transit funding. Biden’s infrastructure plan allocates an additional $85 billion for transit; even the Republican counteroffer includes $61 billion—twice the record-setting amount from the March rescue package. But the country’s public transit systems need steady, dedicated funding to ensure equity, not just infusions of cash in a once-in-a-century pandemic. “This is a grand opportunity,” says Adie Tomer, who runs the Metropolitan Infrastructure Initiative at the Brookings Institution, “to think about a more equitable approach.”

It’s tempting to say that the United States simply can’t hope to have European-style public transit because of our sprawl and car dependence. Yet European and Canadian cities went on the same postwar sprint to suburbanize and build highways; the difference was that they also connected these new suburbs to the urban core by rail. It would be prohibitively expensive to retrofit every US suburb to look like the ones surrounding Munich or Paris. But it wouldn’t be that hard to make them look more like Toronto’s suburbs, which are just as full of cookie-cutter McMansions as many US ones, except they have frequent, reliable bus service. Prior to the pandemic, Toronto’s regional bus service was logging more than 260 million passenger trips annually; in the Dallas–Fort Worth area, which has a bigger population, that figure was only 30 million.

Federal support in the United States has generally been limited to launching fancy new transit projects—say, a light rail that ends up with such a small budget it’s barely useful—rather than maintaining and expanding service on old ones. That money would be better spent making existing bus service widespread and reliable, transit experts say. Buses could not only connect people to the major transit lines heading downtown; they could also link suburbs to one another. That’s vitally important, given that fewer than a quarter of the jobs in major US metros are in the downtown core; 40 percent of commutes are now suburb to suburb. And most jobs effectively require a car, forcing lower-income Americans—who increasingly live in the suburbs—to either stretch their budgets or severely limit their employment options.

“Only buses can effectively deliver anything that looks like equity,” says transit consultant Jarrett Walker. “And yet there’s just been a persistent, relentless disinvestment in their operations.” Walker says he’s often asked to design bus systems on such a meager budget that the buses can only run every 40 minutes. In 2015, Walker helped redesign Houston’s bus network, focusing on providing more frequent service—generally every 15 minutes—in high-ridership areas. With the new map, Houston became one of the few US metro areas with rising bus ridership, though it came at the expense of some service to farther-flung, lower-demand areas.

There’s something for everyone in good public transit. It’s essential to curbing climate change. It’s good business and economics: The American Public Transit Association estimates that every dollar spent on transit generates $5 in economic activity. It makes our urban areas livable and accessible. But the pandemic has highlighted something more fundamental: Many of the people we’ve started calling essential workers simply can’t get by without it.