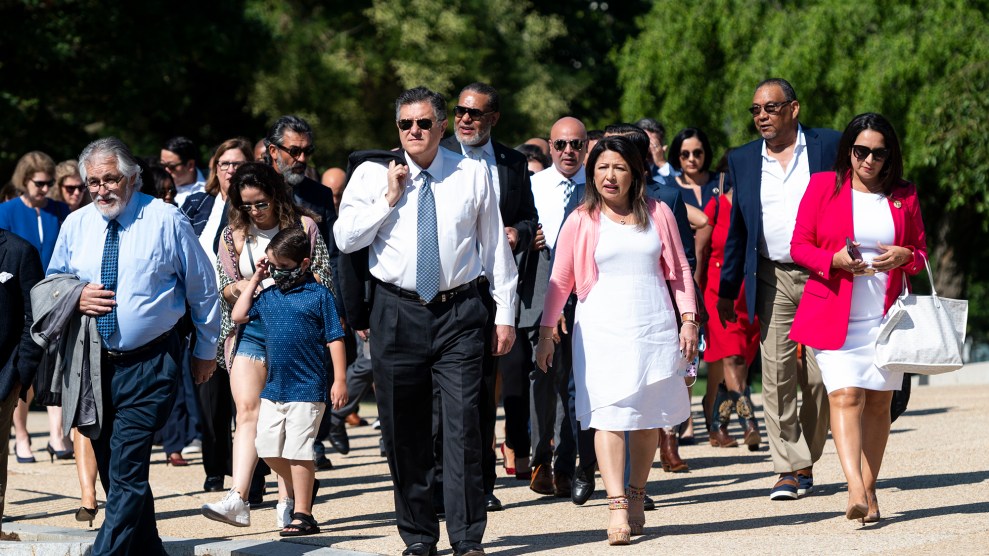 Until this week, there were two parallel fights over voting rights unfolding in the United States. In Washington, DC, Democrats have spent the last few months talking among themselves whether to pass a voting rights package, and if so, what kind of voting rights package they should pass. Meanwhile, in various state legislative chambers, from Phoenix to Tallahassee, Republicans have acted with significantly less hesitation to crack down on voting access under the auspices of “election integrity.” These two fights are in conversation with each other—the attack on voting rights at the state level is, and always has been, the justification for protecting voting rights at the federal level, while the fact that Democrats have been allowed to win elections at all is the impetus for Republicans curbing voting rights at the state level—but they have unfolded in distinct spheres.

But late on Monday, a majority of Democratic members of the Texas House of Representatives, in a bid to prevent Republicans from passing their own crackdown on voting rights by denying the chamber a quorum, boarded a chartered flight to the DC suburbs, a case of Miller Lite in hand, and brought the two realms together at last.

Setting aside the historical revisionism contained within that statement—Sam Houston’s military career, as many were quick to point out, consisted largely of running away—Cornyn has more in common with his fellow Texans visiting DC than he lets on. After all, he too is a member of a minority faction of a legislature that’s currently using a procedural gimmick to block the progress of voting legislation pushed by his chamber’s majority. The difference, and it’s a very big one, is that for these Democrats, the act of defying majority rule is both extremely hard and highly visible. There is no small way to flee your state; you cannot avoid creating a huge national story when you do—it is a dramatization of what a legislative filibuster actually does but largely manages to hide.

One of the most insidious things about the legislative filibuster that dominates how the US Senate does business, and which is Cornyn’s tool of choice at the moment, is how invisible it is. For a Senate minority to accomplish definitively what Texas Democrats have gone to great lengths merely to delay—to block a bill supported by a majority of members—a Senate minority hardly has to move. Filibusters used to involve a lot of talking, but senators do not have to go through that charade anymore—in fact, the legislative filibuster as it’s deployed today can be a vote against talking, as it prevents the chamber from moving on to debate. It’s as simple as 41 senators objecting. If senators signal in advance their intention to object, it might not even get to that point.

The result is the Senate often doesn’t even vote on controversial bills; it simply votes against voting on those bills, and then the bill dies and that’s it. The rise of the legislative filibuster—and it is a recent development, no matter what Kyrsten Sinema says—has almost fully dissociated procedural obstruction from the act of obstructing; it is minority rule with an easy button, so normal-seeming that senators such as Sinema can seemingly concoct entire histories about how normal it is without ever really wrestling with the fact that it’s not. And that invisibility is propulsive—it is an incentive to quietly keep doing it; at a certain point, people will stop even taking note.

By going on the lam, Texas Democrats have brought the war on voting and the fight for voting rights under the same roof. Unlike the legislative filibuster, their quorum-break is only a temporary gambit—Republican Gov. Greg Abbott has said he will simply continue calling new special sessions of the legislature if they manage to run out the clock on this one, and with a year-and-half left in the term, the math is on his side. And because of the visibility of the tactic, the onus will continue to be on them to defend and justify their choice to obstruct their chamber.

But maybe there’s another story there too, because the rules that govern how things work in the US Senate and in Austin are themselves political choices. Earlier this year, after Republicans in the Texas state Senate lost the supermajority needed to bring legislation up for a vote without Democratic support, they simply changed the rules to lower the supermajority threshold. This is how governance works in state Capitols. Democrats in Washington, faced with the prospect of nonstop obstruction from a party openly hostile to small-d democracy, have made a different choice.