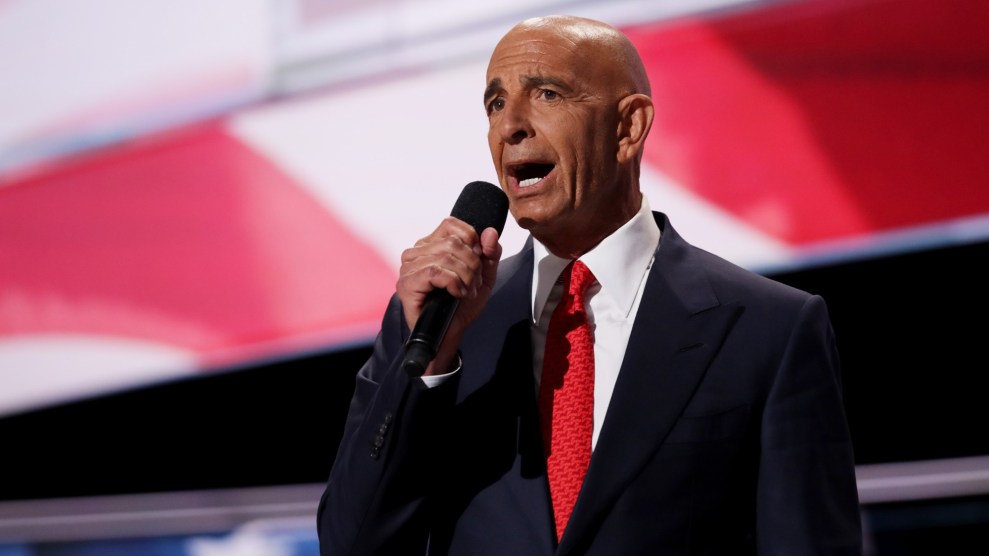 Tom Barrack, a friend and longtime adviser to former President Donald Trump, was arrested Tuesday and charged with violating foreign lobbying laws by using his access to Trump to advance the interests of the United Arab Emirates.

“The defendants, using their positions of power and influence in a presidential election year, engaged in a conspiracy to illegally advance and promote the interests of the United Arab Emirates in this country, in flagrant violation of their obligation to notify the Attorney General of their activities and in derogation of the American people’s right to know when a foreign government seeks to influence the policies of our government and our public opinion,” said Jacquelin Kasulis, the acting US attorney for the Eastern District of New York, where the charges were filed.

“Mr. Barrack has made himself voluntarily available to investigators from the outset,” a Barrack spokesperson said. “He is not guilty and will be pleading not guilty.”

In a press release, prosecutors said that while Barrack advised the Trump campaign in 2016 and then the Trump White House, he maintained backchannel communications with UAE leaders and worked to promote their agenda in Washington. Some of the conduct occurred while Barrack unsuccessfully sought appointment to a top job in the Trump administration, including a post as special envoy to the Middle East. In an April 12, 2017, text message to Alshahhi, Barrack, appearing to seek UAE support, said his appointment would “give Abu Dhabi,” the Emirati capital, “more power.” “Great for u!” Barrack added.

The Justice Department did not explain why Barrack worked for the UAE, but he has longstanding business ties in the Middle East. The New York Times, which reported the foreign lobbying investigation into Barrack in 2019, noted that between Trump’s nomination and the end of June 2019, Colony Capital received about $1.5 billion in investments and other transactions from the UAE and its close ally, Saudi Arabia. This included $474 million in investments from the sovereign wealth funds run by the Saudi and Emirati governments. At the start of the Trump administration, Barrack also pushed to strike a nuclear power deal with Saudi Arabia that would likely have to skirt US laws restricting the transfer of nuclear technology—and that project could well have benefitted Barrack’s business.

In the indictment of Barrack and the others, the Justice Department lists several steps Barrack took that it claims violated the foreign lobbying law. These include:

Barrack first met Trump in 1985 when Barrack sold Trump part of a chain of department stores. In 1987, when Barrack worked for the billionaire Robert Bass, who owned New York’s famed Plaza Hotel, he negotiated a deal to sell the property to Trump—whose office looked down on the hotel—for $407 million. It turned out to be a bad deal for Trump, who lost the property a few years later.

Barrack has been a key player in Trump’s world. He helped Trump land the government contract that would allow him to take over the historic Old Post Office building in downtown Washington, DC, and turn it into the high-end luxury hotel that would become a clubhouse for Republican politicos, lobbyists, and foreign dignitaries hoping to curry Trump’s favor during his presidency. Trump submitted a bid for the contract that competitors said was ludicrously high, but Trump had solid financial backing: Barrack’s Colony Capital had pledged to finance the project. Shortly after Trump was awarded the contract, Barrack backed out—leading some competitors to complain that Trump had pulled a bait-and-switch. Trump borrowed $160 million from Deutsche Bank for the project.

Barrack also helped finance the debt Jared Kushner owed on a skyscraper at 666 Fifth Avenue in New York. As the New York Times reported, “Barrack was among a group of lenders who agreed to reduce Mr. Kushner’s obligations to keep him out of bankruptcy.” He recommended that Trump hire Paul Manafort to help run the 2016 campaign. During the campaign, Barrack attempted to arrange a secret meeting between Manafort and the Crown Prince Mohammed bin Salman of Saudi Arabia. (A scheduling conflict prevented the get-together from happening.)

It was already widely known that Barrack essentially served as Trump’s key contact to the Middle East. “Who Is Behind Trump’s Links to Arab Princes? A Billionaire Friend,” read a New York Times headline. In 2016, Barrack wrote to the UAE’s ambassador to Washington, “I would like to align in Donald’s mind the connection between the UAE and Saudi Arabia which we have already started with Jared.”

The Trump inauguration committee that Barrack chaired—which raised an unprecedented sum—is currently under investigation by the Washington, DC, attorney general for allegedly making about $1 million in allegedly improper payments to the Trump Hotel. During a deposition in that case, Barrack made statements about Trump Organization executive Allen Weisselberg’s involvement in reviewing the finances of the inauguration committee that were contradicted by evidence and other testimony.

The indictment portrays Barrack as a wheeler-dealer who exploited behind-the-scenes diplomacy and his influence with Trump to serve the interests of the UAE  government and his own business endeavors. “Today’s indictment confirms the FBI’s unwavering commitment to rooting out those individuals who think they can manipulate the system to the detriment of the United States and the American people,” said Assistant Director Calvin Shivers of the FBI’s Criminal Investigative Division.