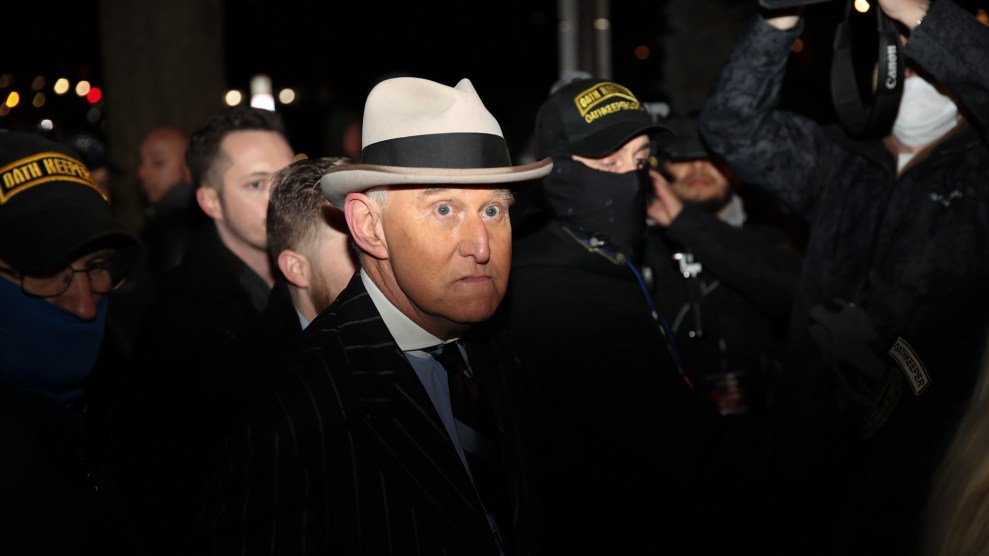 Roger Stone walks to his hotel with Oath Keepers after speaking at Freedom Plaza on January 5, 2021.Tayfun Coskun/Anadolu Agency via Getty

On Monday, the House select committee investigating the January 6 attack on the US Capitol subpoenaed conspiracy theorist and Infowars host Alex Jones and longtime Trump adviser Roger Stone. The panel also issued subpoenas Monday for a current spokesperson for former President Donald Trump, Taylor Budowich, and for a couple who helped organize a January 6 rally that proceeded the riot, Dustin Stockton and Jennifer Lawrence.

Stone and Jones both actively supported Trump’s false claims that election fraud cost him the 2020 election, and they each gave incendiary speeches on January 5 at a rally in Freedom Plaza near the White House.

“This is nothing less than an epic struggle for the future of this country between dark and light, between the godly and godless, between good and evil,” Stone said at that event. “And we will win this fight or America will step off into a thousand years of darkness. We dare not fail.”

“I don’t know how this is all going to end, but if they want to fight, they better believe they’ve got one,” Jones told the crowd.

The House committee indicated its members want to question the two high-profile figures regarding various steps they took leading up to January 6. On a “Stop the Steal” website prior to January 6, Stone had requested contributions “for private security at every one of our events, as well as funds for permits, staging, transportation, and legal fees.” He has not disclosed how much money he raised from the effort or what he did with the funds. On January 5 and 6, and at Stop the Steal events in preceding weeks in Florida, several Oath Keepers who were later charged with taking part in the attack on the Capitol acted as a security detail for Stone.

For his part, Jones personally pledged more than $50,000 to help fund the January 6 rally, and helped to convince Julie Jenkins Fancelli, a prominent donor to the Trump campaign and heiress to the Publix Super Markets chain, to give about $300,000 to cover most of the cost of the event, the Wall Street Journal reported.

Both Jones and Stone were ultimately scratched from the list of speakers preceding Trump at the January 6 event, reportedly leaving both men incensed. Stone left Washington without attending Trump’s speech. Jones joined demonstrators who marched toward the Capitol. Though Jones did not go into the Capitol Building, he entered a restricted area outside,  where he made impromptu remarks. The Justice Department in August charged a man who was standing next to Jones near the top of the stairs on the east side of the Capitol with entering a restricted area. Jones himself has not been charged. He has insisted that he urged members of the crowd outside the Capitol to remain peaceful, and he denied wrongdoing.

Among the other targets of the latest subpoenas, Stockton and Lawrence joined in a bus tour in swing states in the weeks after Election Day 2020 to push false claims of election fraud, and promoted the January 6 rally in the weeks ahead of it. They have previously volunteered to cooperate with the select committee, Politico reported. In a letter to Budowich, the committee said that they had evidence he had “solicited” an unnamed nonprofit organization to “conduct a social media and radio advertising campaign to encourage people to attend” the January 6 rally, and that “your efforts included directing” to the organization “$200,000 from a source or sources that was not disclosed to the organization to pay for the advertising campaign.”

As Trump’s spokesperson, Budowich has responded to media inquiries about the January 6 attack.

Jones, Stockton, Lawrence, and Budowich could not be reached for comment. In a statement Monday, Stone declared that he has “said time and time again that I have no advance knowledge of the events that took place at the Capitol” on January 6. He said he had not yet been officially served and would consult with his counsel before deciding how to respond.