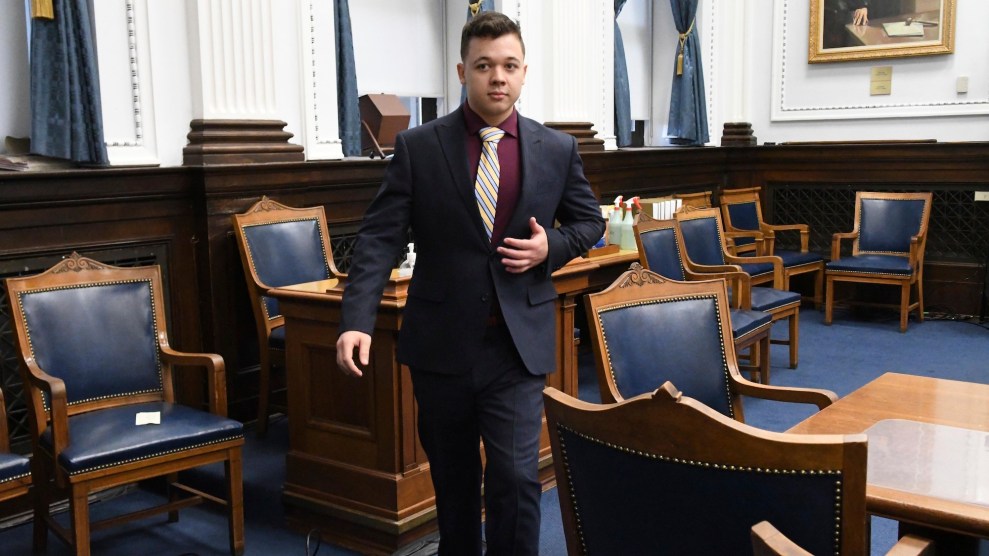 As the jury deliberated in the Kyle Rittenhouse trial this week in Kenosha, Wisc., one pro-defense protester outside of the courthouse openly carried an AR-15 and “screamed obscenities about the Black Lives Matter movement,” The Washington Post reported. He turned out to be a former police officer in Ferguson, Mo., “where he joined the department after the fatal police shooting of Michael Brown in August 2014.” The man had “traveled all the way from Arizona to support constitutional rights, and the right to self-defense,” he wrote in a text message to the Post.

That scene—a traveling vigilante brandishing an assault rifle, seething with rage against critics of racist police violence—neatly sums up the implications of the jury’s decision to acquit Rittenhouse on all charges for shooting three people, killing two, with with an AR-15 at a Black Lives Matter protest in Kenosha in August 2020. In a nation with startlingly libertarian gun laws, the case represents a legal triumph for advocates of violent vigilantism—an invitation to turn protests into armed street fights. In right-wing circles, the decision cemented Rittenhouse’s status as a folk hero, a young man who knows how to defy the libs.

In the wake of the verdict Friday night, protests broke out in Portland, Ore., Chicago, New York City, Columbus, and Kenosha itself, where “tensions began to boil over outside the courthouse,” The Daily Beast reported.

Those who welcomed the verdict held up a “Free Kyle” sign as they squared off against demonstrators with a “No Justice!” sign, and at least one arrest was made as a small protest began to turn into a shouting match. As police arrived to disperse the crowd, protesters surrounded their vehicles, with one demonstrator chanting, “I’m pissed! I’m pissed!”

Happily, no guns went off.

For his part, the exonerated Rittenhouse is mulling college and a career in nursing, his attorney told reporters Friday. The idea was cooly received in nursing circles.

"Now, the goal is going to be to ensure Kyle's safety as he moves on as an 18-year-old young man in college studying to be a nurse," Hancock told CNN affiliate WBBM.

Nursing must not give this man access to vulnerable patients. He has no concern for life, especially Black lives.

His post-trial prospects look brighter in Washington, DC. US Reps. Madison Cawthorn (R.-N.C.) and Matt Gaetz (R.-Florida) rushed to offer the teenager an internship; and Cawthorn urged his Instagram Live followers to “be armed, be dangerous, and be moral.”

Rep. Paul Gosar, unchastened by his recent censure for graphically expressing murderous thoughts about a fellow House member, jumped into the fray.

Justice was served for #KyleRittenhouse and he is fully exonerated. As I said last year, obviously self-defense.

I will arm wrestle @mattgaetz to get dibs for Kyle as an intern. https://t.co/kon65IB1d9

While Rittenhouse decides whether to head to DC to work for the utterly unhinged House rep of his choosing, the rest of us can be excused for starting to feel a bit of the chill of Weimar Germany, when a hard-right minority pursued an inside-outside strategy to gain power, relying in part on the exertions of street-fighting men not unlike Rittenhouse.