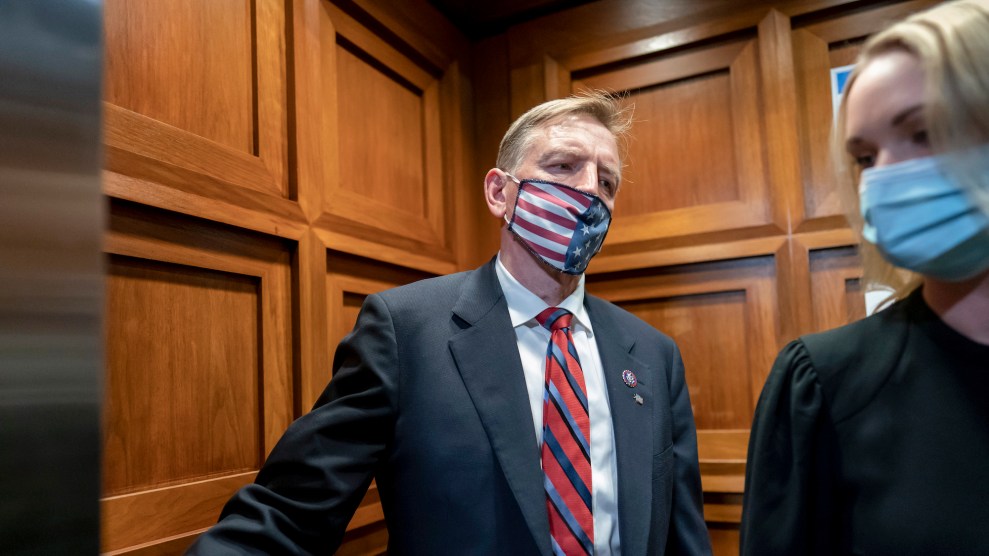 Gosar in the Capitol on the day of his censure, November 17AP Photo/J. Scott Applewhite

For decades, if members of Congress got carried away—if their rhetoric or votes started straying too far from the party line—they were usually quick to retreat under pressure. While there were always party factions or caucuses pursuing their own interests, party leadership expected members to cooperate. Unnecessary controversy and self-serving provocations weren’t in the playbook—go along, to get along, new members were told. A key motivator was campaign finance—it didn’t pay to cause trouble, literally. To secure reelection, members almost always needed help from party leaders who hold the purse strings in the House: those at the helm of the National Republican Congressional Committee (NRCC) and the Democratic Congressional Campaign Committee (DCCC).

The present scandal featuring Rep. Paul Gosar, however, shows how the old methods of financial control no longer work. Gosar, who was censured by House Democrats on Wednesday over a cartoon video recently posted on his Twitter feed depicting the murder of Democratic Rep. Alexandria Ocasio Cortez, just doesn’t need the money that party leaders used to leverage to keep wayward members in line.

Sheila Krumholz, the executive director of money-in-politics watchdog OpenSecrets, says that shift traces back to the Supreme Court decision in Citizens United, which allowed unlimited amounts of money to flow to outside spending groups, such as the super-PACs that can upend a race without notice so long as they are not coordinating with a candidate. If a member of Congress is after the big money that can help them overwhelm a competitor, Krumholz says, it’s not necessarily the party leaders they’re looking to for help anymore.

“Putting aside the fact that the party line that members are supposed to toe has shifted radically in recent years, it is true that both parties have less leverage now,” Krumholz says. “The money they used to give to favored candidates and spend on their own is now worth much less than it was before Citizens United.”

Meanwhile, efforts that GOP leaders have put into creating “safe districts” through gerrymandering has resulted in more and more candidates who, after winning a primary, no longer need to outspend an opponent to an overwhelming degree. Gosar, who was first elected in 2010, is case in point: During an 11-year stretch when the cost of winning a competitive race has ballooned, his campaign always raised far less than the average congressional campaign, an approach he could afford in a deep red gerrymandered district in Arizona. For the 2020 election, when the average House campaign raised $2.6 million, Gosar raised just $622,000. He won in a race that wasn’t even remotely close.

Krumholz says that party leaders might try and use their own affiliated super-PACs for more leverage, such as the Congressional Leadership Fund super-PAC, which has close ties to Republican House leadership. Yet, if it comes to a fight with leadership, Gosar and others who have aligned themselves closely with former president Donald Trump know they have little to fear from the traditional GOP leadership, and in particular the members that control the GOP’s party committees and its donations.

“Gosar also knows that his supporters, fueled by Trump’s attacks on and derision for GOP leadership, will take his side,” Krumholz says. “And if he needs money, he can quickly raise it via small donors from across the country, without party support.”

Gosar’s biggest financial backers during his political career have had no connection with the GOP establishment. Two of his top four sources of funding have been Arizona-based investment businesses: the PACs and executives of the Services Group of America, an Arizona-based investment company, and of Pinnacle West, a utility holding company. Combined, these entities and individuals have contributed more than $145,000 to Gosar’s campaigns. His other two biggest funders have been trade associations affiliated with the dental industry (Gosar is a former dentist), which have contributed more than $136,000.

Gosar’s fifth biggest funder—the closest he gets to relying on his Washington colleagues for financial support—is the House Freedom Fund, a PAC set up by Ohio Republican Rep. Jim Jordan, to support candidates who back his more fiery brand of conservative politics. The House Freedom Fund often backs GOP members who find themselves in direct opposition to the wishes of GOP leadership. The Freedom Fund has given Gosar’s campaigns $30,000 and helped funnel another $26,000 to them from individual donors.

Altogether, the local donors and Jordan’s group have contributed significantly to Gosar’s campaign finances. But ultimately Gosar may not need money to keep his prominent role in the GOP so much as another valuable currency these days: controversial attention.