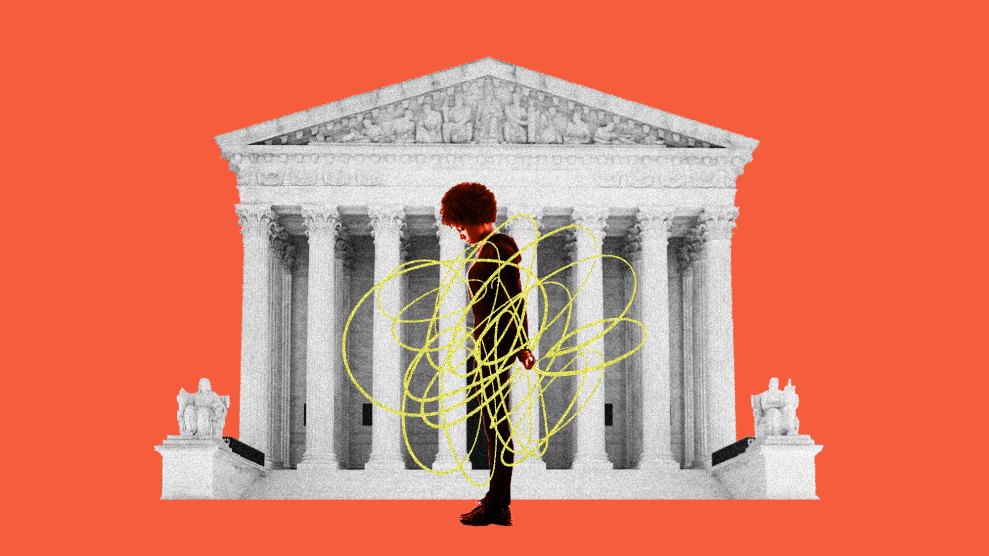 There has long been an expectation that the Supreme Court may try to be a bit subtle as it works to unravel abortion rights—that Chief Justice John Roberts’ concern for his legacy, or the other justices’ fear that the bench may appear to be too “political,” could prevent the outright reversal of the watershed Roe v. Wade precedent.

Today, that illusion was thoroughly shattered.

The Supreme Court heard oral arguments this morning in Dobbs v. Jackson Women’s Health Organization, a case in which the state of Mississippi is seeking to ban abortions after 15 weeks gestation, and the conservative justices were in somewhat rare form—the furthest to the right of them making crystal clear that they do not believe the Constitution protects the right to an abortion.

The mood outside the Court early this morning reflected the coming fracture.

The mood outside the Court early this morning, at a rally organized by the Center for Reproductive Rights, which is representing the plaintiff, reflected the coming fracture. Though abortion advocates have pledged to continue the fight for access to abortion care regardless of the Court’s decision, most activists and clinic staff I’ve spoken with over the past several months are already working to prepare for a post-Roe future. Stephanie Nash, Virginia Advocacy Director for Whole Woman’s Health, was wearing a hoodie with the names of landmark abortion cases listed down the front: Roe, Casey, Whole Woman’s Health, June Medical, Jackson. “Before long, this is going to be a dress,” she said, laughing humorlessly. Anti-abortion protesters were also in the mix; many were jubilant, anticipating their desired outcome, while others were funereal as usual, speaking solemnly of loss of fetal life. One man wiggled his way toward the center of the pro-choice rally, bellowing into a bullhorn about women who were “whores” and should “close their legs,” between expected declarations that abortion is murder. Still, the lines between the two parties in front of the Supreme Court were clearly drawn and enforced with steel barricades.

The fault lines were apparent on the bench, as well.

Their questions and interjections marked a real and significant shift in how explicit they’re willing to be in their disdain for the legal precedent to abortion rights.

Justice Clarence Thomas came in early with an eagerness to test the waters on consideration of fetal personhood—which is not an issue that Dobbs is putting to the Court—specifically probing whether or not child abuse laws could be enforced against pregnant people who use drugs before viability. Justice Amy Coney Barrett was concerned with safe-haven laws, which allow a parent to anonymously surrender an infant without fear of prosecution, suggesting that women can and should carry unwanted pregnancies to term, give birth, and then relinquish the child if they so choose. Justice Brett Kavanaugh repeatedly expressed that he feels the legality of abortion is not one for the Supreme Court at all, but rather for the states, so he can wash his hands of the whole thing and avoid the hypocrisy of declaring that Roe v. Wade is established precedent while also overturning Roe v. Wade. Justice Samuel Alito tried to draw a comparison between Roe and Plessy v. Ferguson, which upheld state segregation and was later overturned in Brown v. Board of Education, on the basis that the prior decision violated the Fourteenth Amendment guaranteeing citizens’ rights to life, liberty, and property. Alito also offered up this tidbit of judicial wisdom: “The fetus has an interest in having a life.” Justice Neil Gorsuch was fairly quiet, but he groped around for a way to frame undue burden, the standard for protecting abortion access that’s been in place since Planned Parenthood v. Casey‘s 1992 decision, as unworkable, and to banish Roe‘s viability standard altogether. Chief Justice Roberts hewed closely to a “what’s the harm in a 15-week limit?” frame, carefully not engaging with issues of personhood.

In summary, the conservatives were saying the quiet part out loud. Their questions and interjections today marked a real and significant shift in how explicit they’re willing to be in their disdain for the legal precedent to abortion rights. Naturally, this does not bode well for the future of people who can become pregnant.

Sort of surprised that Kavanaugh/Barrett not doing more to pretend that they care about people's views on both sides of this issue. This is not shaping up to an opinion that will manage backlash.

More specifically, the conservative justices clearly implied that the Court will side with the state of Mississippi (which, let’s not forget, is not just a question of legal procedure, and would be devastating for pregnant people all across the country). But more than that, today’s queries suggested a much more expansive goal, one that is not as specific as viability or undue burden. By closing arguments, Scott Stewart, the Mississippi solicitor general representing the defense, made clear that the anti’s fight won’t end here, even with a victory on the 15-week law, or a reversal of Roe. “There are interests here on both sides,” he declared. “There are interests for everyone involved. This is unique for the woman. It’s unique for the unborn child too whose life is at stake in all of these decisions.” This is nothing if not an argument for his—and by extension, Mississippi’s—belief in fetal personhood.

Not all the conservative justices seemed game to debate when life begins, but enough did. In addition to Thomas’ apparent interest, Alito literally asked, “Are there secular philosophers and bioethicists who take the position that the rights of personhood begin at conception or at some point other than viability?” This isn’t just an obscure issue of philosophy or semantics. Bodily autonomy is on the line, and it’s not out of the question that this discussion could bleed over to affect what kind of contraception is deemed acceptable, or the outlawing of Plan B (which, despite a slew of right-wing misinformation, is not an abortifacient).

Good reminder that overruling Roe will not put an end to conflicts about abortion. The right-to-life movement is aiming for the recognition of personhoood and the outlawing of every abortion, nationwide. Roe is just the beginning. https://t.co/P1kF0cIoNR

Amid this dystopic madness, Julie Rikelman, the lawyer representing the Center for Reproductive Rights, and Solicitor General Elizabeth Prelogar, acting on behalf of the US Department of Justice, presented their cases clearly and competently and enjoyed some support from the more liberal justices, namely Justice Sonia Sotomayor. “For a state to take control of a woman’s body and demand that she go through pregnancy and childbirth with all the physical risks and life-altering consequences that brings is a fundamental deprivation of her liberty,” Rikelman argued in her opening statements. “Preserving a woman’s right to make this decision until viability protects her liberty while logically balancing the other interests at stake.”

Irin Carmon, senior correspondent at New York Mag, put it best when she tweeted, “Both Prelogar and Rikelman are effective, eloquent and well-prepared and it probably doesn’t matter.” Their careful precision brought to mind that of women like Christine Blasey Ford and Anita Hill, whose testimonies were ultimately shrugged off to preserve the legacies of men who are now sure to destroy abortion rights.

Bodily autonomy is on the line, and it’s not out of the question that this discussion could bleed over to affect what kind of contraception is deemed acceptable.

It’s hard to imagine this future ruling as anything other than devastating. And it’s lending urgency to progressive members of Congress who are hoping to be able to codify Roe v. Wade as federal law and pass the Women’s Health Protection Act. “The Court is being presented with an opportunity to overturn Roe v. Wade, which is exactly what President Trump wanted his Supreme Court nominees to do,” Sen. Mazie Hirono, D-Hawaii, told Mother Jones on Wednesday after arguments concluded at the Court. While “the attacks on a woman’s right to choose and a right to control her own body had been decades in the making,” Hirono said there has been a notable shift over the past several years as anti-abortion political forces have become emboldened in their efforts to challenge constitutional law. (The senator also nodded to Coney Barrett’s emphasis on adoption as an option for pregnant people seeking abortion care. “How nice for a law professor to be able to take that kind of cavalier view,” she said with sarcasm. “She probably is not aware that [women of color] die in far greater numbers than white women in this country, that we have the highest mortality rate of any developed country—she does not have much awareness of those kinds of facts, apparently.”) Unfortunately, that law, of which Hirono is a co-sponsor, is almost certainly going nowhere in this evenly split Senate.

It takes three months on average for the Supreme Court to issue a decision in a scheduled case like this. Meanwhile, we wait not only for that, but also for a decision in the case that was heard a month ago today regarding the constitutionality of Texas’ six-week abortion ban, which is currently in effect. That the Supreme Court justices can sit and debate the freedoms of Americans’ bodily autonomy while continuing to deliberate an even more egregious ban is not just absurd, it’s deeply immoral.