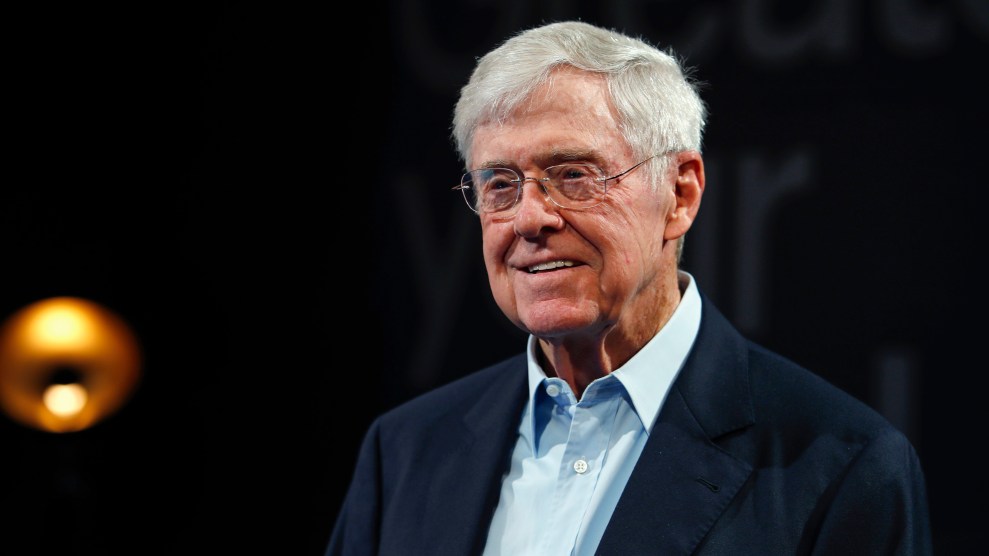 Charles Koch in 2019. Donors Trust, a fund backed by the Kochs, has given more than $600,000 in recent years to the Global Warming Policy Foundation's US arm.David Zalubowski/AP

The Global Warming Policy Foundation, a climate skeptic think tank, has been reported to the Charity Commission by Green Party Member of Parliament Caroline Lucas and Extinction Rebellion.

The move comes after the Guardian revealed that the group received funding from fossil fuel interests.

The think tank has charitable status, but climate campaigners say the questions about its funding mean it should be stripped of this. In a letter to the Charity Commission, the signatories, including the writers Irvine Welsh and Zadie Smith, say the GWPF is “not a charity, but a fossil fuel lobby group.”

The GWPF, set up in 2009 by the former Tory chancellor Lord Lawson, has enjoyed a recent revival in its influence in parliament. It has MP Steve Baker as a trustee and has its research promoted by the Net Zero Scrutiny Group of Conservative MPs.

The letter also claims that the think tank flouts the rules that charities must be run for the public good. The commission states that “a purpose must be beneficial—this must be in a way that is identifiable and capable of being proved by evidence where necessary and which is not based on personal views.”

American Friends of the GWPF received $620,259 from the Donors Trust, funded by prominent oil and gas investors the Koch brothers.

It also says “any detriment or harm that results from the purpose (to people, property or the environment) must not outweigh the benefit—this is also based on evidence and not on personal views.”

The signatories say that the GWPF does not abide by this as it “works against the public need to prepare, mitigate, and adapt to the unfolding climate emergency” and therefore does not serve or benefit society. They argue that the group’s funding could show a conflict of interest, and that it is not working for the public good.

Through its American arm, the group received $210,525 in 2018 and 2020 from the Sarah Scaife Foundation—set up by the billionaire libertarian heir to an oil and banking dynasty. The US-based foundation has $30 million worth of shares in 22 energy companies, including $9 million in ExxonMobil and $5.7 million in Chevron, according to its financial filings.

Between 2016 and 2020, the American Friends of the GWPF received $620,259 from the Donors Trust, which is funded by the Koch brothers, who inherited their father’s oil empire and have spent hundreds of millions of dollars funding the climate denial movement.

The letter concludes: “We look to the Charity Commission’s own guidance that a charity must make sure ‘protecting people from harm is central to its culture.’ We contend that the ongoing global harm caused by climate change is exacerbated by the vested interests that use the GWPF’s undeserved charitable status as a front for their interests.”

A spokesperson for the GWPF declined to comment on the letter to the Charity Commission. The think tank did respond to previous revelations about its funding, saying the companies it receives money from do not count as oil and gas interests, owing to the wealth created from fossil fuels being historic.