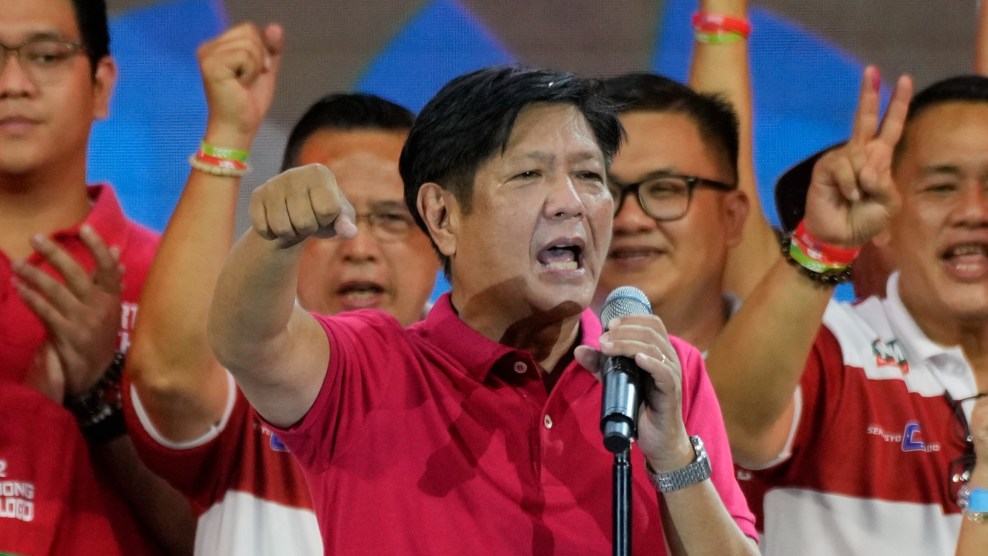 The Philippines is poised to elect Ferdinand Marcos Jr. its next president, elevating the son of a dictator to leader of the country. On Monday, with more than 86 percent of precincts reporting, Marcos Jr., known by the nickname “Bongbong,” and the son of Ferdinand Marcos Sr., who terrorized the country for two decades, had already collected nearly 60 percent of the vote.

Though he held a commanding lead in polls for months, his victory in an apparent landslide will still be a stunning result. In 1986, Filipinos took to the streets in what became known as the People Power Revolution to force his father out of power.

After Marcos Sr.’s ouster and eventual death in exile, his family returned to the Philippines and began a relentless push to reclaim political power. In his ultimately successful campaign, Marcos Jr. adopted a Trumpian playbook to perfection—refusing to debate his rivals, lambasting critical reporting on his family as “fake news,” and using social media to reach a rabid base of supporters directly.

His effort to whitewash his family’s brutality found success among younger voters who either did not know about the various Marcos family controversies or didn’t care. The New York Times, which interviewed voters ahead of the election, found startling examples of collective amnesia:

At a rally in Las Piñas, Ella Mae Alipao, 15, said that she got most of her news about Mr. Marcos from TikTok and Facebook, and that she did not “believe much in books.” After Mr. Marcos’s father was ousted, Ms. Alipao said, “the Filipinos found out how good he was; that’s when they realized that they should have made him president for a longer time.”

“If he is a thief, how come he hasn’t been jailed?” asked Rjay Garcia, a 19-year-old rug salesman, at a recent rally in the city of Santa Rosa. Mr. Garcia said that he believed the cases against Mr. Marcos’s family were meant “to destroy his reputation,” and that he had “never heard” of the People Power protests.

Once Marcos Jr. takes office, Filipinos grappling with their history will face further obstacles. The Marcoses still have not paid off the incredible sum they stole from the government before fleeing. (The family accumulated an estimated $10 billion while in office.) Imelda Marcos is in the process of appealing several convictions for graft while Marcos Jr. is believed to owe nearly $4 billion in unpaid taxes on his father’s estate. The family’s almost-herculean ability to stay out of jail will only continue with another Marcos in power.

It is hard to fathom how Marcos Jr. overcame the stain of his father’s legacy, but as Katharine Ellison, a Pulitzer Prize–winning author of a biography of Imelda Marcos, told me last month, the Marcoses have always been “savvy” with the press. Marcos Sr. and Imelda came into power “right around the time of the Kennedys and they consciously modeled themselves after Camelot.” Decades after their fall from grace, that image has proved more enduring to Filipino voters than the torture victims, stolen funds, and vanity projects left in their wake.