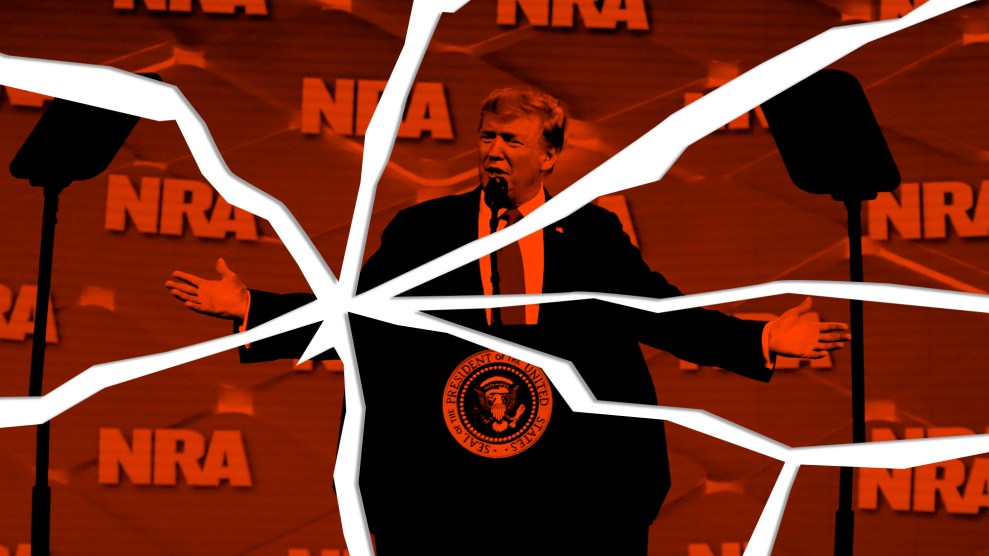 As gun violence ravages communities and the country reels from a string of horrific mass shootings, Americans have been left with an all-too-familiar question: Will our lawmakers finally do something to stop the carnage? We’ve been here before, many times; we’ve watched as Republicans (and some Democrats) bowed to pressure from the National Rifle Association and blocked even the most basic gun control measures.

But as the Trace’s Mike Spies pointed out the day after the Uvalde massacre, there actually has been a seismic shift in the political landscape. The NRA is still a powerful force, but years of scandal and infighting and a failed attempt to declare bankruptcy may have left it substantially weaker than it was in 2013, when pro-gun forces killed a bipartisan background check bill in the wake of the Sandy Hook murders:

The NRA still spends millions on lobbying, but Chris Cox, its legendary chief lobbyist, stepped down in 2019. The group shelled out more than $29 million on the 2020 elections, according to Open Secrets. But that was barely half of what it spent in 2016.

Fear of the NRA is no longer a viable explanation: “At this stage, any decision the GOP makes is its own.”

In short, the nation’s most powerful gun-rights lobby simply has less muscle than it once did to bully Republicans who might otherwise support at least modest gun legislation. Fear, cowardice, and deference to a big-spending political organization—these are no longer sufficient explanations for lawmakers who refuse to act. Already, political media is awash in leaks and speculation about bipartisan negotiations and optimism that just maybe this time will be different—just maybe 10 Republicans will actually vote their conscience. There’s plenty of well-earned cynicism and doubt, too. We’ll see. But as Spies puts it, “At this stage, any decision the GOP makes is its own.”

Spies’ observation actually seems quite relevant to another political powerhouse whose ability to enforce obedience from the Republican Party took a big hit this week: Donald Trump.

It was just two months ago—at a campaign rally for David Perdue—that Trump doubled down on his intention to purge Georgia of every Republican official who had committed a “dereliction of duty” by refusing to help him overturn the 2020 election. “Before we can defeat the Democrat Socialists and Communists,” he said, “we first have to defeat the RINOs, sellouts, and the losers in the primaries.”

That night, Trump railed against Gov. Brian Kemp, the “Republican in name only” whom the defeated president seems to blame more than anyone for thwarting his attempts to cling to power. Trump also blasted Brad Raffensperger, the GOP secretary of state who rejected (and then blew the whistle on) Trump’s request to “find 11,780 votes” so he could prevail in Georgia. And he attacked Chris Carr, Georgia’s Republican attorney general, who had sided with Kemp and Raffensperger in the election dispute. Carr was a “disaster,” Trump said.

When Trump first set out to organize primary challenges against these Republicans, his efforts felt ominous. The disgraced chief executive intended to wield the MAGA movement as a weapon to enshrine the Big Lie as official party dogma and punish any public servant—no matter how far right—who dared to stand up for democracy. It seemed impossible that Kemp and his allies could survive the onslaught, and it was only a matter of time before a combination of primary defeats and political fear would lay the groundwork for Team Trump to steal the 2024 election. There would be no more Republican governors or secretaries of state or local canvassing board members willing to certify Democratic victories.

But then something strange happened. Trump failed in Georgia. Spectacularly.

Kemp easily won his primary Tuesday night, crushing Perdue by more than 50 percentage points. Carr beat election denier John Gordon by a similar margin. Raffensperger—the most endangered of the bunch—managed to eke out a clear majority and avoid a runoff against his Trump-anointed MAGA challenger, Jody Hice. Trump had even endorsed a member of his post-election legal team, Patrick Witt, in a bizarre bid to unseat a Kemp ally as the state’s insurance commissioner. Witt received just 17 percent of the vote.

Those weren’t the only embarrassments Trump suffered Tuesday night. Two of his hand-picked congressional candidates in Georgia—Jake Evans and Vernon Jones—limped into runoffs in their respective primaries. In Alabama, Trump had originally endorsed Rep. Mo Brooks for the state’s open Senate seat. Brooks’ campaign quickly fizzled, and Trump apparently tried to save face by un-endorsing the hard-right congressman, arguing—somewhat absurdly—that Brooks had been insufficiently supportive of his election lies. All this was widely assumed to be a death blow for Brooks’ political future, but it wasn’t. On Tuesday, Brooks finished a distant second place, but that was enough to qualify for a runoff.

“There’s more and more folks that have the confidence to walk out in front of what used to look like a freight train but now is just a matchbox car.”

Trump did have some successes. Republican voters overwhelmingly renominated Ken Paxton, the scandal-plagued Texas attorney general behind one of the most outrageous legal efforts to overturn the 2020 contest. Trump’s choice for lieutenant governor in Georgia, Burt Jones, also secured the GOP nomination. Jones—who was one of the fake electors the Trump campaign infamously tried to send to the Electoral College—is seeking to replace Geoff Duncan, one of the party’s most vocal critics of Trump’s Big Lie.

A year ago, it would have been difficult to imagine Duncan winning a Republican primary, and he chose not to run again. One wonders if he’d make the same decision today. He recently told the Atlanta Journal-Constitution that a lot of Republicans were “vicariously living” through him. “But everyday there’s more and more folks that have the confidence to walk out in front of what used to look like a freight train but now is just a matchbox car,” he said.

The power of the MAGA movement isn’t exactly waning. Kemp, one of America’s most conservative governors, has taken pains to avoid criticizing Trump. “I’m not mad at him,” he told reporters Monday. But Kemp has proven that it’s possible for a Republican to tell Trump no—to refuse his demand to carry out a coup, and to emerge from that fight stronger than ever.