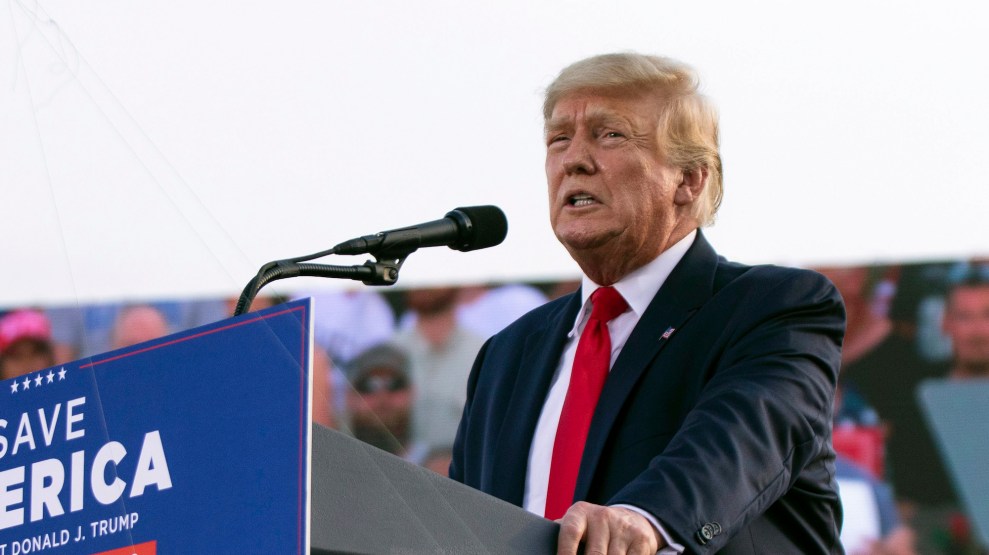 Digital World Acquisition Corp—the publicly-traded company that is planning to merge with Donald Trump’s struggling media business—announced Monday that it had been smacked with a federal grand jury subpoena.

DWAC is special purpose acquisition company (SPAC, for short), which is an empty shell of a corporation that goes public on a stock exchange with no purpose or business plan and then merges with an existing company. It can be a way for a business to get itself publicly listed without having to go through the rigorous and time-consuming process of a traditional initial public offering. Last September, when Trump announced the creation of a media company—including Truth Social, a Twitter look-alike social media platform—he said his new firm would eventually merge with DWAC and go public. In theory, if the merger goes through, it could hugely enrich Trump, who presumably would own a large chunk of the newly merged company, while also providing much needed capital to help his nascent media empire compete with more established tech giants. DWAC, which had already gone public, saw its stock price quickly rise from $10 to more than $97.

But the Securities and Exchange Commission requires a SPAC like DWAC to be a truly blank slate—when the founders of the company go public, they aren’t supposed to harbor secret plans to merge with a a specific business, such as Trump Media & Technology Company. And almost immediately, accusations began to fly that DWAC’s founders did have conversations with Trump’s camp, long before DWAC went public. In December, DWAC executives disclosed in SEC filings that both the SEC and the Financial Industry Regulatory Authority (FINRA) were investigating how much of a relationship existed between DWAC and Trump prior to the SPAC’s launch. Earlier this month, the company said the investigation by the two regulatory authorities was expanding.

Because publicly traded companies have to disclose all sorts of potential problems, the mere fact that some sort of investigation existed was not necessarily significant. But the announcement earlier this month and the new one on Monday suggests that the company may well have a serious problem. According to Monday’s disclosure, the investigation is no longer just a matter for regulatory authorities. Now, a federal grand jury, based out of the Southern District of New York, is asking questions. In other words, the US Department of Justice, has gotten involved.

According to Monday’s filing, the grand jury sent subpoenas to all members of DWAC’s board of directors and to the company itself, asking for essentially the same information already being provided to the SEC and FINRA. The grand jury also requested information specific to an investment firm called Rocket Capital. DWAC’s filing also revealed that Rocket Capital’s chief strategy office, Brian Garelick, resigned from DWAC’s board last week.

DWAC has denied any wrongdoing, and the mere presence of an investigation is far from definitive. But it does seem to be causing major headaches when it comes to the plan to merge with Trump’s media company—and the payday that could result. The two companies were originally slated to merge later this year, but that now appears to be on hold while the investigations continue.

“These subpoenas, and the underlying investigations by the Department of Justice and the SEC, can be expected to delay effectiveness of the Registration Statement,” DWAC’s filing noted, referring to the next step in the merger process, “which could materially delay, materially impede, or prevent the consummation of the Business Combination.”

The initial revelation that the company was under investigation back in December didn’t hurt DWAC’s share price—in fact, it hit its high in March. But it’s been falling steadily in recent months, and on Monday it dropped to around $25 a share. That represents a greatly reduced value for the company—and a big potential hit to its investors.