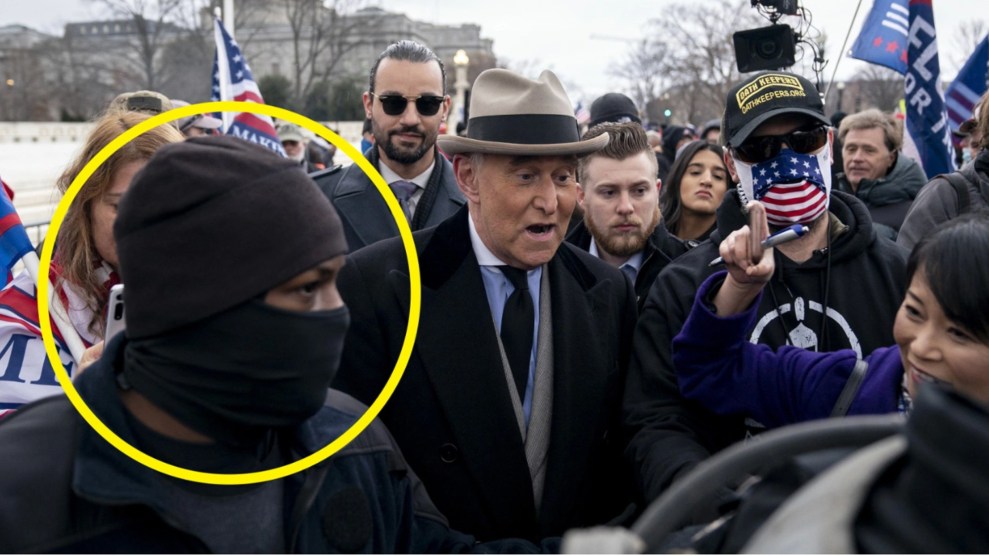 Last Thursday, federal prosecutors charged Michael Greene, a man whom they allege directed members of the far-right Oath Keepers militia on January 6, 2021, with conspiracy. According to a new indictment, Greene told an acquaintance that the mob unleashed by Donald Trump that day in Washington, DC, was “storming” Congress—well before rioters actually entered the Capitol.

Greene, who also goes by Michael Simmons, is an Iraq war veteran who told Mother Jones in an interview last July that he was a military contractor who previously worked for Blackwater, the private security company founded by Trump ally Erik Prince. Beginning in 2017, Greene worked with Oath Keepers’ founder Stewart Rhodes, who designated Greene as the Oath Keepers “operations leader” for January 6. In previous court filings, in which Greene was identified as “Person 10,” prosecutors revealed that he exchanged phone calls with Rhodes and various Oath Keepers who entered the Capitol, and took part in planning sessions in the run-up to January 6.

On Thursday, prosecutors charged Greene with “conspiracy to obstruct an official proceeding” and other crimes. They did not add him to a seditious conspiracy case in which a dozen Oath Keepers, including Rhodes, face charges. Greene and a public defender assigned to represent him did not respond to inquiries from Mother Jones.

In the interview last year, Greene told Mother Jones that his job on January 6 was to oversee Oath Keeper members who were guarding various high-profile Trump allies, including Roger Stone. (Stone who was not at the Capitol on January 6, has denied that he had any foreknowledge of or role in the attack.) Greene claimed he did not tell anyone to enter the Capitol. The Oath Keepers who stormed the Capitol, he said, “did that shit on their own.”

But in the latest court filing, prosecutors allege Greene helped to formulate plans for Oath Keepers “to bring weapons to the [DC area] to support the operation,” and to stash them with a so-called Quick Reaction Force that could enter Washington and fight in support of Trump if violent conflict broke out.

Prosecutors further revealed that Greene knew an attack on the Capitol was underway approximately 30 minutes before rioters entered the building. At 1:42pm, at the crowd outside the Capitol confronted police on the west side of the Capitol grounds; according to the indictment, Greene texted an acquaintance: “Storming the capital,” [sic] along with a picture of the advancing mob.

That was almost an hour before a group of about 14 Oath Keepers, clad in camouflage and tactical gear and using a so-called “stack” formation, entered the Capitol at 2:40pm.

Greene, along with Rhodes, had extensive contact with Oath Keepers in the minutes before they stormed the building, according to the new indictment:

As rioters ransacked the building, Greene narrated the attack in text messages to unidentified recipients. At 3:08 pm, he again texted someone: “Were [sic] storming the Capitol.” He also sent texts that said: “There in,” [sic] and “Fucked up Nancy office”—an apparent reference to rioters who ransacked House Speaker Nancy Pelosi’s office. Around 3:09pm, Greene texted: “Congress evacuated.”

Prosecutors also alleged that Greene deleted records related to January 6 from his cellphone, and charged him with “tampering with documents or proceedings.” He joins a growing list of January 6 offenders who allegedly sought to destroy such evidence.

The newly disclosed details appear to bolster prosecutors’ case that Oath Keepers planned to disrupt the certification of electors on January 6 and followed that plan, coordinating as the attack unfolded. That contradicts the legal defenses of many Oath Keepers who have been charged. Lawyers for several of those defendants have claimed their clients were swept up in the crowd on January 6, or that they supposedly entered the Capitol to try to prevent violence.

Greene self-surrendered to FBI agents on Thursday and made an initial court appearance on Friday in Indiana, where he lives, according to an FBI spokesperson. He “was released pending a virtual hearing set for Thursday, June 30” in federal court in Washington DC, a spokesperson for the US Attorney’s office in DC said. Greene has not yet entered a plea.