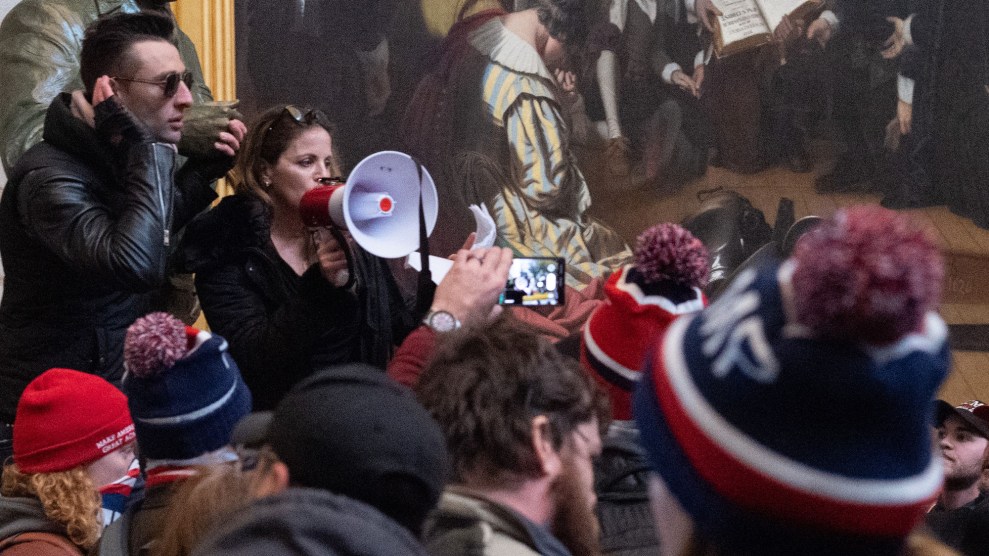 Simone Gold, with John Strand (left), uses a bullhorn to address protesters in the US Capitol on January 6, 2021.Saul Loeb/AFP via Getty

Update, June 16: Simone Gold was sentenced to 60 days in jail.

When Simone Gold was making her meteoric rise in the right-wing ecosphere, she never failed to mention in public appearances that she was both an emergency room doctor and a Stanford-educated lawyer. The credentials made her popular among anti-vaxxers, evangelicals, and others who supported her nonprofit, America’s Frontline Doctors (AFLDS), which she launched in opposition to pandemic lockdowns in 2020. Even after she pushed her way into the US Capitol on January 6, 2021, she yelled in the Rotunda, “I am a Stanford-educated attorney!” before giving speeches to passing rioters complaining about vaccine mandates and urging the use of the anti-malaria drug hydroxychloroquine for Covid treatment. She spent an hour in the Capitol that day, pushing her way to the door of the House chamber as members of Congress fled the violent mob.

In March this year, even as Gold pleaded guilty to a federal misdemeanor for illegally entering a restricted building during the insurrection, she demanded that the judge refer to her as “doctor.” And now, as she awaits sentencing this week, she’s arguing that her elite professional credentials should keep her out of jail. The Justice Department disagrees. A sentencing memo filed by the government in the US District Court for the District of Columbia last week indicates that prosecutors are asking the judge to sentence Gold to 90 days in jail because of, not in spite of, her gold-plated resume. “The Court should reject any contention by Gold that her previous career as a doctor and her legal education are mitigating factors,” prosecutors wrote. “They are not.”

Far from mitigating her crime, they argue, Gold’s professional credentials indicate that of all the people who joined in the mob at the insurrection that day, she should have known better. Not only did she fail to use her medical skills to help a Capitol police officer who had been pushed to the ground by the mob right in front of her as she entered the building, prosecutors write, but:

“Gold, having attended a premier law school, could be expected to have been amply aware that entering the US Capitol with a forceful mob, and rushing past broken windows to do so, was illegal. Gold could be expected to have had an understanding that breaking into the House Chamber on the very day that, under established law, the United States Congress certifies the results of the presidential election, would have particularly harmful consequences for our democracy. Yet Gold joined a mob that attempted to do exactly that.”

In pushing for jail time, prosecutors also argue that Gold doesn’t seem the least bit sorry for her participation in what occurred at the Capitol. “Gold refuses to take responsibility for her crime and, worse yet, she is actively using her crime to tarnish law enforcement, enrich herself, and cause harm through misinformation and vitriol.” The memo goes on to detail Gold’s use of her prosecution for fundraising purposes for AFLDS, which it notes, pays her a staggering $20,000 a month. The group’s website describes Gold’s case as the “political persecution of a law-abiding emergency physician,” and includes a video depicting her bound and gagged as a political prisoner. The website indicates that she’s raised more than $430,000 for legal fees. Prosecutors write in the sentencing memo that “Gold’s public insistence that she is the victim here—despite her deliberate participation in a violent riot—bespeaks a disturbing lack of remorse.”

“Gold’s public insistence that she is the victim here—despite her deliberate participation in a violent riot—bespeaks a disturbing lack of remorse.”

They are doubtful that she possibly could have needed that much money to pay for her defense in a case in which she pleaded guilty as soon as the government offered a deal. “It beggars belief that Gold could have incurred anywhere near $430,000 in costs for her criminal defense: after all, she pleaded guilty—in the face of indisputable, readily identifiable evidence—without filing a single motion,” the memo reports. “Absent a significant sentence imposed by this Court, however, Gold’s criminal conduct will be a windfall for her.”

By contrast, the sentencing memo filed by Gold’s lawyers arguing against jail time naturally highlights her “lifelong service as a physician in some of the most underserved communities in our nation.” It also argues that the government has already significantly traumatized Gold by sending officers to knock down the door of her California home and arrest her “at gunpoint.” The “20 officers and agents with AR-15s (for someone with no criminal history) handcuffed and humiliated her,” the memo says, adding, “The trauma was so bad that Dr. Gold could not stay in her home because each time she saw certain areas of her home where officers had pointed guns at her and handcuffed her, she winced and shuddered at the memory. So she moved.”

The defense memo also reveals that the California state medical board is threatening to revoke Gold’s medical license for “an instance of misinformation,” and that the state of Florida’s Department of Health is also investigating her for “treason.” (The letter from Florida has been filed under seal, so no other details are available in the public court records.) Her lawyers argue that no jail time is needed because, basically, hasn’t she suffered enough?

“This has been a long road for Dr. Gold and her family,” they write. “She is a single mother, and very proud of her two children. She will never get over the day she was arrested and incarcerated. She is now fearful of police. She has repeatedly been threatened on social media cites [sic] and news outlets. Her relationships with many friends and family are strained because of her actions. She lost her job and had to search for another one. Her ability to travel and do her job has been hampered by the fact that TSA put her on a no-fly list even BEFORE she pled guilty…Her personal character and reputation will forever be tarnished.”

And yet, the lawyers write, the quality of Gold’s character is obvious: “Despite all she has been through, the constant harassment by TSA and the inability to fly even before she entered her plea of guilty, she presses on.” They ask the judge to sentence Gold to time served because of her family obligations, including caring for her elderly mother and “raising her two boys.” (The memo fails to mention that both “boys” are now college-age adults.)

On Tuesday, the day after the second congressional hearing on the insurrection, Gold filed a response to the government’s sentencing memo, taking issue with some of the points made by the prosecutors in their sentencing memo. Contrary to assertions by the government about Gold’s invoking her prosecution to help raise money for legal fees, the lawyers insist Gold has paid them with her personal funds and not from her nonprofit group—the one that pays her $20,000 a month from the money she raised by framing her case as a political prosecution. They also object to the way in which the government contextualized Gold’s entrance to the Capitol, insisting that she was in no position to help the fallen Capitol police officer she pushed past to get inside. She was “packed among others at the door,” they argue, and thus, the mob she was in made it “physically impossible” for her to render aid to him.

One of the most peculiar points in the document appears in a footnote, in which Gold’s lawyers complain about the probation officer’s presentencing report for the 56-year-old Gold, which identifies the co-defendant in the case as her “38-year-old boyfriend.” That would be John Strand, an international underwear model whose washboard abs have graced the covers of everything from romance novels to fancy photography magazines. He works for Gold’s nonprofit group as the creative director and accompanied her to the Capitol on January 6. “How is John Strand’s age at all relevant?” the lawyers complain. “This is a personal attack on Dr. Gold’s private life and really uncalled for here.”

Strand, who was indicted along with Gold on multiple criminal charges, is still awaiting trial. But apparently, none of the money Gold has raised for legal fees is going towards his defense. Strand is represented by a court-appointed attorney. He is set to go to trial in July but last week, his lawyer asked for a continuance because he has had significant trouble finding a single expert who could help him wade through the voluminous discovery files and video footage in the case on the budget allotted to court-appointed investigators. (The judge denied the motion.)

Gold’s sentencing hearing will take place Thursday morning, and despite her request to do it virtually, the judge has required her to appear in person in DC, a city the court has banned her from since her arrest last year. Strand’s pretrial release conditions also bar him from entering the District of Columbia, but he has asked the judge to allow him to wait outside the courthouse during Gold’s sentencing hearing to offer moral support—and possibly a ride back to Virginia, where they are staying.