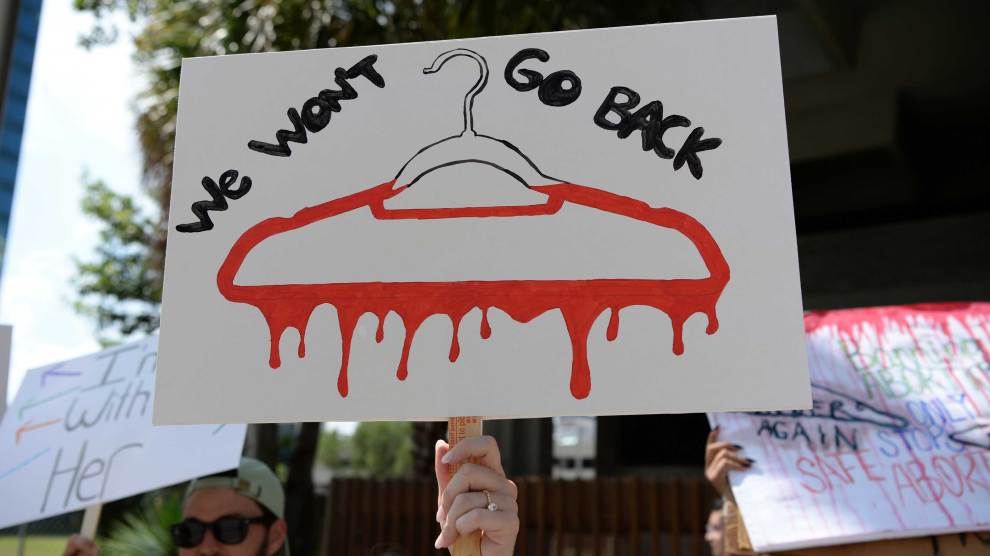 The Bans Off Our Bodies pro abortion rally at the US Federal Court House on July 13, 2022 in Fort Lauderdale, FloridaMediaPunch/AP

It was less than a month ago that the Supreme Court overturned Roe v. Wade. Already, anti-abortion politicians across the country are not only seeking to restrict abortion access but even deny care in situations of life-threatening emergency and unimaginable cruelty. And they aren’t even shy about it.

In just the last week, Republican officials have sued to stop abortions even in medical emergencies, said child rape victims should be forced to give birth, and blocked a bill that would guarantee the right to travel to another state for an abortion. Meanwhile, doctors are denying pregnant people possibly life-saving care. It’s no exaggeration to say that the most dire warnings about the end of Roe are already coming true.

On Thursday, Republicans in Congress blocked a law that would allow pregnant people to travel to another state to obtain a legal abortion—a warning that as some states plan to pass laws limiting interstate travel, Congress may not get in the way. In objecting to the bill, Sen. Steve Daines (R-Mont.) called the bill “radical” and warned about “abortion tourism.” Sen. James Lankford (R-Okla.) also spoke out against it. “There’s a child in this conversation, as well,” Lankford said, referring to an unborn fetus. He accused Democrats of trying “to inflame—to raise the what-ifs.”

Lankford’s word choice was odd given that the country was at that very moment learning that a 10-year-old child, a victim of sexual assault, had been forced to resort to interstate travel to get an abortion. There are indeed children in these conversations, and they are unwillingly pregnant. This child left the state of Ohio and obtained an abortion in Indiana, but the anti-abortion movement argued that she should have been forced to become a mother instead.

Without the protection of Roe, even doctors who perform legal abortions now live in fear of political persecution, violence, and prosecution.

The rightwing lawyer Jim Bopp, who has helped Republicans move quickly to ban abortion, argued that even child rape victims should be forced to give birth. The Ohio abortion ban, according to him, had worked as intended. Meanwhile, the Republican attorney general of Indiana, Todd Rokita, said the doctor who performed the abortion in his state could be prosecuted criminally and falsely alleged that she didn’t properly report the procedure. Fearing harassment and violence, the doctor sent Rokita a cease and desist letter, arguing his threats and false statements form “the basis of an actionable defamation claim.” Without the protection of Roe, even doctors who perform legal abortions now live in fear of political persecution, violence, and prosecution.

It is in this new environment that some hospitals in Texas, with one of the most extreme abortion bans, have stopped providing abortion care in medical emergencies. According to the Texas Medical Association, a hospital in central Texas told a doctor not to treat an ectopic pregnancy—a nonviable pregnancy in which the embryo implants outside the uterus—until it ruptured, which is a life-threatening condition. Two other hospitals told doctors not to treat patients whose water breaks too early and instead send them home to miscarry—which risks deadly infection. In both cases, hospitals are risking serious complications and even death in order to avoid an abortion when there is no possibility that the embryo or fetus will survive. The Texas Medical Association was so alarmed that it reported its findings in a letter to the Texas Medical Board, a state agency, asking them to intervene.

The Biden administration has tried to intervene in such cases, issuing guidance on Monday that federal law requires hospitals to treat patients facing a medical emergency—and threatening hospitals that do not comply with losing federal dollars.

Rather than allow his state’s hospitals to comply, Texas’ attorney general sued. Now, hospitals and doctors are in the lurch, waiting to see whether the courts will protect the right to emergency abortion care or whether states actually have the right to force pregnant people into medically dangerous and even life-threatening situations.

“I didn’t think the abortion ban would affect me.”

Even those who aren’t pregnant are affected. The Department of Health and Human Services is investigating instances of pharmacies refusing to fill prescriptions for chronic illness following the Supreme Court’s ruling. Methotrexate is used to treat rhumatoid arthritis and cancer, and often prescribed to patients with ectopic pregnancies. “I’m a 48-year-old woman without a uterus,” a Tennessee woman whose pharmacy refused her prescription for methotrexate to treat her inflammatory arthritis, told ABC News. “I didn’t think the abortion ban would affect me.” HHS has also reminded pharmacies this week that denying abortion medication puts them afoul of civil rights law.

Despite broad public support for abortion access in some instances, including medical emergencies and when the pregnancy is the result of rape or incest, anti-abortion politicians are taking us to a cruel, criminalized, and medically dangerous place. Unfortunately, it’s only the beginning.