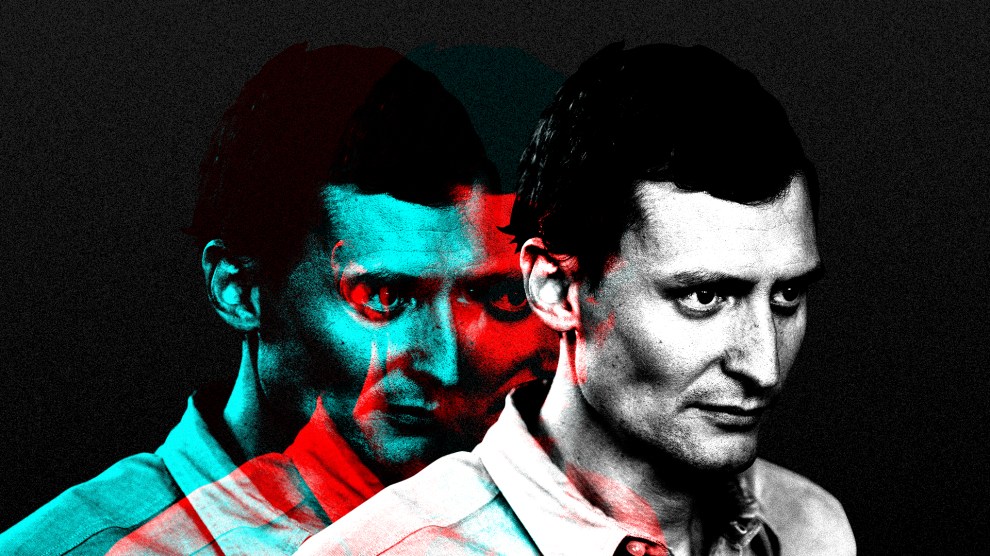 On Monday, Mother Jones published a profile of US Senate candidate Blake Masters, the 35-year-old protégé of PayPal co-founder Peter Thiel. Masters, who rose from being Thiel’s student at Stanford to his chief of staff, is now the frontrunner in the Arizona Republican primary thanks to Donald Trump’s endorsement. If Masters wins the August 2 primary, he will face Mark Kelly, one of the Senate’s most vulnerable Democrats.

Masters is a highly unusual candidate who used to consider himself a libertarian. He supported open borders, backed a woman’s right to choose, and denounced nationalism. A decade later, he is running as an America First ally of Tucker Carlson.

More fundamentally, Masters is the right-hand man of a billionaire who confessed in 2009, “I no longer believe that freedom and democracy are compatible.” Instead of disrupting taxi companies or hotels with his investments, Thiel now has his sights on American democracy. He is spending tens of millions of dollars backing Masters, as well as Ohio Senate candidate JD Vance, another former employee. He is also putting smaller sums behind more than a dozen Republican candidates, most of whom question the results of the 2020 election. His goal is to bend the American right to his will.

The story is based on interviews with more a dozen people who have known Masters over the years (including the best man at his wedding and three former roommates), articles found in the archive of his private high school, emails from Masters obtained by Mother Jones, screenshots from a private chat server used by some of Masters’ biggest donors, and conversations with experts on Thiel’s heterodox worldview and the thinkers that have shaped it. The Masters campaign did not respond to interview or fact-checking requests sent as far back as March 22. Thiel did not respond to requests for comment, either.

Below are six things we uncovered in our investigation. Read the full article with much, much more here.

One of Masters’ own donors now regrets his donation.

As I reported in the piece, a tech worker who donated to Masters campaign now deeply regrets supporting Masters:

“This is the first time where I will regularly wake up and feel just a sense of dread about who it is that I have backed,” the tech worker says.

Screenshots shared with Mother Jones provide a window into how some of Masters’ biggest backers talk about the candidate in private. In June, one donor shared an article headlined, “Blake Masters Blames Gun Violence on ‘Black People, Frankly.’” Using internet slang, he asked approvingly, “How can one man be so [b]ased?” Another user whose avatar was an NFT valued at roughly $100,000 replied, “I love it when a candidate says what we’re all thinking.”

Before calling for overturning Roe v. Wade, Masters criticized the NRA for opposing a woman’s right to choose.

After graduating from Stanford in 2008, Masters wrote to a listserv used by members of Columbae, the left-wing, vegetarian co-op he belonged during his college years. “When will someone start a group that’s pro-gun (pro-freedom) AND pro-choice (pro-freedom)?” Masters wrote in opposition to the NRA. “I would join.”

The Masters campaign declined to say when Masters stopped being pro-choice.

As a senior at Stanford, Masters rapped while wearing what was meant to resemble Native American war paint.

Masters recorded the video for a talent show organized by the Columbae co-op. Masters took aim at political correctness. “I’ve got the war paint on, as you can see,” he rapped. “Who said what about cultural insensitivity?”

A decade ago, Masters was recommending the writing of a self-identified “absolute monarchist” whose work he has now quoted on the campaign trail

In 2012, according to an email shared with Mother Jones, Masters suggested that a former college roommate read a series of essays by Curtis Yarvin, who describes himself as America’s foremost absolute monarchist blogger, that called for replacing democracy with a monarchy headed by a CEO. The roommate had asked for ideas for a book club focused on issues like sustainability and overconsumption, but Masters thought that was a distraction from deeper problems like the “sustainability of sovereignty” and government spending.

A decade later, Masters talked up Yarvin’s plan to “RAGE,” or Retire All Government Employees, on the campaign trail. Yarvin recently gave Masters his first campaign contribution on record: the legal maximum of $5,800.

Some of Masters’ childhood best friends have been disgusted by his rhetoric.

Noah Gustafson, one of his best friends from high school, has been struck by Masters’ total lack of empathy. “It makes me ache when I see what he writes and says,” he said. “It puts me in a state of depression.”

“I don’t know what’s worse,” said Collin Wedel, the best man at his wedding, “if he actually is aware that he’s selling snake oil to people, or if he truly believes” what he’s saying.

In November, Masters shared a private tweet Wedel sent criticizing him. As a result, Wedel received harassing calls and had to call the police after threatening materials were placed in his mailbox. The two have not spoken since.