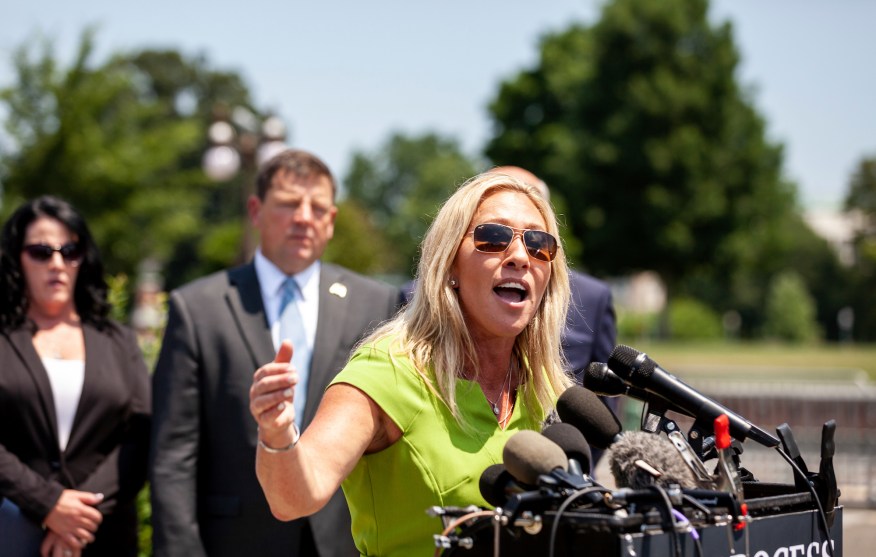 Photo by Allison Bailey/NurPhoto via AP

Far-right provocateur Rep. Marjorie Taylor Greene (R-Ga.) managed to survive a legal challenge to her re-election bid earlier this year, but the cost was high—literally. According to the Greene campaign’s most recent filing with the Federal Election Commission, she spent more than $300,000 on legal fees over the last few months. The lion’s share of that money went to the law firm of Jim Bopp, a high-profile anti-abortion attorney who on Thursday caused a firestorm by reportedly suggesting that a 10-year old rape victim who travelled to Indiana for an abortion should have instead given birth.

Greene’s campaign is a money-making machine, routinely raising north of $1 million per quarter. But it also churns much of that money back into fundraising—renting email lists and hiring vendors to send out hundreds of thousands of emails, phone calls, and mailers. In the past, her largest campaign expenses were almost always marketing fees and list rental. But this quarter, for the first time ever, legal fees topped her disbursements—coming in at a whopping $304,000. Bopp collected at least $202,000 of that, with several other law firms and consultants receiving the balance.

Bopp represented Greene in a legal battle earlier this year over an effort to remove her from the ballot in the aftermath of the January 6 attack. A group of voters argued that Greene had “aided and engaged in an insurrection to obstruct the peaceful transfer of presidential power” and was therefore constitutionally barred from holding office. Greene eventually prevailed, (or as she put it, despite not facing criminal charges, was “ACQUITTED“) but it took four days of dramatic hearings, during which Greene testified to having a very thin recollection of the surrounding events. (At one point, Bopp objected to a video published by Mother Jones that the plaintiffs introduced into evidence.)

Bopp is a well-known conservative lawyer who is considered one of the key architects of the Citizens United decision that unleashed super-PACs and dark money on American politics.

More recently, Bopp has been in the news for his role in helping conservatives move quickly to outlaw abortion in the wake of the Supreme Court’s recent decision overturning Roe v. Wade. He wrote a piece of model legislation that would prohibit any abortion unless it was required to save the mother’s life. After news outlets reported on the 10-year old rape victim traveling to Bopp’s home state of Indiana to terminate her pregnancy, Bopp told Politico that his preferred version of that abortion ban does not contain exceptions for rape and incest.

“She would have had the baby, and as many women who have had babies as a result of rape, we would hope that she would understand the reason and ultimately the benefit of having the child,” Bopp told Politico on Thursday. Bopp’s statements immediately caused a political backlash.

In an email Friday, Bopp told Mother Jones that his words had been “taken grossly out of context.” He added that “an exception for rape and incest is a pro-life position.”

As the Politico story noted, Bopp’s model legislation does say in a footnote that it “may be necessary in certain states” to include rape and incest exceptions. But that is clearly not his preferred outcome.

In its introduction, Bopp’s bill declares: “We recommend prohibiting abortion except to prevent the death of the pregnant woman, which has been the accepted policy choice by the pro-life movement since 1973 and for many years before.”