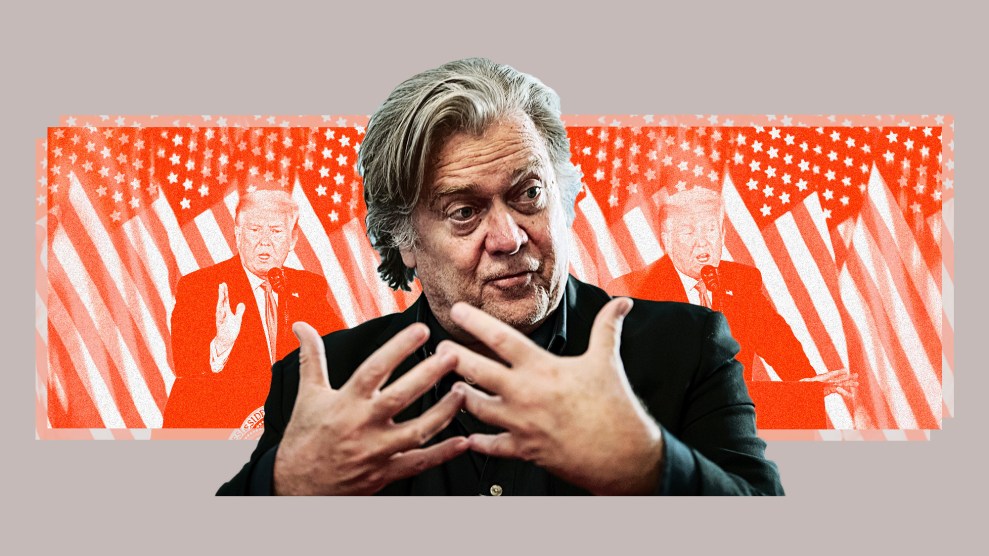 On the evening of October 31, 2020, Steve Bannon told a group of associates that President Donald Trump had a plan to declare victory on election night—even if he was losing. Trump knew that the slow counting of Democratic-leaning mail-in ballots meant the returns would show early leads for him in key states. His “strategy” was to use this fact to assert that he had won, while claiming that the inevitable shifts in vote totals toward Joe Biden must be the result of fraud, Bannon explained.

“As it sits here today,” Bannon said later in the conversation, describing a scenario in which Trump held an early lead in key swing states, “at 10 or 11 o’clock Trump’s gonna walk in the Oval, tweet out, ‘I’m the winner. Game over. Suck on that.'”

Trump’s plan to falsely declare victory while tens of millions of votes were still being counted was public knowledge even before the election. Axios reported on the scheme at the time. Bannon himself discussed the idea on November 3—Election Day—on his War Room podcast. Weeks earlier, Bannon had interviewed a former Trump administration official who outlined how Trump would use allegations of fraud to dispute an electoral defeat and would seek to have Congress declare him the winner. Last month, the congressional committee investigating January 6 detailed how Rudy Giuliani convinced Trump to go ahead with a victory declaration after 2 a.m. on November 4, over the objections of campaign staff. “Frankly, we did win this election,” Trump insisted in that infamous news conference.

The nearly hourlong audio obtained by Mother Jones is new evidence that Trump’s late-night diatribe—which came a few hours later than Bannon had anticipated—followed a preexisting plan to lie to Americans about the election results in a bid to hold onto power. The new recording stands out for the striking candor and detail with which Bannon described a scheme to use lies to subvert democracy. Bannon also predicted that Trump’s false declaration of victory would lead to widespread political violence, along with “crazy” efforts by Trump to stay in office. Bannon and his associates laughed about those scenarios at various points in the recording.

In a comment sent Wednesday, a Bannon spokesperson argued that Bannon’s statements on the recording are not news. “Nothing on the recording wasn’t already said on War Room or on multiple other shows like The Circus on Showtime,” the spokesperson said. “Bannon gave that lecture multiple times from August to November to counter Mar[c] Elias’ Election Integrity Project.” Elias is a prominent Democratic election lawyer. The spokesperson also said that the January 6 committee “should have the courage to have Mr. Bannon come and testify publicly about these events.”

After Election Day, Bannon became a prominent booster of Trump’s bogus election fraud claims. The Washington Post reported Monday that Bannon’s “vociferous support” for those lies helped convince Trump to grant him a last-minute pardon on unrelated fraud charges. Speaking to Mother Jones, Bannon’s attorney, Robert Costello, questioned that reporting. He said that as far as he knew, “Trump never made any” statement linking the pardon to Bannon’s election rhetoric.

Bannon refused last year to cooperate with a January 6 committee subpoena. The Justice Department later charged him with two counts of contempt of Congress. This weekend, he claimed that he now wishes to testify before the committee. But federal prosecutors argued this about face was “irrelevant” to the charges that Bannon had already broken the law. A judge ruled Monday that the trial would go forward next week.

“Trump’s gonna be sitting there mocking, tweeting shit out: ‘You lose. I’m the winner. I’m the king.'”

The pre-election audio comes from a meeting between Bannon and a half dozen supporters of Guo Wengui, an exiled Chinese mogul for whom Bannon has worked. Bannon helped Guo launch a series of pro-Trump Chinese-language news websites that have promoted an array of far-right misinformation, including a video streaming site called GTV. The meeting was intended to help GTV plan its election night coverage.

Though he did not attend, Guo arranged the confab, which was held in the Washington, DC, townhouse where Bannon tapes War Room, according to a person who was present. That source recorded the meeting and recently provided the audio to Mother Jones. The attendees included Dr. Li Meng Yan, a virologist who had made unsubstantiated claims that Covid was designed by China as a bioweapon—claims that Bannon had helped to propagate. Also there was Wang Dinggang, a GTV host who had helped to spread false claims about Hunter Biden.

Speaking to this group of mostly Chinese immigrants, Bannon explained US electoral processes—and Trump’s plans to exploit them—in some detail. He emphasized that in 2020, Republicans were more likely to vote in person, casting ballots that, in many states, would be counted first. Democrats disproportionately voted by mail. Their ballots would take days to tally in a number of states. That meant that when it came to public perceptions about who was winning, Democrats would “have a natural disadvantage,” Bannon said. “And Trump’s going to take advantage of it. That’s our strategy. He’s gonna declare himself a winner.”

“So when you wake up Wednesday morning, it’s going to be a firestorm,” Bannon continued. “You’re going to have antifa, crazy. The media, crazy. The courts are crazy. And Trump’s gonna be sitting there mocking, tweeting shit out: ‘You lose. I’m the winner. I’m the king.'”

It’s not clear how much influence Bannon, who had previously been Trump’s top White House strategist before being ousted, really wielded over Trump at this time. But Bannon has suggested that he was a key architect of Trump’s efforts to overturn the election results and has reportedly asserted that he convinced Trump to make January 6 a moment of reckoning in that bid. Bannon was also among the Trump associates who gathered in a set of rooms and suites in the Willard Hotel on January 6 to advise on the president’s attempt to remain in power.

Bannon’s remarks to Guo’s supporters indicate that he was working with a group, led by Giuliani, that wanted Trump to take particularly aggressive steps to contest unfavorable election results. Other advisers have said they opposed these steps. Bannon said during the October 31 meeting that he was collaborating closely with Giuliani, who was preparing to oversee Trump’s planned legal efforts.

Bannon’s meeting with Guo’s associates occurred a few weeks after Bannon, working with Giuliani, had provided the contents of Hunter Biden’s laptop to the New York Post. Bannon acknowledged in the recording that he had also helped supply Guo supporters with this material. As Mother Jones has reported, Guo then directed his backers to put sex videos and other salacious content from the laptop online. Bannon praised Guo’s effort during the meeting, saying it had helped slow Biden’s momentum. That left Biden with little prospect of a resounding election night victory that Trump wouldn’t easily be able to contest, Bannon added.

As a result, any chance for a “peaceful resolution of this is probably gone,” Bannon said. “Because the other three alternatives [are], either Biden’s up slightly and Trump says he stole it, right, and he’s not leaving. Or it’s undefined and we can’t figure out who’s leading, and Trump’s saying he’s stealing it, and he’s not leaving. Or, Trump’s leading, which is the one where they’re gonna burn the city down.”

Bannon expressed the belief that Trump actually winning would lead to violence by the left. But he also said that Trump falsely claiming he’d won—a strategy Bannon was cheering on—would probably cause violence too. And Bannon emphasized that election night would mark the start of a battle for power in which Trump would try to stop the votes of people who opposed him from being counted, while Democrats would try to use invalid ballots to defeat him. Democrats, Bannon claimed, “steal elections all the time.”

Election Day 2020 would not be like others, Bannon said. “This is a revolution,” he explained. “This election just triggers more fighting.”

Bannon also said during this meeting that once the voting was done, Trump would be unencumbered by electoral pressure. “Here’s the thing. After then, Trump never has to go to a voter again,” Bannon said. “He’s gonna fire [Christopher] Wray, the FBI director…He’s gonna say ‘Fuck you. How about that?’ Because…he’s done his last election. Oh, he’s going to be off the chain—he’s gonna be crazy.”

“If Trump is losing by 10 or 11 o’clock at night, it’s going to be even crazier. No, because he’s gonna sit right there and say, ‘They stole it. I’m directing the attorney general to shut down all ballot places in all 50 states,'” Bannon said. “He’s not going out easy. If Biden is winning, Trump is going to do some crazy shit.”

Update, July 13: This story has been updated to include a statement provided by a Bannon spokesperson after publication.