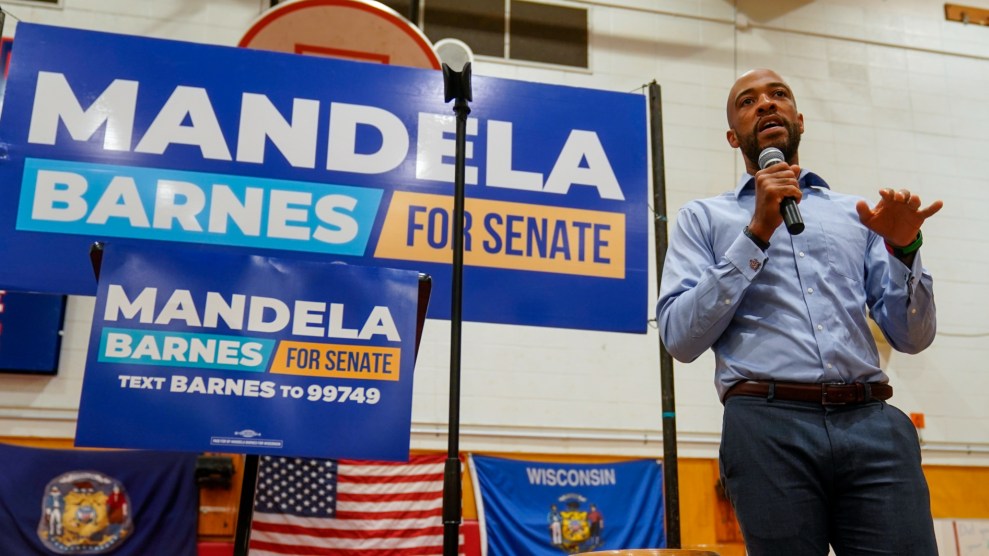 Update, July 29, 2022: On Friday, State Treasurer Sarah Godlewski dropped out of the race to be the Democratic nominee for this year’s Senate race in Wisconsin. She endorsed Lieutenant Governor Mandela Barnes, clearing his path for nomination and setting up a battle with Senator Ron Johnson.

It’s looking all but certain that Wisconsin Lieutenant Governor Mandela Barnes will be the Democratic opponent to take on the much-maligned Wisconsin Senator Ron Johnson in November. This week, two of Barnes’ main rivals dropped out ahead of the August 9th primary, clearing the path for the 35-year-old Milwaukee native. Barnes has already secured the endorsement of Senator Bernie Sanders and campaigned last weekend alongside Senator Elizabeth Warren. The race between Barnes and Johnson will be among a few set to determine which party controls the Senate.

Barnes has been a rising star in Wisconsin politics for the last decade. He was elected as a State Representative in 2012 and then joined Governor Tony Evers’ campaign to oust Scott Walker in 2018, becoming Lieutenant Governor at 31. He is only the second Black elected official in statewide office in Wisconsin’s history. During the campaign Barnes has drawn on his working class upbringing in a strong union household. He grew up on the north side of the starkly segregated Milwaukee, “in one of the most impoverished and incarcerated Zip codes in the state,” according to his website.

His first ad was a wholesome message to the state well-known for its dairy industry simply titled “Milk.” As Barnes pushes a shopping cart through a grocery store, he explains that, like average Wisconsinites and unlike his unnamed millionaire opponents, he feels the same squeeze they do when the price of a gallon of milk or pound of beef goes up. “I know how hard you work,” says Barnes.

His campaign hopes that message will be a stark contrast to Ron Johnson, one of the richest Senators who recently complained that his political career hadn’t made him more money personally. (His wealth has doubled in the ten years he’s been in office).

Johnson, who ousted beloved progressive Senator Russ Feingold in the Tea Party wave of 2010 (and defeated Feingold in a rematch in 2016), is the son-in-law of Howard Curler, a billionaire who helped Johnson out by giving him a make-work job at a plastics company and then serving as the company’s only customer.

Johnson has also come under fire after it was revealed that on the morning of January 6, his chief of staff texted an aide of former Vice President Mike Pence and offered to provide alternate electors that would vote for Donald Trump, even though Joe Biden won Wisconsin. (Johnson has denied any involvement in the attempted coup.)

The Barnes campaign has struck an interesting balance between the rival wings of the Democratic party. He’s endorsed by progressives like Sanders, Warren, Congressman Ro Khanna, and Congresswoman Alexandria Ocasio-Cortez (though Barnes doesn’t list her support on his website). And also by Congressman Eric Swalwell and House Whip Jim Clyburn, the latter who famously helped end Sanders’ 2020 presidential campaign when he issued his crucial endorsement of Joe Biden before the South Carolina primary.

On Monday, Barnes’ opponent to his left, Tom Nelson, the Executive of Outagamie County and a former delegate for Bernie Sanders 2020 presidential run, announced he was suspending his campaign and endorsed Barnes in a video posted on Twitter.

“I’m proud to say that the progressive vote is consolidated, and the progressive family is one,” said Nelson. He later added in a press release: “Unlike billionaire son-in-law Ron Johnson and some of the other Democratic candidates, Mandela Barnes knows firsthand what it’s like for families struggling with inflation, without health insurance or a lack of gainful work. He has a strong progressive record and is well positioned to finish Ron Johnson off.”

In a late June poll from Marquette University law school, Nelson had topped out at 7%, but as John Nichols of the Nation wrote earlier this week, his support will be important in rallying, “a small but ardent base of young labor-aligned progressives and climate activists.”

One of the “other Democratic candidates” Nelson was referring to was Alex Lasry, an executive for the Milwaukee Bucks and the son of their co-owner who had self funded his campaign and had been polling closely behind Barnes for months. Yesterday, Lasry also announced he would be suspending his campaign and endorsing Barnes. In an exclusive interview, he told Politico: “I firmly believe that if there was no path to victory, the best thing to do is to make sure that we can as early as possible rally around a nominee so that we can spend every second that we have making sure that we’re working toward that goal.”

All that’s left between Barnes and the nomination is the State Treasurer Sarah Godlewski. As of late June, she was still polling in the single digits, but her campaign has said that she’s been “surging,” and recently boasted that she was the only candidate pulling ahead of Johnson in prospective polls. Barnes, on the other hand, released an internal poll yesterday showing him at 39 percent, Lasry at 25 percent and Godlewski at 12 percent.

With Nelson and Lasry’s endorsements, it looks like close to a sure bet that Mandela Barnes will face Ron Johnson in November, giving Wisconsin voters as clear of a contrast of candidates and priorities as any race in the nation.

Correction, August 2: State Treasurer Sarah Godlewski’s name was incorrect in an earlier version of this article.