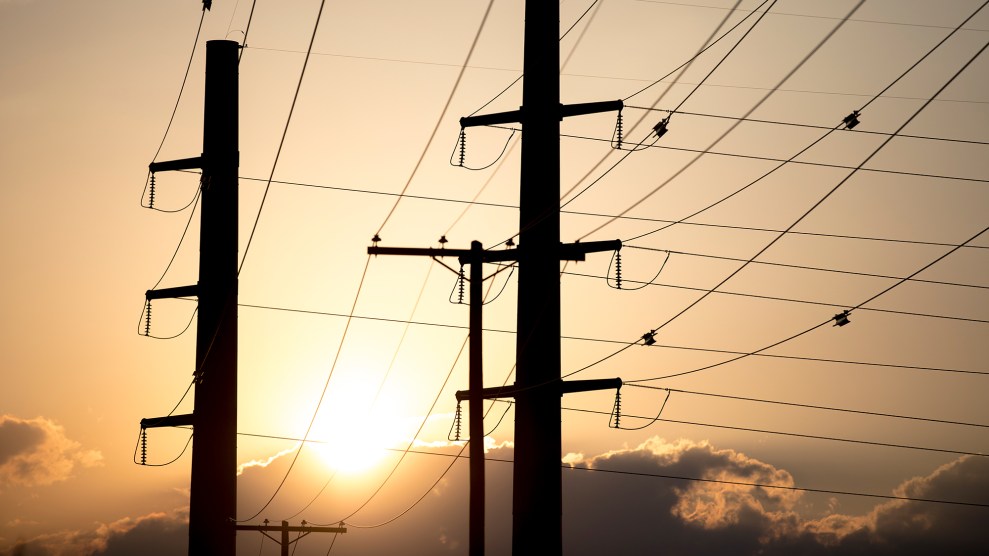 The sun sets behind transmission lines in Texas on July 11.Nick Wagner/Xinhua via ZUMA Wire

Once again, Texas’ ability to keep electricity flowing to its nearly 30 million residents is in doubt: Searing heat waves, and the heightened energy use they’re spurring, are stressing the state’s grid to a nearly calamitous degree. On Sunday—the second-hottest July day recorded in the state since 1950—the Electric Reliability Council of Texas, which oversees the state’s power capacity, asked Texans to voluntarily cut back on their electricity use during peak demand hours on Monday. The ask: turn up thermostats, avoid using appliances like dishwashers and laundry machines, and delay electricity use in general, even as temperatures in some areas rise to 110 degrees Fahrenheit. The Texas Department of State Health Services also sent out tips to stave off heat-related illness, noting that “Everything’s hotter in Texas.”

Many Texans are still scarred by the winter 2021 storm-caused blackouts, which cut off power to millions and led to hundreds of deaths. (The phrase “PTSD” became a local trend on Twitter earlier this year, during the anniversary of the tragedy.) And so they’ve greeted the latest grid stress with some fatalism, often with good cause. The same day ERCOT announced its latest request, with reassurances that mass outages wouldn’t reoccur, thousands of Travis County residents lost power thanks to private-utility damage from thunderstorms. One Texan told Fox Business, “We’ve seen [the grid] go down before for heat as well as cold. And as it’s warmer now, I don’t see it getting any better.”

Thankfully, the worst-case scenario did not come to pass on Monday (even though some Texans “reported sporadic brownouts throughout the state,” according to the Washington Post). State power demand, which had reached a record high last week most likely because of full-blast air conditioners, appeared to lower on Monday and reduce pressure on the grid. Power-sucking, industrial-scale Bitcoin miners who’d set up operations within the state over the past year have shut down their rigs until the heat wave passes, freeing up at least 1 percent of state grid capacity, according to the Texas Blockchain Association. Cities like San Antonio took energy-conservation measures at the municipal level. And ERCOT reported, with some relief, that Texans had indeed voluntarily slowed down their power use, altogether saving up to 500 megawatts (an amount that, on its own, is sufficient to fully power 100,000 homes).

While it’s certainly not unreasonable to ask citizens to forgo certain activities for the public good, some wondered whether life-or-death decisions involving electricity reliability should fall on Texans every time there’s a weather threat, no matter what kind. US Rep. Eddie Bernice Johnson called it “outrageous and inexcusable” that Texans were being told their power supply could handle neither extreme cold nor extreme heat. Beto O’Rourke, who is challenging Gov. Greg Abbott, tweeted: “We can’t rely on the grid when it’s hot. We can’t rely on the grid when it’s cold. We can’t rely on Greg Abbott.”

For his part, Texas’ governor hasn’t seemed too perturbed, even as heat waves continue across the Lone Star State. Back in February, in the midst of uniquely icy storms, Abbott publicly praised his administration’s electricity operations, stating that “The Texas electric grid is the most reliable and resilient it’s ever been.” That comment was thrown back at him this Monday, when a local ABC affiliate asked Abbott whether these requests to “voluntarily conserve” energy still meant that the state was prepared—or not—for a “potentially hotter August.”

“If you look at the way the grid has performed so far, it’s performed remarkably well,” the governor responded. “The laws that we passed in the last session gave ERCOT the flexibility they needed. … We will be able to make it through the summer.” He further added that since 2021’s catastrophic winter storms, “no Texan has lost power as a result of any problem with ERCOT” thanks to said grid reforms.

Unfortunately, this week wasn’t the only close call—and it’s far from clear that Texas’ grid has been “fixed.”

Early last year, the Texas Legislature took up Abbot’s calls for “ERCOT reform,” which he deemed an emergency-level priority. Much of the state grid’s vulnerability was long baked in, after all: Texas’ power operates independently of the rest of the country and top-down federal regulations, the natural gas lines feeding into the grid were not bolstered to handle extreme weather (nor were the nuclear plants or wind farms), issues with suitable energy transmission weren’t discovered until after the blackouts, and sources of backup power generation were lacking.

Though plenty of legislation had been introduced in the Texas House by March 2021, only two of the bills were signed into law by June. Senate Bill 2 gave the Texas government more control over ERCOT’s makeup and governance, following the firings and resignations of several officials involved in the 2021 crisis; Senate Bill 3 was more involved, including a proposed overhaul of emergency alert systems, a requirement for state regulators to review the availability of energy reserves, and orders for power generators as well as transmission lines to bolster their weather resiliency.

Abbott declared that “everything that needed to be done was done to fix the power grid in Texas.” Not everyone agreed.

After signing the bills, Abbott claimed they “fixed all of the flaws” with the grid and that “everything that needed to be done was done to fix the power grid in Texas.” Not everyone agreed with this: Critics noted at the time that the measures, which would take years to fulfill, didn’t go far enough in incentivizing electricity generators to fix their issues, or in compensating residents who lost loved ones or money during the winter crisis. Plus, enforcement of these laws was passed on to industry-friendly regulators that likely wouldn’t crack down hard on natural gas companies (which are not overseen by ERCOT). Almost as if to drive the faults home, just a week following the bills’ passage, ERCOT called on Texans to check their electricity consumption to avoid potential blackouts, after 12,000 megawatts of power were knocked offline for unknown reasons. By November, ERCOT had released a report claiming that the grid likely wouldn’t be able to withstand another serious disaster.

Still, energy operators kept touting their changes. In December, the Texas Public Utility Commission—which oversees ERCOT—guaranteed residents that they would not lose power in the event of another severe winter event, citing inspections of generators and transmission operations, proposed fines on power providers that didn’t weatherize their systems, and assurances from the state Railroad Commission that gas lines would become sturdier. And around this time, Abbott personally met with cryptocurrency miners to encourage them to consume even more power for their virtual-finance farms—so that they could drive up energy demand and fuel the construction of more backup power plants within the state, even though Texas was already set to see record demand throughout 2022. For Abbott, this was a chance to help Texas “get through the winter” and its subsequent energy travails, per Bloomberg—even though in November, he’d informed a local TV station that he could already “guarantee the lights will stay on.”

Such promises were quickly put to the test. In January of this year, snowy weather shut down 12 percent of the state’s natural gas lines, but the electric grid held on. Afterward, ERCOT moved to pay extra money to keep more backup power online for more of the year. But by February, Abbott was already doubling back, stating that “no one can guarantee” there wouldn’t be another series of power outages. Winter may have gone by without another large-scale power tragedy, but the summer hit hard: May saw another call from ERCOT for domestic power conservation after six power plants unexpectedly quit, and June saw a new record in statewide electricity use. However, the Dallas Morning News reported, solar and wind capacity helped to keep up with this surge, providing one-third of the power Texans were then relying on, and demand was further reduced as Bitcoin farms powered down.

For the time being, it does appear as though ERCOT has been more cautious and preemptively alert to weather-induced electricity issues as well as needed backup reserves, while now actually notifying Texans of emergencies unlike last time; plus, both Bitcoiners and households have been ready to reduce consumption when told to. As of this week, the worst appears to have been averted again. This may not be too reassuring, however. After all, blistering heat will keep warming Texas all summer, likely leading to more records in power demand plus additional climate-linked disasters like wildfires.

Electric power in Texas is getting more expensive thanks both to worldwide energy inflation and heightened costs from long-overdue grid fixes. Meanwhile, further solutions like improved home insulation, out-of-state electricity backup, governmental accountability from gas and electric providers, and manufacturing of more energy-efficient home appliances aren’t anywhere in sight. There’s still a long, hot summer ahead—and a sure-to-be freezing winter after that. Hopefully the lights will really stay on.

This story is part of Future Tense, a partnership of Slate, New America, and Arizona State University that examines emerging technologies, public policy, and society.