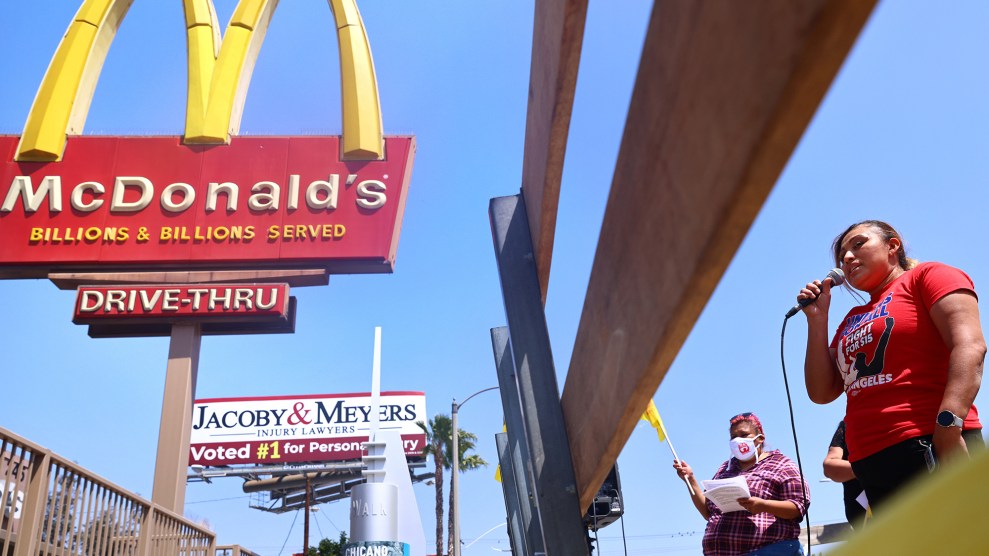 McDonald’s employee Nidia Torres (right) speaks at a rally of fast-food workers and supporters for passage of AB 257, a fast-food worker health and safety bill, on April 16, 2021, in Los Angeles.Mario Tama/Getty

Mysheka Ronquillo usually gets up around 6 in the morning to provide in-home care to two clients in Los Angeles. In the afternoon, Ronquillo then doubles back south to her second job at a Carl’s Jr. in Long Beach. After what can be an hours-long trek on public transit, her managers at the fast-food chain sometimes send her home without pay because there’s not enough work to do.

“They look at us like we’re just a number,” Ronquillo says. “We don’t have feelings. We’re not human. We don’t have children and bills.” The indignities of being one of California’s more than 500,000 fast-food workers have led her to organize in support of a new bill that would establish a statewide council tasked with setting minimum conditions and wages for the industry. The legislation has the potential to serve as a model for states seeking to help a wide range of workers at a time when labor law reform is stalled in Congress.

AB 257—the Fast Food Accountability and Standards Recovery Act—passed the California Assembly in January. The state Senate’s appropriations committee backed the legislation last week by a 5-2 margin, and supporters are cautiously optimistic that it will soon pass the full senate.

“This would be the biggest thing we can do right now in the state to stand up for the working class,” says Rep. Ro Khanna (D-Calif.), “and the Democratic Party has to clearly be on the side of the working class.”

What’s unclear is whether Gov. Gavin Newsom, who has remained neutral despite pressure from labor groups and progressive legislators, would sign it. The governor is setting himself up as a potential presidential contender, and any position he takes would signal the kind of campaign he hopes to run. (Newsom’s press office did not respond to a request for comment; a spokesperson told Vox that the “governor will evaluate the bill on its own merits if it reaches his desk.”)

Rep. Ro Khanna, who represents Silicon Valley in Washington and may harbor presidential ambitions of his own, considers the bill his highest priority in California. “This would be the biggest thing we can do right now in the state to stand up for the working class,” Khanna told me, “and the Democratic Party has to clearly be on the side of the working class.” He frames the legislation as a basic matter of providing dignity in the workplace.

AB 257 resembles what is known as “sectoral bargaining,” a process by which workers negotiate collective bargaining agreements that apply to entire industries. The practice has been used to great effect in countries like Germany and Denmark, but it is not permitted under American labor law. Instead, workers here must negotiate contracts that cover individual companies, or parts of companies such as an individual store or warehouse.

The California bill would establish a 13-person council composed of fast-food workers and their advocates, industry representatives, and state officials. Together, they would be responsible for determining minimum wages, along with hours and working conditions, across California’s fast-food industry.

The bill would give fast-food workers far more power than they have today in California, or any other state.

The council’s power would be limited by the fact its decisions would have to be backed by the California Secretary of Labor and Workforce Development. The state legislature would also have the power to reject or amend any of the council’s proposals. Still, the bill would give fast-food workers far more power than they have today in California, or any other state.

Another key section would make franchisors like McDonald’s have joint liability. That is a major shift from current law, which generally allows franchisors to avoid being held responsible for conditions at individual locations. In doing so, the bill would force major fast-food companies to pay more attention to how their business model—and its emphasis on keeping costs as low as possible—impacts workers.

In a 2016 law review article, Columbia law professor Kate Andrias foreshadowed how “a new labor law” based on sector-wide negotiating had “the potential to salvage and secure one of labor law’s most fundamental commitments—to help achieve greater equality, both economic and political—in the context of the twenty-first century economy.” Andrias said AB 257 would be a “huge step forward” and “a terrific effort to improve conditions of workers and give them a voice” in their industry within the limits imposed by federal labor law.

California’s efforts follow similar moves in other states, such as a 2019 New York law that allowed the state labor commissioner to create a wage board to reevaluate overtime rules for farmworkers. New York progressives are also trying to advance a new bill that would establish a council responsible for conditions in the nail salon industry. But AB 257 would be the first worker council to cover the fast-food industry, and it would do so in a state that is home to more than 1 in 10 Americans.

AB 257 would be the first worker council to cover the fast-food industry, and it would do so in a state that is home to more than 1 in 10 Americans.

Not surprisingly, industry groups like the California Restaurant Association are strongly opposed. Jot Condie, the group’s president, has argued it would lead to “increased employee costs and onerous new workplace rules,” while also stripping “franchisees of autonomy.”

The California Department of Finance, which serves as the governor’s fiscal policy adviser, has also opposed the bill. It warns that it would result in “significant ongoing costs” for the state’s Department of Industrial Relations, while also potentially raising “long-term costs across industries.”

So far, Fight For 15 and a Union, a worker movement supported by SEIU, and other labor groups have been able to overcome the opposition. Their efforts have been aided by new data from the Shift Project, a joint venture between academics at Harvard and the University of California, San Francisco, showing that the state’s fast-food workers make $16.21 per hour—about $3 less than other service-sector workers. The study found that 75 percent of those workers had less than two weeks of advance notice for their work schedules and that 90 percent want more predictable schedules. A May survey of California fast-food workers by Fight For 15 found that 85 percent of workers in the industry had experienced wage theft. According to the report, 80 percent of California’s fast-food workers are people of color and more than two-thirds are women.

What the report doesn’t capture is the day-to-day reality of working in the industry. Leticia Reyes, a mother of five who has worked at a Sacramento Jack in the Box for the past 16 years, says she learned about Fight for 15 when one of the group’s organizers approached her while she was taking out the trash at work. She was scared at first, but has since become active in the labor movement.

Last July, Reyes wrote an op-ed for the San Francisco Chronicle detailing what it was like when the air conditioning at her Jack in the Box went out for days during a heat wave. When Reyes and her co-workers complained, her manager blamed menopause. They responded by going on strike.

After more than 15 years with Jack in the Box, she still doesn’t have employer-provided health insurance or paid vacations. When I spoke with Reyes earlier this month, she’d been spending the day lobbying legislators in Sacramento. “This law would give us a voice so that employers have to listen to us,” she said in Spanish. “We’ve fought and fought. We’ve spoken to our managers, but they’ve ignored us. That’s why we’re here pressuring them to support us.”

Ronquillo, the Southern California Carl’s Jr. employee and home care worker, described a situation about six months ago during which a dissatisfied customer started screaming in the restaurant. The person then pulled out a gun and started shooting at the wall, she said. “Nothing ever happened after that,” Ronquillo explained. “There was nothing. You were just expected to keep working.”

Ronquillo hopes that AB 257 would help make workplaces like hers safer, while also providing better pay and more regular hours. “Even when I’m scheduled, I go to work and I just hope that they don’t send me home,” she said. “That’s an everyday thing. I have to worry. So, what do you do? Go get another job? Now I got four jobs. Where is the breaking point?”

Correction, August 18: An earlier version of this story misstated the margin by which the bill passed the assembly.