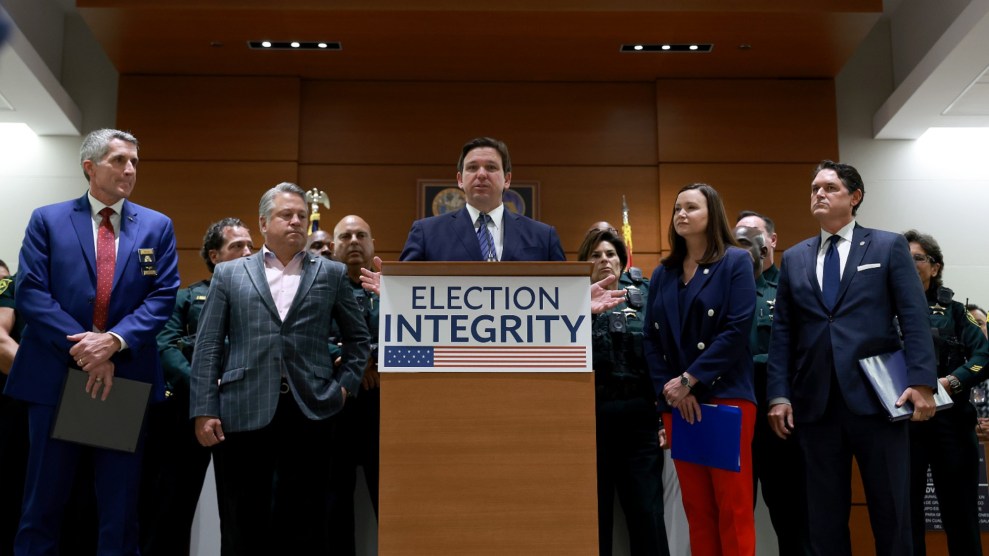 On Thursday, Florida Governor Ron DeSantis made a spectacle of a press conference to announce the arrest of 20 people with felony convictions for voter fraud. Surrounded by law enforcement, DeSantis, who’s running for re-election and has his eye on the GOP nomination for the 2024 presidential race, touted the work of the state’s newly created election crime task force and said the former felons, who make up a minuscule proportion of the more than 11 million Floridians casting ballots in the state, were ineligible to vote because they had previously been incarcerated for murder or sexual assault charges. The people arrested have since been charged with a third-degree felony that could lead to $5,000 in fines and up to five years in prison. “This is just the opening salvo,” the governor said. “This is not the sum total of 2020.”

DeSantis’ latest political stunt scapegoats ex-felons and willfully ignores the shortcomings in the implementation of an amendment to restore voting rights, which the governor himself has tried to undermine, and that has led to confusion about voting eligibility. In 2018, 65 percent of Florida voters approved a change to the state’s constitution known as Amendment 4 to allow people convicted of felonies who had completed their sentences to vote, with the exception of those convicted of murder or a sexual offense. My colleague Pema Levy wrote about the potential impact of the historic amendment at the time:

Returning the franchise to formerly convicted felons could upend the political landscape in Florida, a state divided evenly between Democrats and Republicans. The majority of those who were disenfranchised are expected to support Democrats, since felon disenfranchisement, a policy embraced and expanded after the Civil War specifically to deny voting rights to black men, has always had a disproportionate effect on African Americans and Latinos in Florida. This gives the Legislature, the incoming Republican governor, and his cabinet an incentive to thwart the will of the people.

Five of the people arrested on Thursday told the Miami Herald they were unaware that they weren’t eligible to vote because of the nature of their offenses “and had faced no issue registering.” They’re not alone in facing criminal charges over voting fraud allegations. In 2019, DeSantis signed a bill requiring that felons pay court fines and fees before having their rights to vote restored. Opponents of the bill compared it to a “modern poll tax” and pointed out that the state doesn’t keep a centralized database tracking people’s legal financial obligations, which has led ex-felons to unknowingly register to vote without having paid outstanding fees and being charged with voter fraud as a result, a ProPublica investigation showed.

“What DeSantis wanted from his event on Thursday was for the media to elevate his assertion that he’s taking a hard-line position against fraud,” Philip Bump writes in the Washington Post. “What he demonstrated most effectively, though, is how he has repeatedly taken steps that restrict voting access despite the undeniably minor frequency of fraud in Florida elections (as he himself has pointed out).”