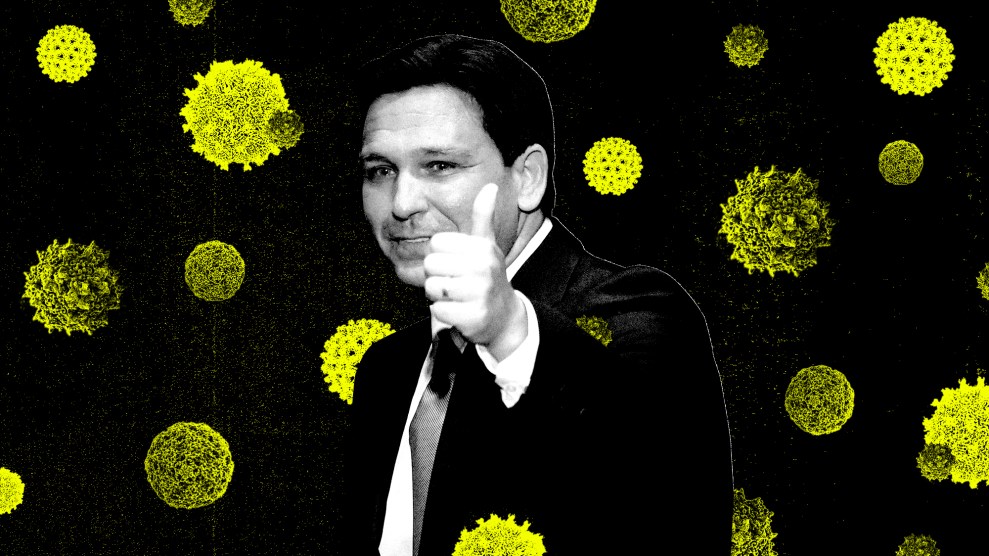 Dr. Mobeen Rathore has spent the better part of his career trying to protect the children in his practice from contracting deadly diseases like measles, whooping cough, and polio. As chief of the Division of Pediatric Infectious Diseases and Immunology at the University of Florida’s College of Medicine, Rathore remembers a time—just a few decades ago—when vaccination levels in Duval County, in the northeastern part of the state where he works, were lower than those in some of the poorest countries in the world: In 2002, just 77 percent of Duval County two-year-olds were up to date on their shots. So, he and his colleagues at the health department launched an all-out vaccination effort, deploying public health campaigns and training pediatricians to have persuasive conversations with parents. Over the years, they saw their hard work pay off: In 2019, the vaccination rate for two-year-old children in Duval was an impressive 98 percent.

But now, the progress that Rathore and his team made appears to be eroding. This year’s survey showed that the Duval vaccination rate has dropped to 92 percent. The pattern in Duval County appears to be even more pronounced for Florida at large. Before the pandemic, the state had been doing pretty well on its decades-long campaign to increase routine childhood immunization rates. An annual state health department survey released in January 2020 found that 93 percent of two-year-olds were up to date on their shots—a major improvement since the first survey of this kind in 2002, when the rate was just 73 percent. This year, the statewide rate had fallen to 81 percent.

In part, the dip can be explained by the pandemic itself. Early on, some parents may have decided to skip routine pediatrician appointments because they didn’t want to risk exposure to the virus. Indeed, though conclusive data from national childhood vaccination trends in the United States during the pandemic is not yet available, preliminary data from all over the world suggest that vaccination rates slipped in 2020. But Rathore believes that an ascendent anti-vaccination movement may have played a role in Florida’s downward trend over the last two years, as well. Among parents of his patients, he says, “We noticed that there are more questions” about routine immunizations. “And I think a lot of that, unfortunately, has to do with all the misinformation around the Covid vaccines.”

Many of the false narratives about Covid vaccines’ supposed deleterious effects—infertility, heart problems, AIDS, to name just a few of the most persistent myths—come from social media influencers, some of whom promote the work of anti-vaccine groups. But in Florida, there’s another important source of confusion: state leaders who have soured on Covid vaccines.

Bucking the advice of major medical organizations and the Centers for Disease Control and Prevention, Florida Surgeon General Joseph Ladapo has emphasized that the state doesn’t recommend Covid vaccines for any healthy children under age 16 because he believes the risks of the shots outweigh those of the disease itself. (They don’t.) In June, Florida Governor Ron DeSantis said that the state was “affirmatively against” Covid vaccines for children under the age of five, and Florida was the only state that didn’t pre-order shots for the youngest children when they became available (though DeSantis eventually relented after heavy criticism from public health officials, including those in the White House). More recently, last month Ladapo rejected a recommendation from a CDC advisory panel to add Covid vaccines to the schedule of routine childhood vaccinations, tweeting, “Thanks to @GovRonDeSantis, COVID mandates are NOT allowed in FL, NOT pushed into schools, & I continue to recommend against them for healthy kids.”

“I just don’t know why we have to politicize healthcare, especially for children.”

Rathore worries that public figures—be they social media influencers or politicians—are fomenting widespread distrust of the entire concept of immunization requirements for attending school. “Of all the things that government mandates, this is the simplest, and the most useful one,” he says. “I just don’t know why we have to politicize healthcare, especially for children.”

Other Florida pediatricians told me they have also noticed more parents questioning—and even outright rejecting—routine immunizations. One in Tampa, who requested to remain anonymous because her colleagues have been harassed for criticizing the anti-vaccine movement, told me that she has seen a sharp uptick in parents who reject routine vaccinations for their newborns. Many of them, she said, objected to immunizations because they saw them as an inappropriate intrusion by the government into parenting decisions. They told her they were against “anything that’s mandated by a governing body, whether that’s a medical one, like CDC, or the school board.”

That observation squared with what I saw at the annual conference of the parents’ rights group Moms for Liberty, where attendees wore t-shirts emblazoned with the slogan “I Don’t Co-Parent With the Government.” In his keynote address, DeSantis drew thunderous applause when he said that his state would never enforce a Covid vaccine mandate for children. “We’ve had families move across the country,” he boasted, “because they wanted to make sure that their kids wouldn’t be denied an education based on whether or not they took an mRNA vaccine for their minor.” (DeSantis’ office didn’t respond to a request for comment for this article.)

Jennifer Takagishi, a practicing pediatrician and the division chair of the pediatrics department at the University of South Florida’s Morsani School of Medicine, said that she saw the beginnings of increased skepticism around vaccines in her clinic even before the pandemic, with more parents citing spurious internet claims that vaccines contained dangerous ingredients that caused health problems. But then, when the pandemic hit, there was “the additional blow of the politicization based on whether different governors or other politicians believe in the [Covid] vaccine. Are they pushing for it? Are they saying it’s unsafe?”

Takagishi, who works mostly with low-income patients of color, said that one of the most frustrating strains of vaccine misinformation has been the rumor that routine immunizations are an attempt by the government to sterilize or experiment on minority populations. “I have had families say, ‘Oh, you only want to give us that vaccine because we’re Black, and if we were white would you still be giving us that vaccine? Are you trying to harm us with these vaccines?’”

Those fears are understandable, given the historic and persistent problem of racism in medicine. But particular tropes around childhood vaccines can be traced directly to activists’ targeted campaigns. For example, last year, Children’s Health Defense, the anti-vaccine group helmed by Robert F. Kennedy, Jr., released a movie called Medical Racism: The New Apartheid. In it, activists make a host of misleading claims, including that Black children have more robust immune responses, and that they are therefore being “overdosed” with certain vaccines. (That’s not true.) “We’re trying to explain to people that actually, we’re trying to decrease the racial disparities,” says Takagishi. “Minority families are more at risk for dying from some of these illnesses.”

Leaders in Florida’s Black communities have expressed concerns over the damage that the DeSantis administration has done by undermining confidence in the Covid vaccines. Rep. Al Lawson (D-Fla.), who represents a majority Black district in North Florida has said that he was worried that Ladapo’s unsubstantiated claims that the Covid vaccines weren’t effective would undo months of effort put into boosting vaccination rates. “When you have some African Americans who still talk about the Tuskegee experiment,” he told Politico in 2021, “it really doesn’t help that much for something like that to come out.”

It’s too early to say for sure whether Florida is entering a sustained period of routine vaccination decline—we probably won’t have a robust picture of the trends until the children who were born in the last few years enter school. But the pediatricians with whom I spoke pointed out that even a slight dip in vaccination coverage could be disastrous. Highly contagious diseases require “herd immunity”—high levels of protection in a given population to prevent outbreaks. Measles, for example, can spread if vaccination rates dip below 95 percent, while polio can spread with levels lower than 80 percent. Rathore said he’s concerned that in some Florida communities where anti-vaccine sentiment has taken hold, immunization rates will remain far below those thresholds. “Like-minded people will congregate,” he said. “So even though a decrease to 90 percent is bad, it could be much worse somewhere else.”

The Tampa pediatrician echoed those concerns, adding that she believed Florida state leaders had cynically played a role in fomenting parents’ distrust of public health recommendations in order to win votes. “They’re trying to play on people’s fears and validate them so they gain more of a following,” she said. “In my opinion, it’s very dangerous.”