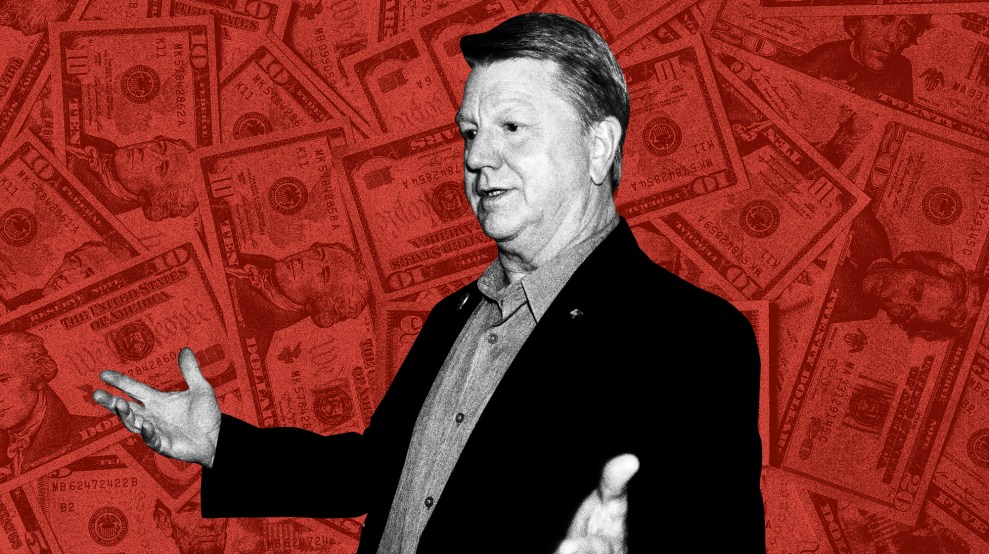 Even by the anything-goes standards of post-Citizens United America, the campaign finance practices of far-right Nevada secretary of state candidate Jim Marchant are comically reckless and almost certainly illegal, according to multiple complaints filed with the state.

They are referring to Marchant’s creation of Conservatives for Election Integrity, a political action committee that promotes his own campaign. Unlike Nevada candidates, who can receive individual donations of up to $10,000, PACs in the state can accept unlimited contributions. But crucially, PACs are supposed to make so-called “independent expenditures,” which Nevada law defines as spending “made by a person who is not under the direction or control of a candidate for office.”

In May, a primary opponent accused Marchant of “an inexcusable violation of Nevada law.” A similar complaint from the progressive group End Citizens United said Marchant’s actions constitute a “blatant violation” of state election law.

CEI, however, is obviously “under the direction or control of a candidate”: Marchant is the group’s president and only official. The email address for the PAC listed on the Nevada secretary of state’s website is jim@jimmarchant.com. Marchant, it seems, is using his PAC to evade donation limits. As End Citizens United explained in an August complaint covered by the Nevada Independent, CEI donated the legal maximum of $10,000 to Marchant’s campaign. The PAC then violated campaign finance limits by spending “significant sums of money to create, produce, and broadcast advertisements expressly advocating the election of Mr. Marchant,” the complaint stated.

More than half of the $413,000 CEI raised through September came from The America Project, an election-denier group co-founded by former Overstock.com CEO Patrick Byrne, former National Security Advisor Michael Flynn, and Flynn’s brother Joseph. In supporting Marchant, they are trying to secure victory for a QAnon-adjacent candidate who insists the 2020 election was rigged and who has vowed that Trump will return to power in 2024 if he and fellow members of his America First Secretary of State Coalition win in November. If Marchant prevails, he will responsible for overseeing Nevada elections and enforcing the campaign finance laws he is accused of ignoring.

Politicians often set up PACs to back other people’s campaign. What’s strange and likely illegal is that Marchant’s PAC is largely—if not exclusively—an extension of his own campaign. As End Citizens United noted in its complaint, the PAC’s commercials have touted “Jim Marchant for Secretary of State” and claimed, “We need Jim Marchant…for Secretary of State.” As Haw put it in his May complaint, “there is no daylight between Marchant’s campaign and the CEI PAC—they are one and the same.” Schrager calls what Marchant is doing through his PAC the “most obvious case I’ve ever seen of a candidate simply not caring what campaign finance laws prohibit.”

Violating Nevada campaign contribution limits is a felony offense in Nevada. But it’s not clear that Nevada’s secretary of state, Republican Barbara Cegavske, is doing much to enforce the law. In May, two months before the primary, Haw asked Cegavske’s office to “expedite its consideration” of his complaint and “sanction Marchant appropriately without undue delay.” In late August, a spokesperson for the secretary of state’s office told the Nevada Independent it was about to wrap up its investigation of Haw’s complaint. The case does not appear to have led to trouble for Marchant. Meanwhile, End Citizens United still has not heard back about its complaint. (The Nevada secretary of state’s office did not respond to multiple requests for comment.)

Schrager calls what Marchant is doing the “most obvious case I’ve ever seen of a candidate simply not caring what campaign finance laws prohibit.”

What’s so bizarre about Marchant’s behavior is how easy it is to follow campaign finance law without sacrificing much of anything. In practice, independent expenditures are often not all that independent. PACs are established all the time to boost a specific candidate, but they almost always make a minimal effort to retain the appearance of independence. The candidate is essentially never in charge of the PAC. Aaron McKean, a campaign finance expert at the nonpartisan Campaign Legal Center, says about Marchant decision make himself the head of his PAC, “I haven’t seen something like it before.”

Even efforts that watchdog groups consider illegal tend to be more subtle than what Marchant is doing. Earlier this year, the super-PAC Protect Ohio Values built a “secret” website to funnel polling data and other sensitive information to J.D. Vance’s Senate campaign. In June, End Citizens United and the Campaign Legal Center submitted a complaint to the Federal Election Commission alleging that the arrangement violated federal campaign finance law. “This abuse is perhaps one of the clearest and most flagrant examples of a candidate and a super PAC skirting campaign finance laws,” End Citizens United president Tiffany Muller said in a statement at the time. But compared to what’s been alleged of Marchant, Protect Ohio Values was incredibly tactful.

The PAC is not the only thing that’s concerning about Marchant’s campaign spending. Between April 29 and May 10—a critical stretch of the primary—Marchant loaned his campaign $163,700, according to Nevada campaign contribution reports. The loan to the campaign is not that surprising on its own—wealthy candidates self-fund their campaigns all the time. But as I reported on Wednesday, there is little evidence Marchant is rich. (And Marchant’s decision to loan an additional $33,000 to his PAC is highly unusual.)

The candidate has been “semi-retired” since 2003 and was deep in debt at the time of his second divorce in 2010. After the divorce, he lost two homes in foreclosure proceedings, according to Nevada and Florida court records. In a federal financial disclosure submitted while he ran for Congress in 2020, Marchant stated that he had less than $50,000 in liquid assets and was still paying off a personal loan from 2009. He valued his 50 percent share of Desert Ice, an ice vending machine company, at between $500,000 and $1 million. But he reported receiving no income from Desert Ice, or any other company, in 2019 and 2020. The only other source of income listed on the Nevada financial disclosure submitted during his secretary of state race is Social Security.

All of which raises the question: Where did Marchant get the nearly $200,000 he loaned his campaign?

All of which raises the question: Where did Marchant get the nearly $200,000 he loaned his campaign? It’s possible that his financial situation has dramatically improved and that he’s spending his newfound wealth trying to get elected. It’s also possible that someone gave Marchant money instead of making a formal contribution. That would be punishable by potential jail time. Figuring out where the money came from would likely require the kind of state-level enforcement that doesn’t seem to be happening.

“Marchant is financing his campaign for Nevada secretary of state illegally,” Schrager stresses. “That he is doing so in plain view demonstrates the weakness of campaign finance laws that, should he win, I expect he will weaken further for his friends and weaponize against his enemies.”