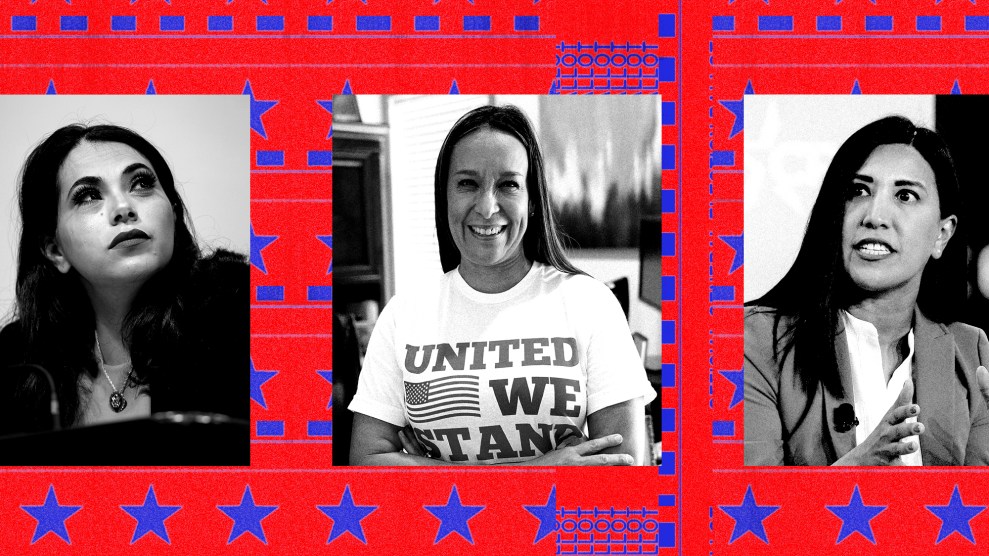 Just a few days before the November midterms, Rep. Mayra Flores (R-Texas) exuded confidence. “If you believe the Dems will hold the House and Senate on Election Tuesday,” tweeted the 34th District incumbent, who won a special election in the summer, “then I got some oceanfront property in Arizona.” Hispanic conservatives, she announced with conviction, “are the new swing vote.”

Fast-forward to election night and the South Texas GOP candidate’s bravado turned into an uppercase-filled Twitter freakout: “The RED WAVE did not happen. Republicans and Independents stayed home. DO NOT COMPLAIN ABOUT THE RESULTS IF YOU DID NOT DO YOUR PART!” It was clear by then that Flores was on her way to losing the House race to Democratic Rep. Vicente Gonzalez, bringing her short-lived stint in Congress to an end. With more than 95 percent of votes in as of Wednesday afternoon, Gonzales, a three-term representative who switched districts, had 52.7 percent against Flores’ 44.3 percent.

Mayra Flores, a QAnonish election denier, climate change denier, and the first Republican @elonmusk ever voted for, has lost her congressional race in Texas.

For all her boldness as a candidate, Flores had not spent much time in office. In June, she flipped a historically blue seat in a low-turnout special election to fill the unexpired term of Democrat Filemon Vela, whose decision to resign before the primaries sent the party scrambling to find a competitive candidate—and paved the way for the Republican newcomer’s remarkable victory. Born in Tamaulipas, Mexico, and “raised with strong conservative values,” she became the first Republican after Reconstruction to represent the district, which has since turned bluer and more Hispanic-heavy as a result of redistricting. She was also the first Mexican-born woman to serve in Congress.

“When we’re looking at the Rio Grande Valley and Congresswoman Mayra Flores,” Melissa Morales, executive director of the voter mobilization organization Somos Votantes, told me before the elections, “we’re talking about a special election where less than 8 percent of registered voters in that district turned out. We’re not looking at what is representative of the entire district.”

Flores’ meteoric ascension catapulted her to the national stage as the archetype of a notable trend of far-right Latinas running for office in Democratic strongholds. Democrats dismissed her victory as a fluke, but Republicans touted it as evidence of Latino voters moving to the right, consolidating former President Donald Trump’s gains in the region in 2020. But the results from the 2022 midterm elections threw cold water on the GOP’s visions of what they referred to as a Latina “Triple Threat” and deep-pocketed aspirations to make South Texas a battleground.

The firebrand trifecta was complete with Trump-endorsed Monica De La Cruz—an insurance agent and businesswoman raised in Brownsville by a single mother—and political novice Cassy Garcia, a former Texas Sen. Ted Cruz aide. Of the three hopefuls, only De La Cruz scored a victory last night. Running a campaign narrowly focused on border enforcement, she defeated Democrat underdog Michelle Vallejo, who a progressive platform supported by Vermont Sen. Bernie Sanders. She became the first Republican ever to win in the McAllen-based 15th congressional district. In 2020, President Joe Biden carried it by 2 percentage points, and back then, De La Cruz came just three points short of winning the House seat. “El Sueño Americano is alive and well in South Texas,” she said in a victory statement vowing to work for “all South Texans—be they Black, white Latino, or Asian; Republicans or Democrats; gay or straight.” In the 28th District, which encompasses Laredo, Garcia got knocked off by well-established Democratic incumbent Henry Cuellar.

It's a huge win—but the GOP had a cheat code: Redistricting turned the seat that went for Biden by two points to one that would have gone for Trump by close to three points. 1/2 https://t.co/zpSHuoEu1G

During his reelection victory speech in McAllen, Gov. Greg Abbott gave De La Cruz a special shout-out. “The first thing she will do is to fire Nancy Pelosi as speaker of the House,” he told the crowd. Abbot also celebrated “showing America that South Texas is now electing Republicans to office,” conveniently leaving out the party’s failure to grab the two other seats they had targeted.

South Texas, where support for abortion rights among Latinos might be broader than previously assumed, has long been a Democratic stronghold in the state and appears not to have been ready for a MAGA conservative like Flores. But she is undeterred and already hinting at another run in two years. An evangelical Christian and the proud wife of a Border Patrol agent whose campaign slogan is “God, family, country,” Flores espouses tough-on-immigration and anti-abortion stances and has voted against same-sex marriage, gun control, and contraception access legislation. She has also used hashtags associated with Qanon conspiracy theories in now-deleted tweets and suggested the Jan. 6 insurrection was set up by Antifa infiltrators.

Her parents voted for Democrats by default, she has told interviewers, because “that’s what we were told to do.” But eventually, she broke away from the party over issues such as abortion. Democrats, she said to CBS News, “don’t care about the Hispanic community, they don’t care about immigrants, they just use us to get our vote, and then once they get our vote they forget about us.”