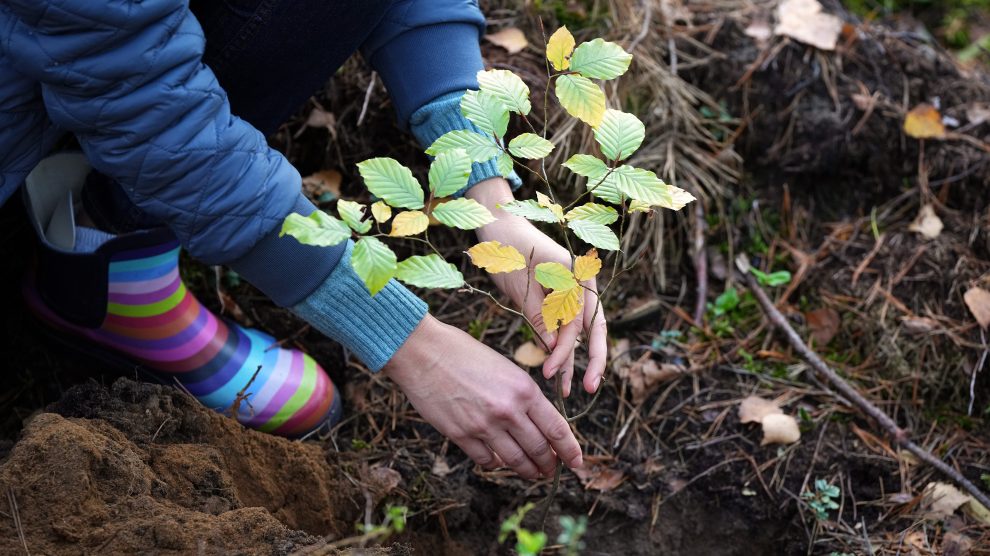 This story was originally published by the Inside Climate News and is reproduced here as part of the Climate Desk collaboration.

Countries’ climate pledges rely on “unrealistic” and “extensive” amounts of land for carbon removal projects like tree planting schemes, a new report from the University of Melbourne said.

A landmass larger than the entire United States, about 1.2 billion hectares, would be needed for countries to deliver on those plans, which largely ignore who lives on and manages the lands at issue, including the rights of Indigenous peoples and other land-based communities living in rural areas that rely on land for survival and culture.

“Countries are loading up on land pledges to avoid the hard work of steeply reducing emissions from fossil fuels, decarbonizing food systems and stopping the destruction of forests and other ecosystems,” said Kate Dooley, the lead author of the so-called Land Gap Report and a researcher at the University of Melbourne.

Dooley and her co-authors, more than 20 researchers from around the world, reviewed governmental climate plans and other official statements from 166 countries and the European Union as well as public land use data to determine the total land area needed for planned carbon removal and ecosystem restoration projects.

About 65 percent of the 1.2 billion hectares of land identified in the report would come from land currently being used for other purposes, such as agriculture, while the remainder would consist of degraded land identified for ecosystem restoration projects, such as the African “Great Green Wall” project aimed at planting trees, grasslands and plants across the continent’s Sahel region.

“​​Land can’t be the main climate solution when it needs to respond to too many other needs at the same time.”

Countries’ climate plans rely on a mix of emission reductions from sources like power plants and automobiles, as well as carbon-removal schemes and ecosystem restoration projects that reduce the amount of carbon in the atmosphere by sequestering it in biomass like trees or by using new technologies to capture carbon and inject it into geological reservoirs.

That difference is why one of the report’s recommendations is for governments and businesses to prioritize protecting existing primary forests, in part, by recognizing and enforcing the rights of Indigenous peoples and local communities that consistently outperform governments in preserving those types of forests. Old-growth forests also far surpass monoculture tree plantations in biodiversity, which provides multiple ecosystem benefits like water filtration and cycling, improved soil nutrients and resilience to the effects of climate change.

“We argue that the most effective and just way forward for using land based carbon removal is to ensure that Indigenous peoples and local communities have legitimate and effective ownership and control of their land,” said ​​Anne Larson, one of the report’s co-authors and a researcher at the Center for International Forestry Research in Washington, D.C.

But, the pledges analyzed in the Land Gap Report indicate that governments are on a pathway to an opposite outcome, requiring that the traditional lands of Indigenous peoples and local communities be transformed into tree plantations for carbon offset schemes.

During a press conference about the report, Sônia Guajajara, a Brazilian Indigenous leader recently elected to congress as a federal deputy, said that Indigenous people in the country are “under constant threat” over land disputes and need their land demarcated, which is legal recognition of the boundaries of Indigenous lands. She also called for a shift in mindset across societies to change consumption habits and break with existing economic models that drive the rapacious resource grabbing from the Amazon. Beyond governmental and businesses’ net-zero plans, consumers are increasingly offered options to offset their consumption of goods and services, like airline flights, through the purchase of carbon offset credits backed by similar tree-planting projects.

“We cannot have an international economic agenda that is disconnected from the environmental agenda,” Guajajara said.

The Land Gap Report, released Tuesday, comes days after the United Nations Environmental Program released its emissions gap report determining that governmental climate plans are not ambitious enough to stay below the 2 degrees Celsius, and ideally 1.5 degrees, threshold of the Paris Agreement. Human induced warming has already hit 1.25 degrees above pre-industrial levels, which is manifesting harmful effects like worsening flooding and more intense storms and droughts.

The Intergovernmental Panel on Climate Change, a body of experts that provides governments with comprehensive scientific analysis, said that the world will need to rely on carbon removal to some degree to limit global temperature rise to meet the Paris Agreement goals.

The authors of the Land Gap Report suggest that land-based carbon removal should only supplement deep cuts in the use of fossil fuels, and that governments should focus on restoring degraded forests and other ecosystems as well as separating the accounting of emission reductions and carbon removal efforts in their climate plans.

“​​Land can’t be the main climate solution when it needs to respond to too many other needs at the same time: food systems, biodiversity, local livelihoods, and local cultures,” Larson said. “We need nothing short of a paradigm shift in the way that we seek to solve the global climate crisis, and that new paradigm needs to not only be effective in addressing carbon emissions, it also needs to be just.”