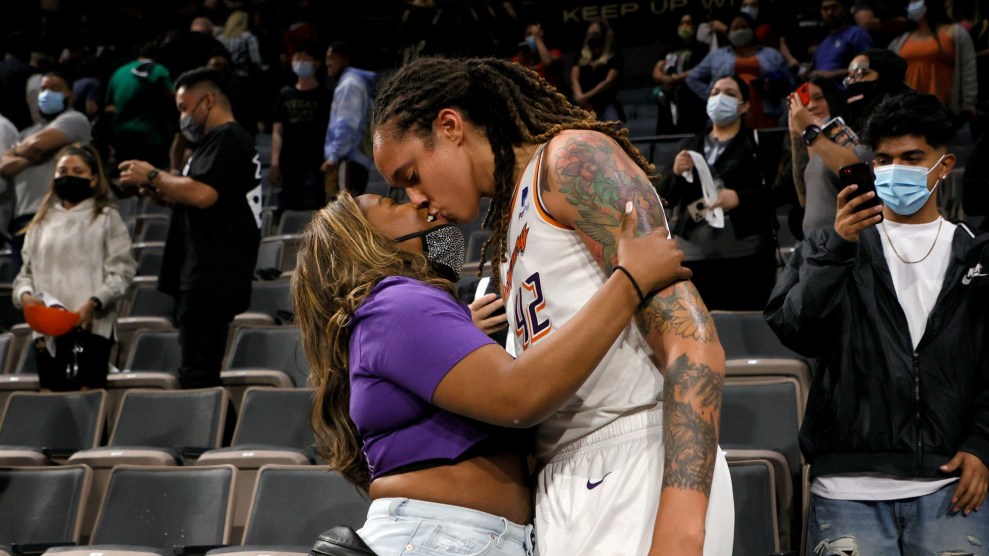 On Thursday, President Joe Biden announced that Brittney Griner is finally free. After 293 days in Russia detention and months of painstaking negotiations, the WNBA star—who had been sentenced to nearly a decade in a Russian penal colony—is safe and on a flight back home, according to the White House.

Moments ago I spoke to Brittney Griner.

“I’m glad to be able to say that Brittney is in good spirits. She’s relieved to finally be heading home,” said the president, joined by Vice President Kamala Harris and Griner’s wife, Cherelle, during a press conference on Thursday morning.

On February 17, while traveling to Russia to play basketball overseas, Griner was detained by Russian customs agents after they allegedly found vape cartridges with traces of cannabis oil inside them. At her trial, Griner admitted that she accidentally packed those canisters in a rush and said she had no criminal intent. After waiting in custody of a Moscow jail for six months, Griner was sentenced to nine years inside a penal colony in Morodovia, a labor camp notorious for its harsh conditions. Since May, the Biden administration has been negotiating for her release.

“She’s lost months of her life, experienced needless trauma, and deserves space, privacy, and time with her loved ones to heal,” said Biden. According to reports from CBS, Griner was released by Russia in a one-for-one prisoner swap for convicted arms dealer Viktor Bout.

Unfortunately, while Griner will be able to spend time with her family during the holidays, there are still unjustly imprisoned Americans in Russia. Paul Whelan, a former US Marine convicted on espionage charges after being arrested in 2018, is still incarcerated. In a statement, Whelan’s brother praised the prisoner exchange but expressed disappointment that Paul Whelan remained behind bars, calling the result “a catastrophe for Paul.”

MORE: “I am so glad that Brittney Griner is on her way home,” Paul Whelan’s brother David Whelan says.

“The Biden Administration made the right decision to bring Ms. Griner home, and to make the deal that was possible, rather than waiting for one that wasn’t going to happen.” pic.twitter.com/H0MiIkZta4

“Sadly for illegitimate reasons, Russia is treating Paul’s case differently,” said Biden. The president said the administration had not forgotten about Whelan and will continue negotiating for his release. During her speech, Cherelle Griner took time to highlight Whelan’s unjust imprisonment and promised to continue fighting for his freedom.

“Today my family is whole, but unfortunately, as you all are aware, there are so many other families who are not so,” said Cherelle. “BG is not here to say this, but I will gladly speak on her behalf and say that BG and I will remain committed to the work of getting American home, including Paul, who’s family is in our hearts today as we celebrate BG being home.”