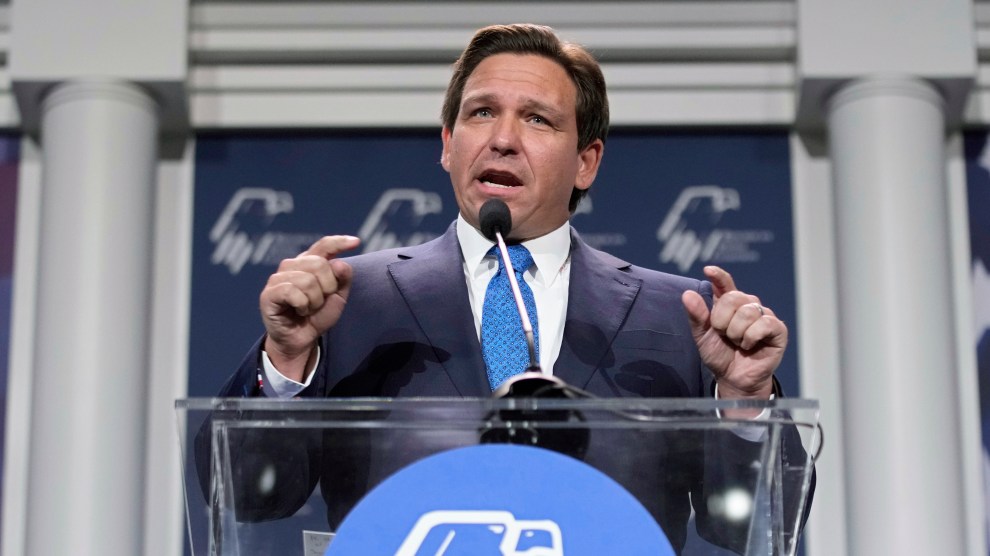 Earlier this week, Florida Governor Ron DeSantis called for a grand jury to investigate “wrongdoing” on the part of pharmaceutical companies and government officials who promoted Covid-19 vaccines. DeSantis detailed his grand jury plans during a highly-publicized press conference—the kind that has become a trademark of his tenure as governor. During the conference, he also announced that Florida Surgeon General Joseph Ladapo would lead a study to “assess sudden deaths of individuals in good health who received a Covid-19 vaccine.”

While much of the media coverage so far has focused on DeSantis’ dreams of a grand jury, another new project of his has drawn less attention: The governor also said he’s convened a group called the Public Health Integrity Committee, a panel of seven scientists and physicians who will, according to a press release, “be overseen by the Surgeon General to assess federal public health recommendations and guidance to ensure that Florida’s public health policies are tailored for Florida’s communities and priorities.”

Readers who have been following pandemic contrarians will not be surprised by the cast of characters that DeSantis has assembled. Several are affiliated with the Great Barrington Declaration of 2020, a project of the deep-pocketed libertarian think tank American Institute for Economic Research, which argued for lifting almost all coronavirus restrictions before vaccines or effective treatments were available. Though the proposal received widespread criticism, the Great Barrington Declaration caught the attention of the Trump Administration—the authors met with the president’s top Covid advisors in 2020.

In addition, almost all of DeSantis’ committee members have worked with or contributed to the Brownstone Institute, a think tank founded in 2021 to oppose pandemic restrictions. Brownstone has promoted anti-vax rallies and endorsed the use of the discredited drugs ivermectin and hydroxychloroquine to treat Covid. Most of the new committee members have Florida-specific expertise, having participated in DeSantis’ widely-publicized roundtable discussion in October, in which the governor and Ladapo issued a recommendation against vaccinating healthy children against Covid-19. DeSantis promises that this stellar group will “offer critical assessment” of public health policies and recommendations. “We know that there’s been a lot of faith destroyed in public health,” DeSantis said, “and I think that it’s important we have folks who people actually can rely on.”

“We know that there’s been a lot of faith destroyed in public health, and I think that it’s important we have folks who people actually can rely on.”

So who are these folks, anyway? Here’s a brief rundown of their bios:

Jay Bhattacharya is an economist and professor of health policy at Stanford and one of the original authors of the Great Barrington Declaration. Bhattacharya—who has called pandemic lockdowns “the biggest public health mistake we’ve ever made”—frequently criticizes Covid-19 safety measures to his 328,000 Twitter followers. Earlier this month, Twitter CEO Elon Musk invited Bhattacharya to Twitter headquarters to learn about the “blacklist” he was supposedly placed on before Musk took over. Bhattacharya has become an ardent defender of DeSantis’ Covid-19 policies, testifying in defense of the governor’s ban on school mask mandates in August 2021 and participating in October of that year in the governor’s roundtable. He also serves as a fellow with the Academy for Science and Freedom at the right-wing Hillsdale College and as a senior scholar at the Brownstone Institute.

Martin Kulldorff, a Swedish biostatistician, formerly affiliated with Harvard University, was another co-author of the Great Barrington Declaration. He has since distinguished himself as an outspoken critic of pandemic safety measures, including contact tracing, vaccine and mask mandates, and school programs that test asymptomatic students for the virus. Last winter he supported the trucker convoys opposing vaccine mandates. Like Bhattacharya, Kulldorff participated in DeSantis’ October roundtable and is a fellow at the Academy for Science and Freedom. The Brownstone Institute is also on his resume, where he serves as the senior scientific director. In one of his calls for punishment for proponents of pandemic safety measures, he tweeted out a piece called “Who Will Be Held Responsible for this Devastation?” by his Brownstone Institute colleague Jeffrey Tucker, which was accompanied by an image of a guillotine.

Tracy Beth Høeg, another participant in the October roundtable, is an orthopedist and epidemiologist currently working as a researcher at the Florida Department of Health. The author of several studies that find fault with masking and vaccination policies, she’s a member of Urgency of Normal, a group of physicians who opposed masking requirements in schools. She’s also a plaintiff in a lawsuit against California governor Gavin Newsom, the state attorney general, and the Medical Board of California over a new law that prohibits physicians from spreading medical misinformation. Høeg and the other plaintiffs claim their first amendment rights have been violated.

Christine Stabell Benn, a Danish vaccine researcher at the University of Southern Denmark, focuses on “non-specific effects” of immunizations—basically when vaccines have a health effect other than the intended one. Some of her research is legitimately important. Before the pandemic, she published studies on additional health benefits for children in Guinea-Bissau who had received vaccines for tuberculosis, smallpox, and polio, as Mother Jones reported in 2019. In April, she authored a widely publicized study, published as a non-peer-reviewed pre-print in the journal The Lancet, finding that while non-mRNA Covid vaccines were associated with an overall reduction in mortality (even from causes that had nothing to do with Covid), mRNA vaccines didn’t offer the same benefits. Based on that research, Benn told Politifact that she believed that it was an oversimplification to claim that mRNA vaccines reduce mortality. Politifact countered that argument, pointing out that people take the vaccines in order to prevent death specifically from Covid-19, not other causes. A vocal supporter of the Great Barrington Declaration, her work has also been featured in posts on the website of the Brownstone Institute.

Bret Weinstein is a former professor of biology at Evergreen State University. He distinguished himself during the pandemic with his full-throated support of ivermectin. In an interview with Tucker Carlson, he called it “a near-perfect Covid prophylactic” and touted it as an alternative to vaccines. Last year, on Joe Rogan’s podcast, Weinstein concluded that ivermectin was “good enough to end the pandemic at any point you wanted,” were it not for greedy Big Pharma and its vaccines, which he said he hadn’t taken. He spoke at several Defeat the Mandates rallies earlier in 2022, and in October he participated in DeSantis’ October roundtable. Weinstein resigned from his position at Evergreen in 2017 after suing the college over for $3.85 million over the university’s “Day of Absence,” when white students were asked to discuss racism off-campus for a day. Weinstein, who accused the administration of declining to “protect its employees from repeated provocative and corrosive verbal and written hostility based on race, as well as threats of physical violence,” eventually reached a $500,000 settlement agreement with the college.

Joseph Fraiman, another October roundtable veteran, is a Louisiana-based emergency medicine physician who claims that the Covid-19 vaccines are more dangerous than public health officials claim. In September, he published a study in the journal Vaccine finding that “Pfizer and Moderna mRNA Covid-19 vaccines were associated with an excess risk of serious adverse events.” Critics pointed out several problems with his work, chief among them that it cited data from the Vaccine Adverse Effects Reporting System (VAERS), which isn’t verified—anyone can make an entry in it, without providing any proof that the vaccine caused the health effect they reported. He has become an outspoken critic of fact-checkers and misinformation policies on social media platforms. “Fact-checkers have become Government sanctioned thought police, who serve and protect the public from dissenting views, brandishing the misinformation label as their weapon, and censorship their penal tool colloquially referred to as Twitter jail,” he tweeted in November. In April, Fraiman published his 5,000-word request for a religious exemption to the vaccine mandate at a hospital where he works on the Brownstone Institute site.

Steven Templeton is an associate professor of microbiology and immunology at the Indiana University School of Medicine. He’s also the of the forthcoming book Fear of a Microbial Planet: How a Germophobic Safety Culture Makes Us Less Safe, which he describes in a Stubstack post last year as “a manual for post-pandemic germophobia therapy.” The book will be published by—you guessed it!—the Brownstone Institute.