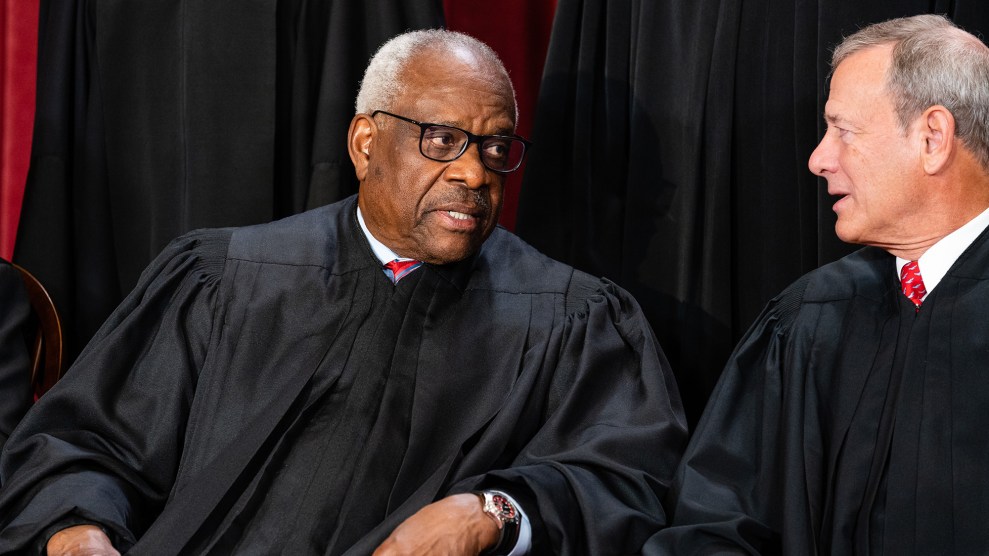 On Thursday, the Reverend Robert Schenck testified before Congress about the anti-abortion influence campaign he ran targeting the Supreme Court, recounting the bombshell revelations that have clouded the highest court in scandal first reported in November by the New York Times. While speaking to the lawmakers, Schenck shared a new detail: that at least one justice knew about his efforts—and approved of them.

“Justice Thomas commended me,” Schenck recalled of one interaction, “saying something like: ‘Keep up what you’re doing. It’s making a difference.'”

Not only were justices subjected to stealth lobbying, at least one of them may have approved of it.

For two decades, Schenck ran a secret operation designed to embolden conservative Supreme Court justices in their resolve to overturn Roe v. Wade. When he began in the late 1990s, Schenck believed that the conservative justices felt alone and disfavored in the media and needed “shoring up.” So he got an office across the street from the court, bought access to the justices by joining the court’s nonprofit Supreme Court Historical Society, and recruited wealthy donors, whom he called “missionaries,” to befriend the conservative justices. “We wanted to create a circle of people around them that would encourage them, applaud them, literally thank God for them and assure them of prayerful support,” he explained Thursday, “and by being present, indicate to them that there were many, many people—Americans—who were behind them and hoped that they would render strong, unapologetic, opinions that would support the positions important to us.” One couple recruited by Schenck to do this work successfully became friends with Justices Samuel Alito and Antonin Scalia and their wives, even vacationing with them at their home in Jackson Hole, Wyoming.

Schenck’s revelations have further punctured the illusion that the justices are above the political fray, deciding cases only according to their view of the law. The trips, meals, and friendships Schenck helped orchestrate show how the lack of ethics rules at the court makes the justices vulnerable to pressure campaigns that could sway their rulings. Schenck told the Times that he instructed his “missionaries” not to mention him or his group, Faith and Action, to keep his affiliation hidden. But the allegation that Justice Thomas knew what Schenck was doing raises new possibilities: not only were justices subjected to stealth lobbying by wealthy friends, at least one of them may have approved of the operation.

Toward the end of the hearing, Rep. Mondaire Jones (D-N.Y.) asked a clarifying follow-up about Thomas’ alleged comments. He wanted to know what Thomas meant when he said them.

“The context of that, congressman, was the work I had been doing introducing the individuals I referred to as stealth missionaries into the life of the court,” Schenck responded. “I saw Justice Thomas in the hallway of the court. And he made a point to signal to me and he said, ‘Keep up your good work. It’s making a difference.’ The context of that was what we had been dong at the court for at that stage nearly 17 years.”

The implications of Schenck’s testimony are shocking: After almost two decades of placing individuals into the lives of Supreme Court justices, a few with great success, at least one justice was aware of that work, applauded it, and believed it was influencing the court. This is Schenck’s uncorroborated account. But if true, it signals more complicity by the court than previously known. If Thomas was wise to Schenck’s work, were the other justices as well.