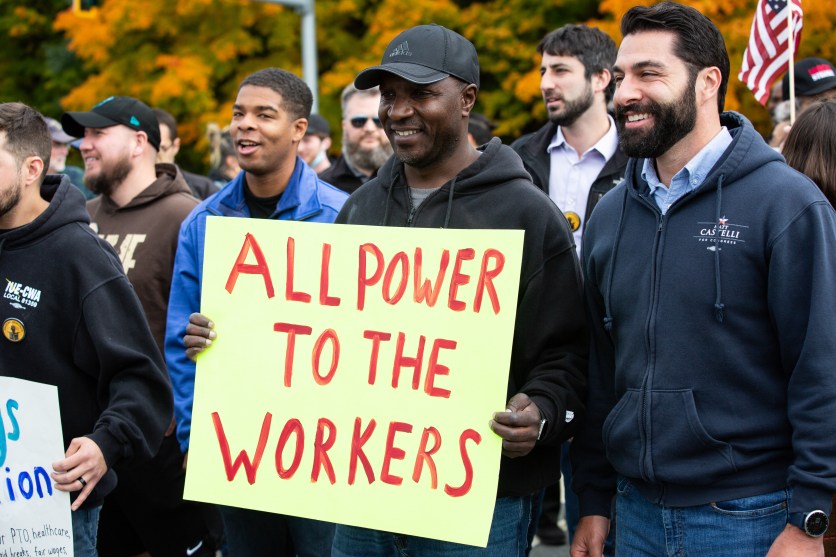 Protester holds a placard saying, ''All power to the workers'' during the rally.Photo by Karla Cot

A new report, published on Friday, finds that “more than two out of three workers who have been discharged received no reason or an unfair reason for the termination” this year.

In a survey of workers, the National Employment Law Project (NELP) found that 69 percent of respondents told them they had been let go for “no reason or for an unfair reason.” Only “one out of every three terminated employees received severance,” according to the report. Many workers told NELP they stayed at positions where they were faced with poor—or even illegal—working conditions and did not speak up for fear of losing their jobs.

The report highlights a long-held problem for workers: the lack of “just cause” employment protections. Just cause protections would prohibit employers from firing workers without an explanation, prior warning, or due process. The protections look to counter the standard “at-will” employment system in the United States which allows employers to terminate employees for little to no reason, creating a predatory power dynamic. This system means that in low-wage jobs with few employment protections—delivery app drivers, retail cashiers, pharmacy workers—there is little safeguard against unjust and often arbitrary firings.

These conditions are perhaps why 2022 was a big year for unionization. Unions won more elections than they have in 20 years, with employee rights and job security being the second and third reasons for labor organizing. But unions aren’t the only route to a just cause standard.

New York City councilmember Tiffany Caban has introduced a bill to provide just cause protections to all city employees, including private sector and non-union workers. She’s not alone: For the first time in decades, a mass worker-driven movement to replace at-will employment with just cause protections has erupted. Advocates are calling for legislation to be enacted on the local, state, and federal level to include key protections such as requiring employers to present documented reasons for firing; giving fair notice to workers about workplace problems and allowing time to improve; restricting electronic monitoring; guaranteeing severance pay; and ensuring forced arbitration requirements do not interfere with workers’ rights.

40 percent of currently employed workers—including more than half of Black workers—have a month or less of savings on average, according to the report, which, without guaranteed severance and other just cause protections, leaves them highly vulnerable.

Without a financial safety net, 35 percent of workers are pressured into “hazardous” or “unhealthy” working conditions, NELP says. One 59-year-old worker in Montgomery County, Maryland said that he complained to his management about working a 12-hour work day in “90-degree heat without [a] water break [and] just a half hour lunch break” and was subsequently fired.

As we head into our fourth year of the Covid-19 pandemic, and an additional winter “tridemic,” employers continue to force workers to choose between their health and their livelihoods. Findings show 66 percent of employees have worked while sick and forty-seven percent postponed necessary medical care in order to work.

There have been some wins in recent years. Fast food employees in New York and rideshare workers in Washington won just cause protections in the last two years–protecting them through a higher standard of termination. Meanwhile, the report finds plenty of work left to be done.

One 52-year-old survey respondent in Tippecanoe County, Indiana told researchers that his employers “fired [him] for being left-handed”—a legal reason under current at-will employment law.