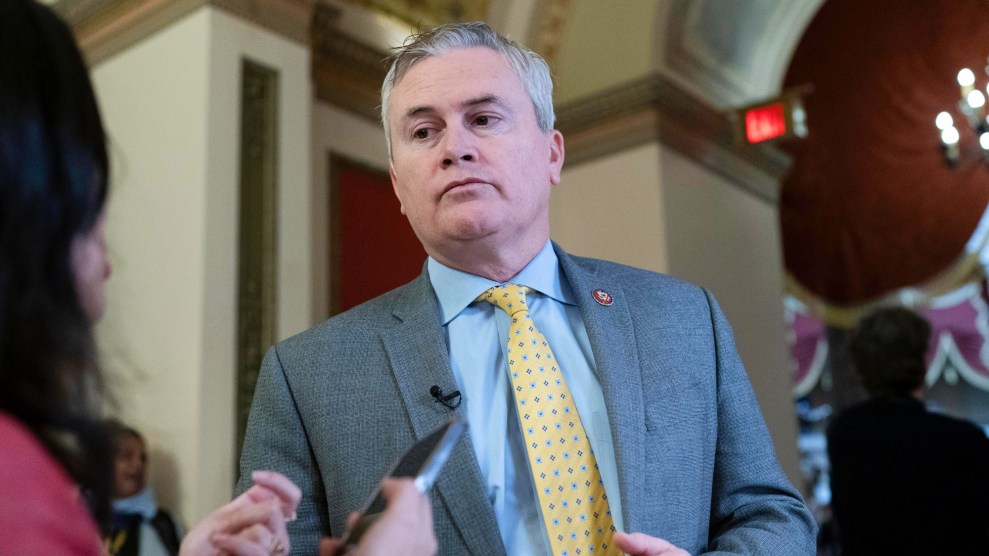 On Sunday, James Comer, who chairs the House Oversight Committee, appeared on CNN and released a letter demanding visitor logs for Joe Biden’s Wilmington home, where classified material from Biden’s time as vice president was recently discovered. “Without a list of individuals who have visited his residence, the American people will never know who had access to these highly sensitive documents,” Comer, a Kentucky Republican, wrote to White House chief of staff Ron Klain.

The letter followed a White House announcement Saturday that five pages with “classification markings” were found adjacent to Biden’s Wilmington garage on Thursday, a day after one page with a classification marking was found. Personal lawyers for Biden had previously found classified documents at the Penn Biden Center in Washington on November 2 and in Biden’s garage in Wilmington in December.

The discovery of classified material in nonsecure locations has drawn comparisons to Donald Trump’s taking of hundreds of documents, including highly sensitive material, from the White House to his Mar-a-Lago club and residence in Florida. Attorney General Merrick Garland named Robert Hur, a former US attorney in Maryland, as a special counsel to oversee an investigation of into whether any laws were broken in the Biden matter—a step mirroring Garland’s appointment of another special counsel, Jack Smith, to investigate Trump’s hoarding of documents and his efforts to retain power after the 2020 election.

But the similarities are limited. No evidence has emerged that shows the material at Biden’s office or home was moved there in deliberate violation of the law. And Biden’s lawyers appear to have proactively contacted the Justice Department about their discovery and immediately returned the material to the National Archives after finding it.

Trump seems to have deliberately removed secret material and important records from the White House, and he spent more than 18 months rebuffing efforts by the National Archives aimed at the recovering it. He refused to return the documents even after receiving a Justice Department subpoena. His lawyers claimed he had returned all the material he had taken. An August search by the FBI revealed that was false. The Justice Department has also said it suspects some documents Trump took are still missing and has noted that many folders found at Mar-a-Lago were empty.

In seeking a warrant for the August search of Mar-a-Lago, an FBI agent said the bureau had “probable cause to believe that evidence of obstruction will be found” there. That indicates that prosecutors believed Trump or aides committed crimes by attempting to hang onto material that belonged to the government. That’s a far more serious issue than what has been alleged, at least publicly, in the Biden matter.

But Republicans have brushed off such differences. In recent days, critics have taken issue with Biden’s failure to announce the initial discovery of material at the Biden Center before the midterm election, though he faced no legal requirement to do so.

“Who decided to hide these facts from the American people six days before the election?” former New Jersey Gov. Chris Christie said Sunday on CNN.

Comer, in his own CNN hit, said he is seeking “equal treatment here with respect to how both former President Trump and current President Biden are being treated with the document issue.”

Comer said, however, that he will not seek visitor logs for Mar-a-Lago. “I don’t feel like we need to spend a whole lot of time because the Democrats have done that for the past six years,” he explained.