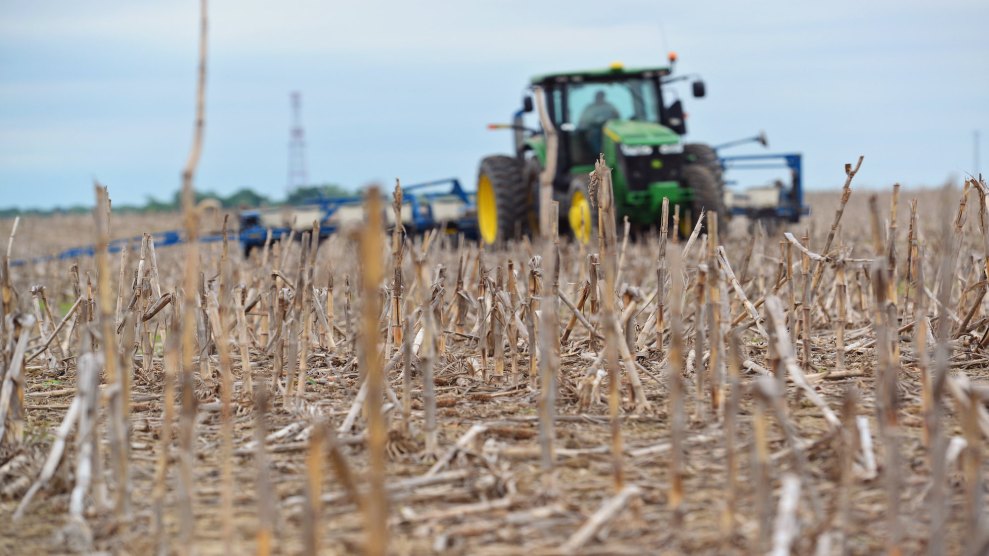 This content is written and paid for by American Farmland Trust; it is not written by and does not necessarily reflect the views of Mother Jones’ editorial staff. See our advertising guidelines to learn more.

When Joe Rothermel quit his job with an aerospace manufacturer in California in 1995 and moved back to the family farm in Illinois, his father introduced him to no-till farming. It’s one of the many practices farmers use to improve soil health, reduce the environmental impact of their operations, and sequester atmospheric carbon—part of a suite of tools known as regenerative agriculture.

This piqued Joe’s interest, and he’s been experimenting with regenerative farming ever since. Today he uses minimal tillage, and after harvesting the corn and soybeans in his fields, he plants cover crops. They’re grown solely to build soil organic matter (carbon), reduce erosion, and keep nutrients for the plants in the field and out of waterways. Rothermel adopted these practices because of how they improve productivity and his bottom line, but he’s keenly aware of how they also help the environment.

“I’m not too familiar with the particulars of the science,” Rothermel says. “But I do know I have increased the carbon content of my soil. Tests show that it jumped 20 percent from 2006 to 2018. There is now more carbon entering the soil than leaving it.”

Practical knowledge is proof for most farmers. But when it comes to regenerative agriculture’s role in combating climate change, science paves a clear path forward.

Research by American Farmland Trust, an organization that’s been protecting farmland and implementing regenerative practices for 40 years, shows that widespread adoption of just the two practices Joe has implemented—no-till and cover crops—on just 70 percent of US cropland is the equivalent of removing 53 million cars from the road.

The fact that regenerative agriculture is growing in popularity among farmers is a good reason to be optimistic. There’s also increasing support from corporations that produce and sell food to consumers. All of this represents a big step forward in the battle against climate change, and agriculture’s role in it.

A dramatic spike in global temperatures has marked the past century. Scientists attribute the trend to an increase in greenhouse gases (GHG) released into the atmosphere primarily through energy production, including burning coal, oil, or natural gas. These gases trap the sun’s heat, resulting in global warming. Although the origins of global warming are now firmly established, most people don’t know that a lot of the carbon in the atmosphere has been released from the soil as a result of land clearing and misguided farming practices.

In late 2018, the United Nations’ Intergovernmental Panel on Climate Change stated that reaching the goals of the Paris climate agreement simply by reducing GHG emissions is essentially impossible despite how crucial this is. The good news is that carbon in the air can be recaptured by rebuilding soil health.

Soil’s ability to store carbon can be enhanced through conservation strategies like no-till and cover cropping that contribute to regenerative agriculture—a system involving broad conservation practices that serve farming operations, the environment, and society as a whole.

According to Jennifer Moore, American Farmland Trust’s Climate Initiative Director, “Some examples include grassed waterways and buffer strips to protect water quality, hedgerows to reduce erosion, integrated livestock management and grazing for soil fertility, and the return of marginal lands to perennial grasses and trees. Taken together, the full spectrum of regenerative farming practices serves both to maintain existing soil carbon and to increase soil carbon by pulling it from the atmosphere.”

Instead of leaving fields bare after harvest, Rothermel and many other farmers now grow cover crops solely to feed, protect, and enrich the soil. These crops help suppress soil diseases, pests, and weed growth as well as provide material for grazing livestock. Cover crops also have the potential to improve soil resiliency amid unpredictable or turbulent rainfall.

Sequestering carbon—keeping it stored in soil—is equally crucial. When soil is disturbed, its carbon is exposed to oxygen and released into the atmosphere. Conservation tillage eliminates or reduces the number of tillage passes, leaving surface crop residue to protect the soil and keep carbon in the ground.

“If we treat soil carbon as a renewable resource, we can change the dynamics,” Thomas J. Goreau, a biogeochemist and expert on carbon and nitrogen cycles, told Yale Environment 360. “When we have erosion, we lose soil, which carries with it organic carbon into waterways. When soil is exposed, it oxidizes, essentially burning the soil carbon. We can take an alternate trajectory.”

Packaged food giants have responded to consumer demand for sustainability by introducing climate-friendly strategies in recent years. General Mills announced it would apply regenerative agriculture to 1 million acres of the land for sourcing ingredients by 2030. “Soil health is the foundation of General Mills’ sustainability efforts,” the company said. “The company believes healthy soil has the potential to sequester carbon and the ability to regenerate the land to a more holistic state—one that is more environmentally and financially resilient for farmers.”

Many of those companies and a handful of organizations, including American Farmland Trust and the Nature Conservancy, are involved with Field to Market, the Alliance for Sustainable Agriculture. The group initiative is uniting the agricultural supply chain to support resilient ecosystems and improve farmer livelihoods in the United States.

“We need every tool possible to absorb more carbon than we produce, and we need it soon,” says John Piotti, president and CEO of American Farmland Trust. “We see companies like General Mills and Kellogg’s willing to work with farmers to adopt regenerative practices, and consumers are rewarding them for this action.”

Soils must be part of the plan to address climate change

When we talk about tackling climate change, the conversation turns to transportation, energy, and manufacturing. Agriculture is often overlooked, but it shouldn’t be. While other sectors can limit the amount of greenhouse gases entering the atmosphere, the truth is that better farming practices can sequester carbon in the soil and effectively provide climate mitigation while rebuilding soil for future generations. Perhaps more than any other industry, farmers are uniquely positioned to deliver natural climate solutions.

“Soils of the world must be part of any agenda to address climate change, as well as food and water security,” Rattan Lal, director of Ohio State’s Carbon Management and Sequestration Center School of Environment and Natural Resources, told CSA News. “I think there is now a general awareness of soil carbon, an awareness that soil isn’t just a medium for plant growth.”

“There is no question that better farming practices provide a wide range of environmental benefits, including sequestering carbon as well as economic benefits for the farm,” Piotti says. “The science is pretty damn clear.”

“We need to come up with a system that compensates farmers not only fairly for the food that they grow, but for the range of critical environmental services they provide. Part of that answer is in the marketplace, and part of that answer is to also have a strong set of government policies to provide incentives for farmers to do what will benefit us all so that we can live on a sustainable planet.”