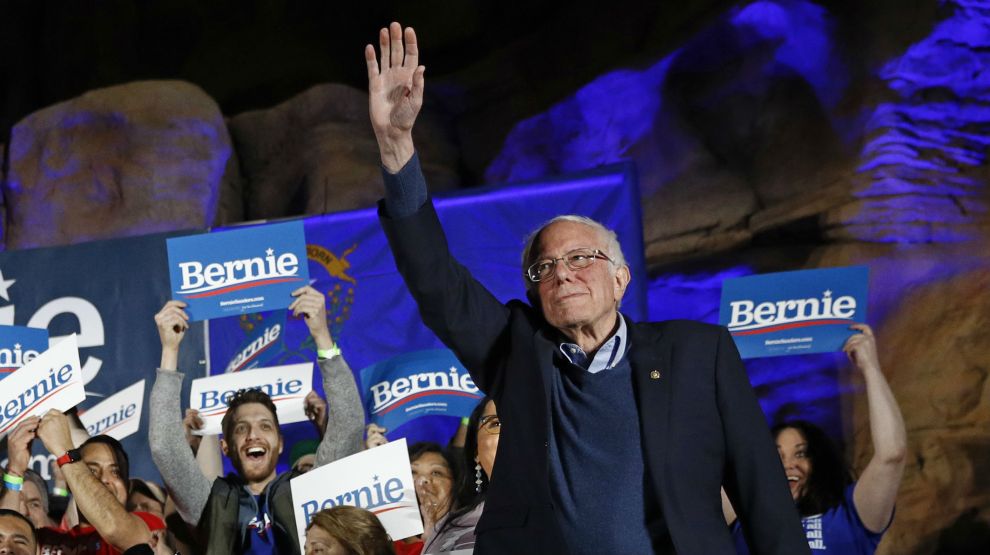 Before Amy Klobuchar spoke at the Las Vegas headquarters of the Culinary Union Local 226 on Tuesday, the union’s secretary treasurer, Geoconda Argüello-Kline, wanted to get a few things straight. If you’re a Democrat running in Nevada, Argüello-Kline and the powerful union she represents are the last people you want to piss off. But as she spoke to the room of hotel guest-room attendants—a hundred or so women, many of whom were, like their Nicaragua-born leader, immigrants themselves—it was clear that Bernie Sanders had done just that.

Their union was a movement of “strong women who fight for their families,” Argüello-Kline said, and it had done its diligence. Before the caucuses, they had brought the candidates in for town halls, grilled them on their policies, and finally in February, circulated a “report card” on their stances on issues important to members. In that flier, Culinary stated that Sanders’ Medicare for All proposal for would “eliminate” the union’s own health care plan—while pointing out that four of his top rivals would “protect” it.

Biden’s team was right about the value of a multiracial coalition, but wrong about the candidate who was going to build it.

“And what has happened?,” she asked. “There’s been a terrible attack from Sen. Sanders’ supporters.” She likened the harassment she’d received online and over the phone to the abuse women of color have faced from President Donald Trump. “We’ve seen how they see us,” she continued, lumping them together. “After 40 years I’ve been in this country, they never will consider us the same like everyone else.”

But when voters’ preferences were tabulated on Saturday (mercifully, without any major complications so far), Sanders had won a commanding victory in Nevada. He had strong support across the state and all demographics—and most notably, a majority of delegates at four of the six casino-based caucus sites on the Las Vegas strip where Culinary members work. That was more or less the story out of Nevada; if New Hampshire was where Sanders became the frontrunner, it was in Nevada where his Democratic opponents showed just how ill-prepared they are to stop him. And they’re also running out of time. After South Carolina, which votes next Saturday, there’s just four days until Super Tuesday. Early voting is already under way in key states such as California. Michael Bloomberg has based his whole candidacy on the idea that the primary doesn’t really start until March 3rd; but it might just be where it ends.

You could read the tea leaves favoring Sanders fairly early on, including by keeping a close eye on the Culinary Union itself. Though Argüello-Kline made her frustrations with the Vermont senator and his online supporters clear—and other campaigns rushed to show their support—Culinary held a press conference last week to announce it wouldn’t be endorsing anyone. It was as good a sign as any that the union did not believe any of the candidates in the race were capable of slowing what he’d already set in motion in Nevada. For his part, former Senate Majority Leader Harry Reid, the dean of the state’s Democratic establishment, wasn’t endorsing either—he told reporters he’d cast an early vote for “uncommitted.” Neither of the state’s two Democratic senators, nor its Democratic governor, decided to get involved.

It was evident listening to the other candidates as they made appearances in Nevada over the last week that Sanders was no longer a candidate they expected to simply fade away on his own. At a state party confab last weekend, and again at a community center west of downtown Las Vegas on Thursday morning, former vice president Joe Biden ripped into Sanders for a 2005 vote in favor of a law blocking civil suits against gun manufacturers from victims of gun violence, calling the policy “immoral” while attributing the lack of meaningful gun control to legislative “cowardice.” Sanders wasn’t even a Democrat, Biden pointed out at his election-eve rally on Friday—and warned that his proposal to bump millions of Americans off their private health insurance would be deeply unpopular.

Sanders’ opponents may agree he won’t make the best nominee, but none can agree on how to stop him.

Billionaire Tom Steyer’s radio ads warned Nevadans that the only way to neutralize Republican arguments that whomever the Democrats nominated was a socialist was to nominate a businessman like himself. Even Elizabeth Warren has begun to speak more critically of her longtime political ally, echoing the Culinary Union’s criticism of Sanders’ supporters and suggesting that it was an obstacle to the kind of unity she believes the party needs. (Specifically, Warren believes the party must unify around Elizabeth Warren.)

But while Sanders’ opponents may agree that he won’t make the best nominee, none can agree on how to actually stop him. In the meantime, Sanders has built a political movement that might make any kind of maneuvering aimed at denying him the nomination irrelevant, and one that by its very existence neutralizes one of the most compelling arguments his opponents once had. Back in September, a Biden adviser went on a memorable rant about his candidate’s inevitability in Politico. At the time, the former vice president was leading in the polls in every early primary state, and whether earned or not, the interview felt like a preemptive victory lap. “[H]e’s the only person to demonstrate substantial support across a multiracial coalition,” the aide said of his boss. “So actually he is most in step with the party. But no one ever sees it that way because that is not the world as seen through Twitter.”

The racial homogeneity of Iowa and New Hampshire, both states where Sanders won the most support, allowed some Biden supporters to indulge in their illusion of being the true frontrunner for a little bit longer. Speaking on behalf of Biden on Friday, Nevada Democratic Rep. Steven Horsford expressed his relief that “a state that reflects the diversity of our country and of our party finally gets our say.” One Biden precinct captain dismissed her candidate’s fifth-place showing in “White Hampshire.”

Such a characterization of Sanders’ movement was never really true, but it has never been less true than in Nevada. While his rivals sought to reduce the senator’s support to its most unseemly caricature—the angry and online “bro”—Sanders was winning with a coalition that looked as diverse as the state. I spent caucus day at the East Las Vegas Community Center, where voters of every age and ethnicity, some needing translation assistance, clustered in overwhelming numbers for Sanders in virtually every precinct. The Biden aide who boasted to Politico was right about the value of assembling a multiracial coalition, but wrong about the candidate who was going to do it.

Sanders pissed off Culinary in 2016 too, but in a way that speaks to the gulf between that campaign and this one. Then, struggling to scale up after unexpected success, Sanders scrambled to build an organization in Las Vegas and cut corners—the union complained that Sanders staffers had posed as Culinary workers in order to talk to voters in the backrooms of the Strip. This year, Sanders won the Strip, and his organization was so formidable that his opponents more or less conceded the race when they saw it in motion.

Sanders’ organization was so formidable that his opponents more or less conceded the race when they saw it in motion.

Perhaps because most campaigns sensed the inevitability of a Sanders victory, it was a fairly quiet week in Nevada leading up to the caucuses. With only a smattering of rallies between the end of early voting and Saturday’s main event, the schedule represented a sharp contrast to the hectic final days leading up to the contests in New Hampshire in Iowa. The exception was Wednesday’s debate at the Paris casino in Las Vegas, where the indecisiveness of Sanders’ opponents came into focus.

That night’s main attraction was the debut of Michael Bloomberg, the billionaire former Republican mayor of New York City whose campaign prefaced his appearance by releasing a memo explaining why everyone else in the race should drop out, lest Bernie walk away with the nomination. (Pete Buttigieg’s campaign followed suit with a counter-memo arguing that Bloomberg should quit.) Bloomberg, even Bloomberg’s own team seemed to acknowledge, looked terrible on the stage—and may have single-handedly rejuvenated Warren’s campaign with a series of incoherent answers on allegations of his inappropriate conduct toward women and his police department’s reliance on the unconstitutional stop-and-frisk program.

But perhaps the most revealing moment for the race itself came toward the end of the debate, when moderator Chuck Todd asked one of those process questions that often interest no one who isn’t wired exactly like Chuck Todd. Not this time. He wanted to know if the candidate who entered the convention with the most delegates should come away from it with the nomination. Five candidates said no. Only one said yes: Bernie Sanders.

It’s rare for politicians themselves to cut through bullshit like that, and to effectively acknowledge in front of 19.7 million television viewers that for all of the bluster, no one but Sanders actually expects at this moment to be the person with the most delegates. The other candidates are increasingly acting like none of their opponents can beat Bernie. And after Saturday, it’s starting to look like they’re right.