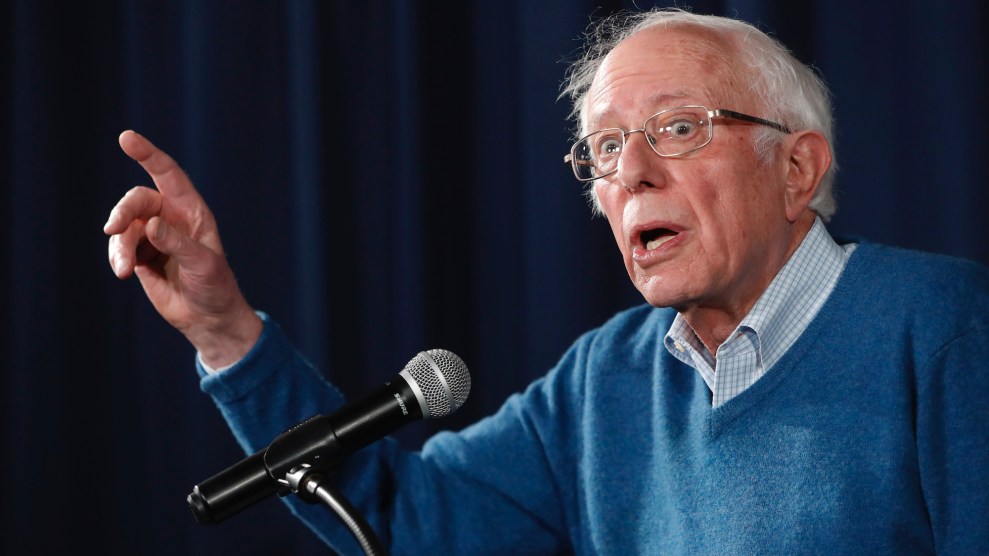 Before hordes of international press who had trudged through a slushy hellscape in Manchester, New Hampshire, on Thursday afternoon, Bernie Sanders announced what he’d waited three days to say: He had won the most overall votes in the Iowa caucuses. And as he did so, he strongly condemned the caucus process and the Iowa Democratic Party for its handling of the contest.

To Sanders, it didn’t matter that only 97 percent of the precinct results had been counted—which he readily acknowledged—nor that Democratic National Committee chair Tom Perez had called for a re-canvass 30 minutes before Sanders stepped up to the podium. Nor did it matter that the popular vote count Sanders cited had no actual bearing on how Iowa’s delegates would be awarded. When a reporter asked Sanders if declaring victory at this phase would contribute to the sea of campaign spin (at its most innocent) and disinformation (at its most nefarious), the candidate demurred. “No,” he said flatly, “because we got 6,000 more votes.”

The fact that Sanders could cite that statistic was a triumph unto itself. In the wake of Hillary Clinton’s 2016 caucus victory, the Vermont senator and his loyalists had successfully pressed the DNC to adopt new caucus rules that required the Iowa Democratic Party to report the raw vote counts alongside the state delegate equivalents (SDEs). Sanders argued—at the time and since—that the caucus results didn’t wholly reflect the will of the people.

“I don’t know,” Sanders said today when a reporter asked if he thought he actually won Iowa in 2016. “I don’t think anyone knows.”

To be certain, nobody knows who won Iowa this cycle, either. While Sanders leads in raw votes, Pete Buttigieg has reportedly led in delegates, though precinct data from satellite caucus sites—which Sanders’ campaign fought to establish and heavily organized—may put Sanders ahead. This fact has given Buttigieg, too, license to declare himself victorious—and he has. But Sanders dismissed Buttigieg’s efforts to cast himself as the winner, calling the difference in delegates each will walk away with “meaningless.” And besides! Sanders had won more votes. (One need not look back too far in history to see how similar arguments have turned out for Democratic presidential hopefuls.)

But Sanders’ self-described win did nothing to soften his position on Iowa’s caucus process, which he slammed as an affront to Democracy. He deemed the whole situation an “outrage,” the tabulation a “screwup,” and slammed the Iowa Democratic Party for being “extremely unfair” to the candidates and the people of Iowa. “In my view, it is far too complicated,” Sanders said of the process.

He shot a little snark Iowa’s way, saying that if the “so-called recount” proceeded as Perez suggested, it would be “very important for the Iowa Democrats, but not important for the rest of the country.” Adding regional insult to injury, Sanders said of his popular vote win in Iowa: “In Northern New England, we call that a victory.”