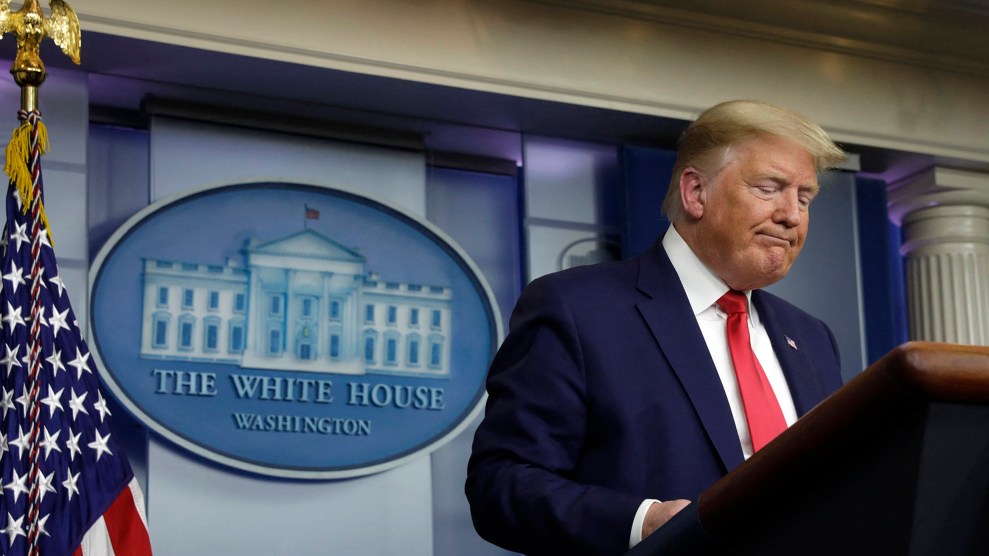 President Donald Trump at a press briefing on the COVID-19 pandemic White House on April 3, 2020. Gripas Yuri/Abaca via ZUMA

As the country was gripped by the coronavirus pandemic in March, President Donald Trump saw some of the best approval numbers of his presidency. Multiple polls showed that a small majority of Americans approved of his handling of the crisis, while his personal approval ratings ticked up slightly. For a polarizing leader whose personal approval has never cracked 50 percent, it looked like the national urge to trust a leader in times of crisis might just benefit the president eight months from the 2020 elections.

But as we enter April, those numbers have reversed course. Navigator Research, a progressive survey project operated by two Democratic polling firms, began a daily tracking poll two weeks ago to measure how the public viewed the crisis and Trump’s response to it. In their first tracking poll, released on March 24, 52 percent of Americans approved of the president’s handling of the pandemic. But in the two weeks since, those numbers have declined. Their polling shows that a growing number of Americans feel that Trump downplayed the crisis, was unprepared, and failed to respond quickly. In the latest poll out Saturday, 59 percent of respondents said they had “serious concerns” that Trump failed to take decisive action in the early stages of the outbreak. Even 40 percent of voters who supported Trump in 2016 now believe he failed to take the crisis seriously enough early on. The number of people saying Trump was honest about the crisis has declined, the poll showed, and 53 percent now believe he has been dishonest.

There are obvious sources for these concerns. The pandemic is growing rapidly in the United States—by Saturday there were nearly 300,000 cases—while the medical community has been left without basic medical equipment to handle the growing demands in hospitals. In New York, the epicenter of the epidemic in the US, calls for additional ventilators have been rebuffed by Trump. With nearly 8,000 deaths by Saturday, fatalities are on the rise and public health officials warn that a terrifying shortage of hospital beds and ventilators will likely mean the mortality rate will go up. Meanwhile, unemployment is soaring, with 10 million new jobless claims since mid-March.

As more reporting analyzes administration’s response, the more evidence there is that the president shirked his responsibilities while the virus spread. According to a new report by the Washington Post, it took Trump 70 days from the first time he was notified of the coronavirus and its grave implications to treat it as a public health crisis. That’s more than two months of wasted time during which the White House failed to grasp the threat and turned down requests for emergency funding from health officials.

Though it shut down travel from China at the end of January—where the virus first appeared in the city of Wuhan in November—it had allowed 300,000 people to enter the country from there during January. And the administration rebuffed calls from health care officials and White House aides to limit travel from Europe for over a month as it became another hotspot for the virus. Trump himself compared the coronavirus to the flu and a political act by the Democrats to undermine his election chances, as he predicted it would soon disappear.

Perhaps the most consequential failure was the administration’s bungling of testing, which hobbled the country’s response and blinded it to the potential enormity of the outbreak. The Centers for Disease Control and Prevention failed to produce a good test, causing likely fatal delays in tracking the spread of the virus. As the Post reported:

[In February] federal medical and public health officials were emailing increasingly dire forecasts amongst themselves, with one Veterans Affairs medical adviser warning, ‘We are flying blind,’” according to emails obtained by the watchdog group American Oversight.

Later in February, U.S. officials discovered indications that the CDC laboratory was failing to meet basic quality-control standards. On a Feb. 27 conference call with a range of health officials, a senior FDA official lashed out at the CDC for its repeated lapses.

Jeffrey Shuren, the FDA’s director for devices and radiological health, told the CDC that if it were subjected to the same scrutiny as a privately run lab, “I would shut you down.”

The real implications of those delays and missteps were not fully apparent during early polling regarding the White House response. But now, as the death toll mounts and more state governors have stepped up their responses to the emergency, it appears the slow response is now eating away at the public’s confidence in the president.

On February 25, Kayleigh McEnany, a spokesperson for the Trump campaign, told Fox News, “We will not see diseases like the coronavirus come here.” Meanwhile, White House economic adviser Larry Kudlow said the virus was “contained.” More than a month later, comments like these are no longer inspiring confidence.

On the same day Larry Kudlow said coronavirus was “contained” on Feb. 25th, Trump’s campaign spox made an even more bold claim.

“We will not see diseases like the coronavirus come here..and isn't it refreshing when contrasting it with the awful presidency of President Obama." pic.twitter.com/O0DDH3Rvkw