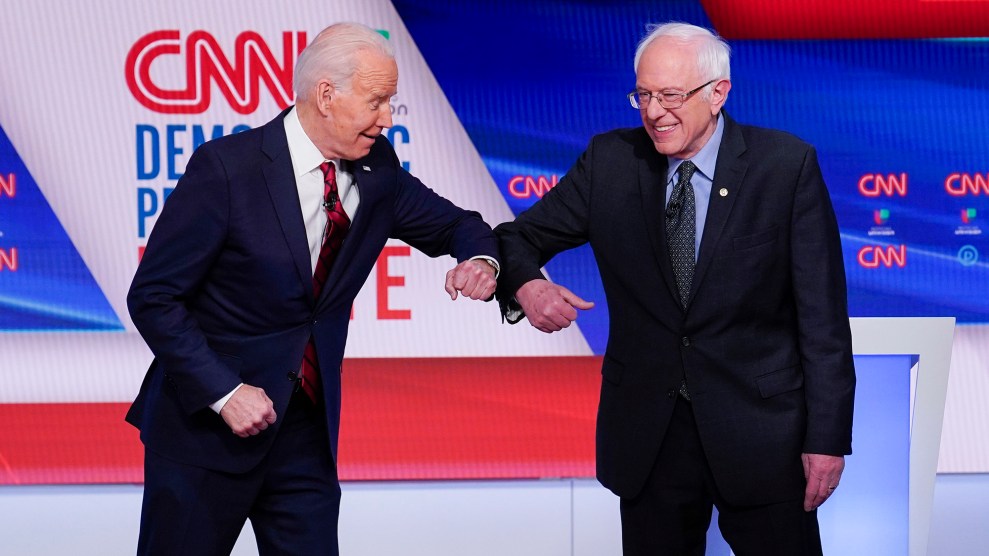 When Bernie Sanders exited the 2020 presidential primary last month, Biden promised that Sanders’ supporters would have a say over the policies Biden would run on in the general election. On Thursday, the Biden campaign revealed the members of six “Biden-Sanders Unity Task Forces” that will develop that policy platform. Experts who had once operated at the liberal fringe of the Democratic party will have an audience with its presumptive nominee.

The six groups—which will focus on immigration, climate change, criminal justice, the economy, education, and health care—make strange bedfellows of Biden’s and Sanders’ high-profile surrogates. Rep. Alexandria Ocasio-Cortez (D-N.Y.) and former Secretary of State John Kerry, for example, will lead the working group on climate change. Serving alongside them is Rep. Kathy Castor (D-Fla.), a Biden pick who chairs the House’s select committee on climate change, as well as Varshini Prakash, a Sanders surrogate and co-founder of the Sunrise Movement who’s been critical of Castor’s committee.

The Sanders’ picks—which account for slightly less than half of the committees—include some of the biggest names in progressive politics. They include labor leaders such as SEIU president Mary Kay Henry, a “Medicare for All” supporter who slammed Biden’s suggestion that the single-payer plan would hurt unions, and Sara Nelson, the president of the country’s biggest flight attendants association who is often discussed as a next potential leader of the AFL-CIO.

But the Sanders camp also named lesser-known experts who played an influential role in shaping his 2020 platform—ones whose ideas have been at odds with Biden’s advisers. The economics task force includes Stephanie Kelton, an expert in modern monetary theory—a controversial idea that calls for massive government spending—who served as a senior economics adviser to the Sanders’ campaign. The Sanders economic delegation also includes Darrick Hamilton, the racial wealth gap scholar who shaped Sanders’ federal jobs guarantee, as well as his plans for public education, housing plan, and student debt. As I explained in a profile of the economics professor earlier this year, Hamilton’s ideas helped Sanders bridge the gap between systemic racism and economic inequality in his policy platforms, something that has become a key rallying cry of the activist left.

The task forces also include a familiar name from another 2020 Democratic primary candidacy: Sonal Shah, named to the economy task force, is an Obama White House alumna who most recently served as policy director of Pete Buttigieg’s campaign. None of the major policy players from Elizabeth Warren’s plan-powered campaign have been named to these groups.

The “policy primary” had been a major story as the 2020 Democratic primary unfolded last year. Sanders, in his second run for the presidency, led the way with familiar hits such as “Medicare for All” and his universal free public college proposal, as well as new ones, such as his plan to cancel all student debt. Biden, for the most part, sat it out, opting instead for an emotional appeal to restoring “the soul of the nation.”

Sanders’ ideas had drawn a swath of younger, liberal voters to the Vermont senator’s candidacy, as well as the favor of influential liberal grassroots organizations that had been inspired by his first run four years ago. When Sanders dropped out of the race last month, a coalition of youth-led liberal groups demanded Biden’s campaign adopt key planks of Sanders’ platform and consult Sanders’ bevy of experts as he outlined his White House transition plans. The task forces are a nod to that.

A remaining question is really how much influence these groups will actually exert over the platform Biden and the DNC adopt. The press release announcing the groups says the task forces will “make recommendations” to the former vice president and the DNC Platform committee with no guarantee that the ideas will be adopted wholesale.

As I reported last month, progressives had worried that Biden would name Wall Street sympathizers or corporate lobbyists he’s consulted to these groups. In a letter to Biden, a coalition of youth-led progressive groups asked that Biden appoint no “current or former Wall Street executives or corporate lobbyists, or people affiliated with the fossil fuel, health insurance, or private prison corporations, to your transition team, advisor roles of cabinet.” While the task forces are devoid of the left’s undesirables, Biden has leaned on a massive network of informal advisers accumulated during his roughly four decades in federally elected office. A number of them have been neoliberal economists who have openly criticized the work of Kelton and Hamilton—including Larry Summers, a neoliberal economist who served in the Clinton and Obama administrations who drew the ire of the left when they learned he’d been consulting Biden.

There’s also the question of whether any platform will even matter in Biden’s face-off against Trump, who has fallen behind the former vice president in major polls as voters judge his pandemic response. Policy had been a lukewarm animating force in the Democratic primary: Elizabeth Warren, the candidate with the most plans, lost to Joe Biden, the candidate with the fewest. But Biden will need an enthusiastic left to support his campaign throughout the summer and fall.