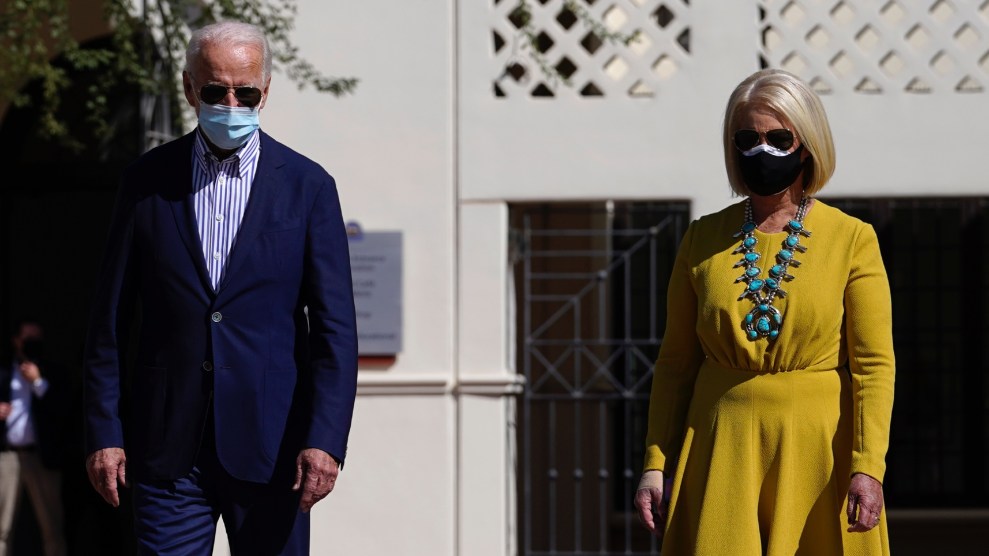 At this summer’s Democratic National Convention, Cindy McCain made an appearance in support of Joe Biden, who was a longtime Washington friend of her late husband, Sen. John McCain.

While it was only 12 years ago that McCain took the stage at the Republicans’ convention in support of her husband’s White House bid, last week, she appeared alongside Biden as he campaigned in Arizona, her home state and the place John McCain helped represent for over three decades. This weekend, Biden is rolling out an ad where McCain says the Democratic nominee shares the late senator’s “courage,” “compassion,” and “respect” for service members.

CNN reports that the ad will air across the state starting Saturday, as well as during this weekend’s broadcasts of Fox News Sunday and 60 Minutes. Those venues suggest Biden’s campaign believes McCain could be an effective messenger toward older or conservative audiences who once supported her husband’s campaigns, some elements of which have grown more receptive to Democrats over Trump’s time in office.

While those voters could be part of a winning Biden coalition in Arizona and elsewhere, the state’s electoral fortune likely hinges on turnout among its segment of growing and increasingly engaged Latinx voters. In the latest issue of Mother Jones, Fernanda Echavarri reports on persistent concerns in Arizona that Democrats haven’t done enough to prioritize the community’s needs and votes. As part of her reporting, she spoke with Eduardo Sainz, state director of Mi Familia Vota.

“Candidates sometimes don’t pay attention to Latinos,” Sainz says. “There needs to be investment in Latinos in the same way all other demographics get investment to ensure that our community comes to participate.”

While both parties see Arizona as a battleground state (Phoenix was the hottest election ad market from April to early August), Sainz thinks Democrats still haven’t done enough to win over its Latinx electorate.

Whether or not that’s true could turn out to be one of the fall’s most important questions. Aside from 11 electoral college votes, November’s election in Arizona will see McCain’s senate seat, vacated after his August 2018 death, filled with a permanent replacement—either Democrat Mark Kelly, or Republican Sen. Martha McSally, who was appointed to the body after losing a separate 2018 Senate race. And along with at least one closely contested congressional contest, control of both houses of Arizona’s state legislature depends on the outcome of a handful of seats.