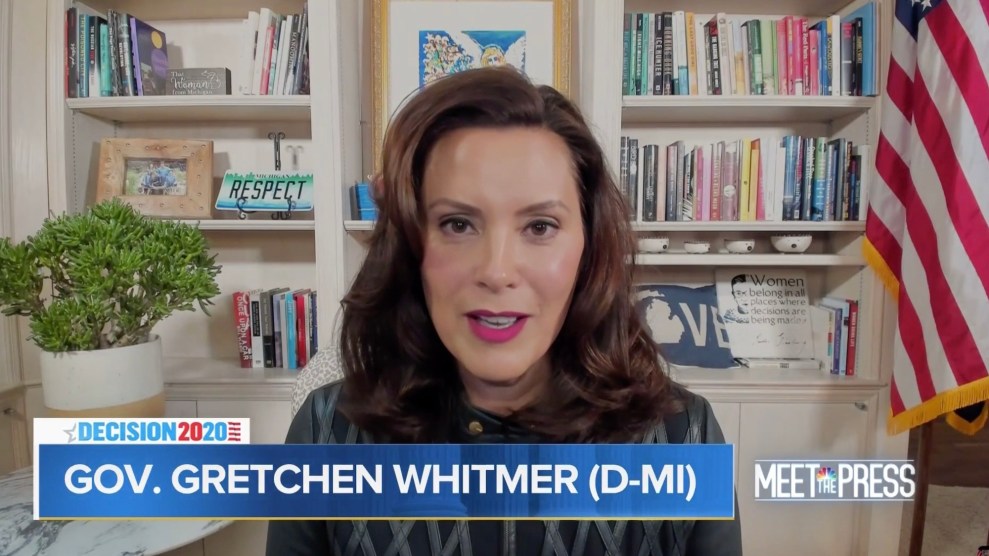 Screenshot "State of the Union"/CNN

Less than two weeks after the FBI charged six men with plotting to kidnap and potentially assassinate Michigan Gov. Gretchen Whitmer, a frenzied crowd at a Trump rally chanted “Lock her up!” on Saturday. President Donald Trump responded to his supporters in Muskegon, Michigan, by saying, “Lock ’em all up.”

In a Sunday appearance on Meet the Press, Whitmer said it was “incredibly disturbing that the president of the United States—10 days after a plot to kidnap, put me on trial, and execute me, 10 days after that was uncovered—the president is at it again, and inspiring, and incentivizing, and inciting this kind of domestic terrorism.”

“It is wrong. It’s got to end,” the governor continued. “It’s dangerous not just for me and my family, but for public servants everywhere.”

Whitmer made a similar call on Twitter on Saturday.

This is exactly the rhetoric that has put me, my family, and other government officials’ lives in danger while we try to save the lives of our fellow Americans. It needs to stop. https://t.co/EWkNQx3Ppx

As Mother Jones has reported, the FBI charged six men earlier this month with conspiring to kidnap Whitmer, while the state of Michigan charged seven others with “providing support for terrorist acts.” The men charged had a history of posting far-right memes on social media that glorified violence.

The plot to kidnap Whitmer was highly specific. As Vox wrote based on an affidavit from an FBI special agent:

Over the summer, the men trained in tactics and weaponry at the home of one of the militia group’s members. They discussed storming the Michigan Capitol but soon concluded that Whitmer would be more vulnerable at either her vacation home or the governor’s official summer residence. “It’s a perfect fuckin’ setup. Out of everywhere that she resides, this is the only one that’s probably actually feasible,” one plotter said in a recorded conversation.

Several of the men attempted to buy explosives that they planned to use to distract the police during the kidnapping, according to the affidavit. The person they tried to purchase them from turned out to be an undercover FBI agent.

On Sunday, Lara Trump defended her father-in-law on CNN. “He wasn’t doing anything, I don’t think, to provoke people to threaten this woman at all,” she said. “He was having fun at a Trump rally.”

Whitmer, though, has paid the price for this “fun,” as a favorite target of the president’s for months. With just two weeks before Election Day, President Trump consistently trails former Vice President Joe Biden in the crucial swing state.