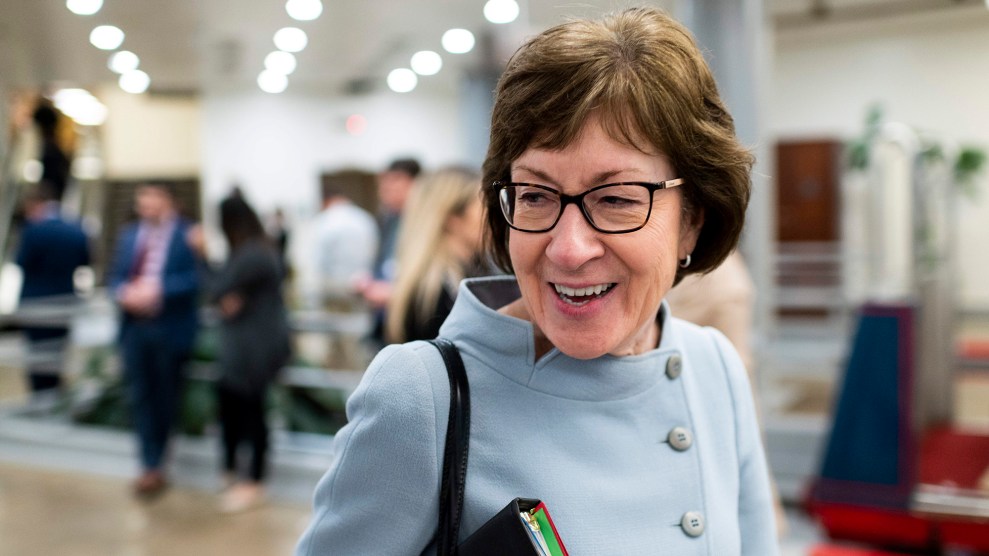 After years of speculation that the Trump era had doomed Sen. Susan Collins’ (R-Maine) reelection, the Maine Republican and her brand of moderate conservatism narrowly defeated her Democratic opponent, Maine House Speaker Sara Gideon, who conceded the race Wednesday afternoon.

Over 24 years in the Senate, Collins’s trademark has been her independence and willingness to buck her party on key votes. During the Obama administration, she sided with Democrats to repeal the ban on gay and lesbian troops serving in the military, supported expanding background checks in the wake of the 2012 Sandy Hook massacre, and resisted Sen. Majority Leader Mitch McConnell’s (R-Ky.) efforts to skewer Obama’s climate regulations. In her past election runs, she was the rare Republican endorsed by nominally nonpartisan single-issue groups whose agendas align closely with Democrats, such as the League of Conservation Voters, Human Rights Campaign, and Everytown for Gun Safety. It also earned her overwhelming voter support: Six years ago, Collins took nearly 70 percent of Maine’s vote—including 40 percent of Democrats.

That support had faded as Collins headed into her fifth reelection campaign. A senator who appeared moderate under past administrations looked mealy-mouthed and untrustworthy as Trump leaned into his party’s most dangerous, extremist instincts. Collins did vote against her party’s attempts to repeal the Affordable Care Act in 2017, but more often she toed the party line—most memorably when she joined her Republican colleagues to confirm Supreme Court Justice Brett Kavanaugh. She sided with her Democratic colleagues in their efforts to bring forth more witnesses during Trump’s Senate impeachment trial, but joined Republicans in their vote to acquit the president. And though Collins had urged Senate Republicans to not name a replacement for Justice Ruth Bader Ginsburg after the justice’s death just six weeks before Election Day but was ultimately overruled, a signal to voters and the single-issue groups that once endorsed her that she lacked the requisite clout to change her party’s mind.

Activists whose political enthusiasm was forged in the wake of Trump’s 2016 victory led the way in holding Collins to account and mobilizing support around Gideon. The shift also caught the eyes of Maine’s seniors, a key demographic in the state with the oldest population and with whom the spirit of New England political nonconformity lives. During Collins’ 2014 election, seniors supported her by a 20-point margin; polling heading into November showed them favoring Gideon. But ultimately, loyal Republican voters in northern Maine—the same ones who delivered an electoral vote for Trump four years ago and again this time around—carried Collins to victory.