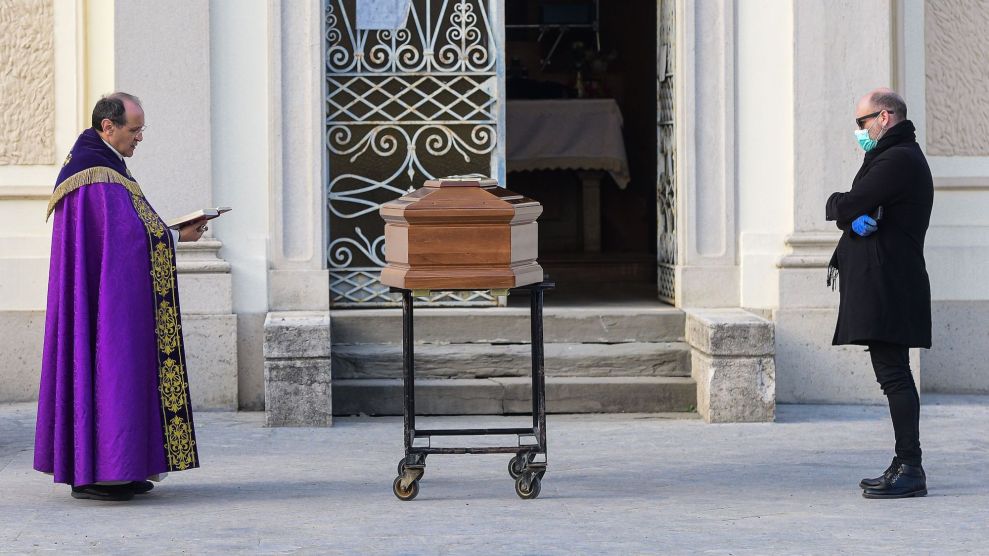 A man at his mother's funeral service in Bergamo, Italy.Piero Cruciatti/Getty

Last Monday, Washington Gov. Jay Inslee issued an order prohibiting most public social gatherings until March 31—including funerals. But at the Barton Family Funeral Service in Kirkland, Washington, funeral services had already essentially stopped before the ban went into effect. “Most families are really really kind and realize this and they want to be careful also in this environment,” says Pat Barton, who has provided services for some of the 35 people associated with the Life Care Center of Kirkland nursing home who have died from COVID-19. She has asked those who want a graveside memorial to keep their numbers small.

“There’s no shaking of hands, there’s no touching,” she says. “That’s been difficult. Because a lot of people, at the time of grief, like to have a handshake. They’d like to have somebody to feel. And that’s not a possibility right now.”

As the coronavirus spreads in the United States, the situation is not nearly as dire as it has been in Italy, where the mounting death toll has overwhelmed some of the country’s morgues, mortuaries, and funeral industry. Italian families largely confined to their homes have postponed or forgone funerals or have asked priests to bless the deceased alone. There has been a shortage of coffins. Last week, a video posted by the newspaper Corriere Della Sera showed a convoy of military trucks transporting about 60 coffins from the overloaded morgues of Bergamo, Italy’s hardest hit city, to cremation sites in other towns.

Yet the American way of death is already changing as communities adopt social distancing measures to slow the spread of the coronavirus. Following the White House’s guidance last week to limit all gatherings to 10 people through the end of the month, the National Association of Funeral Directors is advising its members to consider limiting memorial services to immediate family or livestreaming them. “We know this is a difficult and fluid situation,” Washington’s funeral board wrote in an email to funeral industry workers on March 19, clarifying that funerals were banned under Inslee’s order. “It is also a time to come together to keep our families safe and ensure social distancing to slow the spread of COVID-19.” In the San Francisco Bay Area, which has been under a shelter-in-place order since Tuesday, funeral homes are considered “essential businesses” and are allowed to stay open, and viewings in groups under 10 people have continued in some places.

The concern about funerals is not that the bodies of the people who die from COVID-19 will transmit the virus. The Centers for Disease Control says there is “currently no known risk associated with being in the same room at a funeral or visitation service with the body of someone who died of COVID-19,” though it advises against kissing, washing, or shrouding dead bodies. The risk is that services to remember the dead will become sites of transmission for the virus due to close contact between mourners. There’s at least one example of this happening so far. Public health officials in Doughtery County, Georgia, announced this week that they believed COVID-19 cases in their area were traceable to two funerals held at the Martin Luther King Memorial Chapel.

After learning of Washington’s funeral ban, Nora Menkin, executive director of the nonprofit Co-op Funeral Home in Seattle, had to call a family to cancel a memorial service. “We can only do direct burial or direct cremation without any family presence at all,” she says. “No witnessing, no viewing, no nothing for the time being.”

According to Menkin, a recent client suspected her elderly mother had died of COVID-19. The client wanted to witness her mother’s cremation, but she also knew her family had to self-quarantine. Under those conditions, Menkin’s funeral home was offering to livestream the beginning of the cremation instead of having any family members attend in person. Across the country, funeral homes and religious institutions have been embracing livestreaming, hosting shiva gatherings on Zoom or funerals on Facebook Live. One company that specializes in livestreaming memorials has seen weekly views spike by 60 percent, according to Kaiser Health News.

“We will be trying to think creatively and find ways people can gather and grieve as a community without actually being together in a chapel, as they once were, seated side by side, hugging and crying and sharing boxes of tissues,” says Amy Cunningham, a Brooklyn-based funeral director. Cunningham, who specializes in green funerals, has been researching alternatives to in-person memorials, including streaming services with clergy and closed caskets or using video conferencing for friends and family members to gather online for eulogies, music, and personal tributes. “You could hug pillows together, you could hug yourself on screen, you can relate to each other virtually,” Cunningham says. “We’re going to perhaps need to, for the next couple of months, experiment with that kind of thing. If families are willing to do it.”

In Staten Island, New York, two funeral directors have tested positive for the coronavirus. Some funeral home employees are taking precautions to protect themselves such as making arrangements by phone or email rather than in-person, throwing away pens used to sign legal documents, and stepping up disinfection regimens. Barton’s funeral home is not embalming anyone diagnosed with coronavirus out of an abundance of caution. (The CDC currently says embalming can be conducted safely.) Menkin’s staff is treating every decedent as if they had been exposed to the coronavirus. She is hoping she has enough staff to handle the COVID-19 death toll if it rises to the worst current projections. One of her funeral directors who lives in Kirkland is already self-quarantining.

Will the funeral industry have the capacity to handle surge of deaths from the coronavirus? “That’s the big question,” says Cunningham. But, she adds, “the dead will be lovingly cared for by an industry that’s been practicing this for a long time.” Menkin says her business could take on at least 20 percent more clients. “We physically have more space, and we have more funeral homes that have more capacity than they currently are serving,” she says.

But, she adds after a moment, it will depend on how well communities can slow the spread of the virus so that fewer people are sick the same time—and, correspondingly, so that there are fewer bodies. “If everyone gets it and dies all at once, that’s one thing,” Menkin says. “But the hope with the precautions that everyone taking is that it spreads out over a longer period of time.”