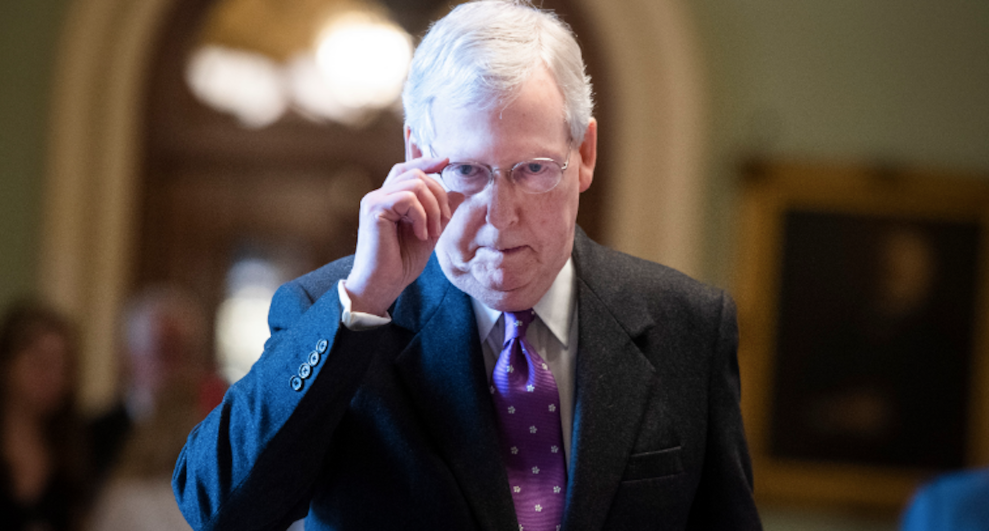 As the coronavirus crisis deepens in the United States, experts have pointed to a series of disastrous missteps that helped lay the groundwork for shortages in testing and medical equipment around the country. Even some Republicans have started to concede that the federal government may have been too slow in confronting the pandemic.

But that admission, if that’s what it is, has been paired with a false new accusation: that it was Donald Trump’s impeachment trial that prevented the president, along with Congress, from mounting a forceful response to the public health crisis in January and early February.

“[Coronavirus] came up while we were tied down in the impeachment trial,” Senate Majority Leader Mitch McConnell (R-Ky.) said during an appearance on Hugh Hewitt’s radio show on Tuesday. “I think it diverted the attention of the government because everything, every day was all about impeachment.” McConnell then praised Sen. Tom Cotton (R-Ark.) for being the first to raise an alarm about coronavirus—a rather generous way to portray Cotton’s role in promoting fringe conspiracy theories about the virus’ origins.

The remarks from the top Senate Republican echoed similar narratives about impeachment percolating on the right.

But the claim—which dovetails with Trump’s ongoing efforts to blame his political opponents for his much-maligned response to the crisis—ignores reality on multiple counts. First, there’s the fact that senior administration officials, according to the Washington Post, spent weeks in January warning Trump about the virus’ potential for disaster in the United States. “Donald Trump may not have been expecting this, but a lot of other people in the government were—they just couldn’t get him to do anything about it,” one official told the Post. “The system was blinking red.”

While Trump ignored those national security warnings, he played a lot of golf, hitting the links at least five times from mid-January through early March. Did impeachment cause that? The president also found time to sign a major trade deal, the USMCA, during the trial—an action that had nothing to do with the looming crisis ahead.

McConnell’s insistence that the Senate was distracted by impeachment is similarly baseless.

The trial didn’t stop the Senate’s health committee from receiving a briefing about the virus from US public health officials on January 24. That day, Sen. Kelly Loeffler (R-Ga.) and her husband began dumping between $1.28 and $3.1 million in stock. Senate Intelligence Committee chair Richard Burr (R-N.C.) didn’t miss a February 4 briefing on coronavirus, even though it, too, was in the midst of the impeachment trial. Days later, he sold up to $1.7 million in stock, ProPublica reported. The FBI is reportedly investigating the sale by Burr, who claims he did not consider the briefing when he made the sale.

If impeachment really had prevented McConnell from taking action on coronavirus, one would have expected him to deal with the issue immediately after the trial concluded on February 5. He did not.

The first thing senators did after acquitting Trump was take a five-day weekend. Upon their return, the Senate did not turn to pandemic preparation measures. Instead, they voted on a procedural motion to confirm a federal district court judge, one of five judges they confirmed over the next few days.

But timeline aside, conservatives now blaming impeachment for the current crisis may want to rethink that strategy. Trump, remember, was impeached for withholding military aid from Ukraine in an effort to force that country’s president into opening investigations that would help him politically—actions that Stanford Law professor Pamela Karlan warned might be repeated during a natural disaster if Trump was not removed from office. Now, take a look at Trump’s explanation for why he isn’t calling back Democratic governors he believes have been too critical of his coronavirus response:

Given these parallels, the Senate’s problem might not be that it paid too much attention to impeachment, but too little.