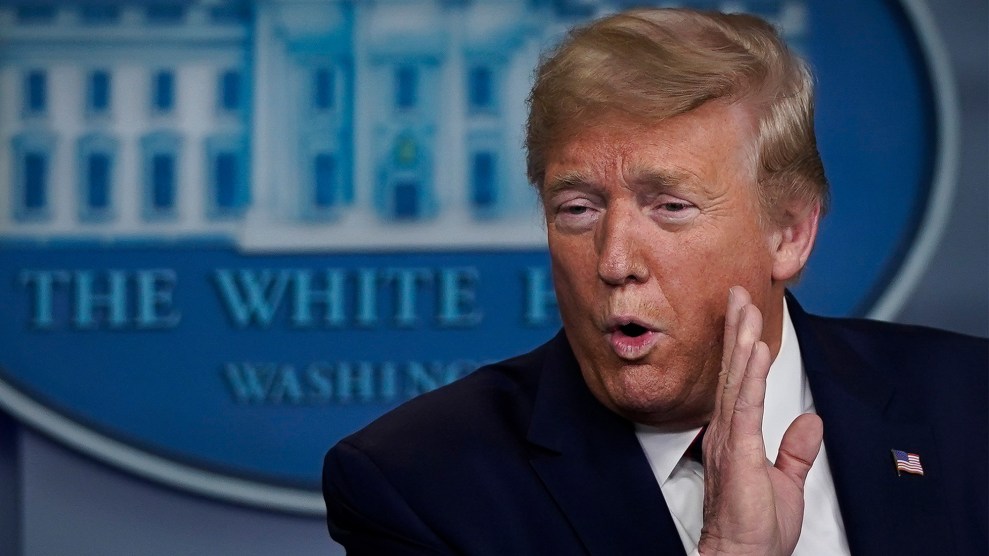 More than 2,000 people in the United States are dead and at least 135,000 have confirmed cases of COVID-19. But President Donald Trump has decided to use his Sunday to tweet about his TV ratings. His White House press briefings are as popular as The Bachelor finale and Monday Night Football, he boasted in a series of tweets on Sunday:

Because the “Ratings” of my News Conferences etc. are so high, “Bachelor finale, Monday Night Football type numbers” according to the @nytimes, the Lamestream Media is going CRAZY. “Trump is reaching too many people, we must stop him.” said one lunatic. See you at 5:00 P.M.!

Even for Trump, Sunday’s tweets feel exponentially out of touch with reality.

For weeks now, Trump’s daily press briefings have attracted an average of 8.5 million viewers on cable news. He uses the briefings to go on rants attacking the media and political opponents, and to share misinformation. News organizations, including Mother Jones, have urged TV networks to stop airing his press conferences live. Seattle’s NPR station KUOW made the decision to stop airing the briefings after observing a “pattern of false information and exaggeration.”

Only a reality TV president would brag about his popularity while the country is in the middle of a public health crisis. And, as my colleague pointed out in this ingenious video, Trump’s denial of the gravity of the situation sounds like the first act of pretty much every disaster movie ever written.