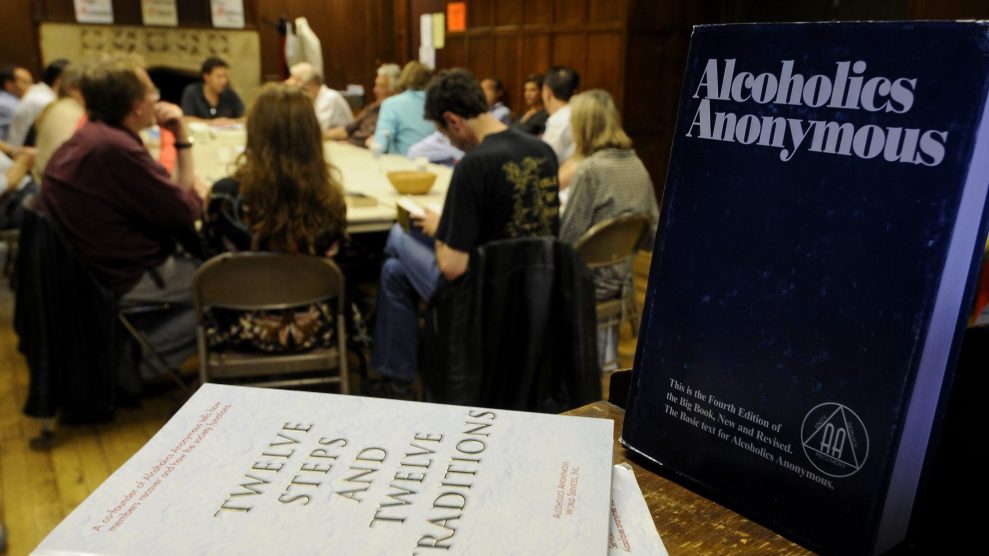 On March 14, six days before New York Gov. Andrew Cuomo implemented a shelter-in-place order for the state, effectively shutting down all nonessential services, Reagan Reed was notified that 50 Alcoholics Anonymous meetings had been canceled across New York City’s metropolitan area. As executive director of the Inter-Group Association of AA of New York, an umbrella organization for the area’s 6,000 AA chapters across the five boroughs and surrounding counties, it was her job to update the website’s event page.

Across the city, cancellations of AA meetings climbed to 600—there were so many that Reed had to hire someone to automate the site—as chapters complied with health guidelines from the Centers for Disease Control and Prevention to end large gatherings. The recommendations came in response to the COVID-19 outbreak—a pandemic caused by the novel coronavirus, which has killed 517 and infected more than 40,000 people, 20,000 in New York City alone.

Alcoholics Anonymous was established in 1935 to offer support for alcoholics as they attempt to manage their addiction. It’s the largest alcoholism recovery organization in the United States, including an estimated 1.3 million members and 66,000 chapters. Chapters meet regularly and abide by a recovery program of 12 steps, which focus on introspection and reconciliation, to overcome the desire to return to drinking. AA has spawned numerous other substance abuse support groups, like Narcotics Anonymous. But for recovering alcoholics in the midst of this pandemic, the loss of meetings may lead to damaging social isolation and a dangerous removal of support systems for the participants in the program.

“It’s imperative to us that we meet in person. Alcoholics are, by nature, isolating people.”

“It’s imperative to us that we meet in person,” Reed says. “Alcoholics are, by nature, isolating people. One of, if not the most important thing, about AA and staying sober is physically bringing yourself to a meeting and putting yourself in a chair, and being in a room full of people who you can physically listen to, and look at, and relate to.”

That may be challenging enough during normal times but it’s impossible during a global pandemic, especially given that the structure of AA meetings could make participants particularly susceptible to being infected. One quarter of its members are over age 60, a group especially vulnerable to the virus’s spread. And many AA meetings take place in church basements or other places where Reed says “the chairs are very close to one another because they’re in small spaces.” Anonymity is key, so contacting those who may have shown signs of infection is nearly impossible. And since groups are autonomous, during the early stages of the epidemic the decision of whether to cancel the meetings or change the format differed from chapter to chapter.

But today there’s an option that has never existed before: Many chapters that canceled meetings have migrated to the digital sphere by using video conference services like Skype or Zoom. NYIG tried to help host meetings and meet the full demand. The organization purchased a Zoom Room video conference space that can “host 500 meetings on the hour, per hour, and up to 1000 participants each.” Later this week, when NYIG plans to get everything up in running, they’ll potentially have the capacity to host 50,000 AA members at a given time, some in meetings as small as 300 and as large as 1,000. Since NYIG will be the host, chapter members won’t need to pay to access meetings.

“We have a format for how we hold AA meetings,” she says, “and we’re sticking to that format online.” The chairperson kicks things off, there’s a preamble, and the opportunity for group discussion. What’s missing is the hugging, the hand-shaking, and the experience of simply being together.

The fundamental, if uneasy, transformation that NYIG is going through to keep resources available to its members is taking place in addiction support groups across the country. Maryland’s Ashley Treatment, a drug and alcohol rehabilitation center with three locations across the state, is in the midst of its own transition. This week, most of its nearly 400 out-patients will see their meetings go online. For alumni of the center, who might not be able to access their networks of support, the organization is hosting three digital meetings daily. Its managers also are concerned that changes in the familiar support system could create cracks for people to fall through, especially for those without computers. “For those who can’t access it, it’s on us to think outside the box,” says Alex Denstman, senior vice president at Ashley Treatment.

Accessibility is what members say makes the AA model unique. “The anarchic nature, the ubiquity, means there are meetings anywhere…every hour on the hour,” says Garrett, an AA member—traditionally no last names are ever used—with three years of sobriety. His group, which has also moved online, holds five regular meetings a week. Garrett says the constant availability of physical support is key when someone is trying to get sober. “It is not uncommon to be in meetings where the only thing standing between the person coming to the meeting and drinking was that the meeting was happening at that time,” he says.

Like Reed and Denstman, Garrett understands the importance of self-quarantining, but there is little to substitute for the power of what went on when he first started going to meetings. “A lot of the stuff most helpful for me was kind of that intangible human interaction part,” he says. “I guarantee people will drink because they couldn’t get to a meeting, or the one they usually go to was cancelled and, for whatever reason, they didn’t get notice of that.”

The sudden pivot online threatens to leave some addicts behind, but for others it’s revealed an ease of connectivity whose potential they hadn’t before realized. Susie, a Delaware-based AA member with 18 years of sobriety who helps organize area meetings, was invited to participate as a speaker in her old Washington, DC, chapter’s online meeting. She says the face-to-face nature of meetings is essential to people in recovery, but that in the right context, connection online can become a useful tool for AA members in a wide variety of contexts beyond the current health emergency. “There are meetings for communities that are isolated, or living abroad where there aren’t English speaking meetings,” she says. “There are a variety of online resources that are springing up at the regional level and from the local groups themselves.”

If this pandemic arrived 20 years ago, there wouldn’t have been an alternative venue for entire chapters of recovering alcoholics to access. Though the migration online didn’t happen on anybody’s terms, Denstman, the senior vice president at Ashley Treatment, says he’s “grateful this is happening now, when we can utilize technology and create connections for people.”