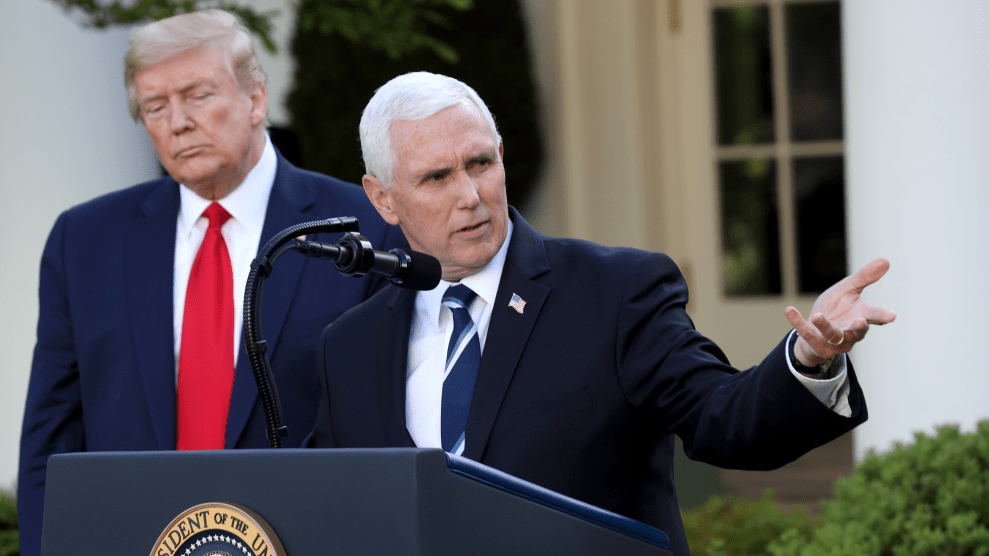 During Monday’s White House press briefing on coronavirus, a reporter asked Vice President Pence to explain the discrepancy between the number of tests he’d promised would be available mid-March—4 million—and the number of tests that were actually done by that time, a much lower figure. The United States did not reach its goal of conducting 4 million tests until April 20. (By contrast, a plan developed by a Nobel Prize–winning economist and a former FDA chief suggests the US should be testing 3 million people per week before re-opening even parts of the economy.)

Pence responded by claiming 4 million tests were conducted by early April, but a lag in processing the tests made the numbers seem lower.

“So when you said 4 million tests, you were talking about tests being sent out, not actually completed?” asked the reporter.

Reporter @jonkarl reiterates promises made by Pence and the Trump administration for testing and Pence says "it represents a misunderstanding" by the public regarding a test and the ability to test.

Not sure why Pence thinks this answer exonerates him. pic.twitter.com/u51EWWEAeX

The spin continued throughout the press conference. The briefing began with the leaders of CVS, Walgreens, and Rite-Aid taking the podium to reflect on the ways in which the private sector has stepped up to fight the virus. Yet it’s been more than six weeks since Trump brought these same company heads to a press conference to promise that they would scale up drive-through testing across country to meet the massive demand. Today, only 43 sites are operating in less than two dozen states, according to CNBC.

And more promises were made: President Trump today claimed that private sector partnerships would deliver more than 8 million tests in May. CVS promised 1,000 testing sites across the US by that time. Trump said by then we’ll be doing 100,000 tests per day.

Whatever justifies re-opening the states and putting people back to work. “We want them all to do it as quickly as possible,” said Trump.