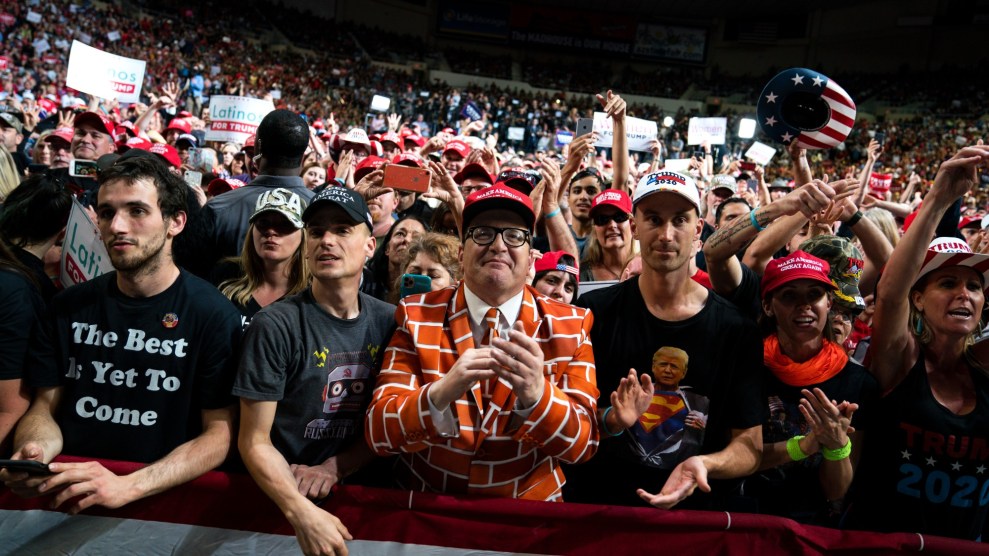 The top public health official in Tulsa wishes Donald Trump would stay away next week. When the president recently announced he would resume his in-person arena rallies after they were put on pause because of the coronavirus pandemic, his first scheduled stop was set for the Oklahoma city on June 20. While the campaign plans to fill a 19,000-person indoor stadium there, health officials are cautioning that the rally could have deadly consequences.

“COVID is here in Tulsa, it is transmitting very efficiently,” warned Dr. Bruce Dart, director of Tulsa’s City-County Health Department, in the Tulsa World. “I wish we could postpone this to a time when the virus isn’t as large a concern as it is today.” On Saturday, Oklahoma reported 225 new infections, a new daily high. As of Sunday, Oklahoma was reporting more than 8,000 infections and 359 deaths.

“It’s an honor for Tulsa to have a sitting president want to come and visit our community, but not during a pandemic.”

Dr. Dart blames the spike in infections on several factors, including quarantine fatigue, and warned that a large outbreak had the possibility of overwhelming the county’s health system. “A large indoor rally with 19-20,000 people is a huge risk factor today in Tulsa, Oklahoma,” he said before suggesting Trump could fall ill as a result of his own event. “I’m concerned about our ability to protect anyone who attends a large, indoor event, and I’m also concerned about our ability to ensure the president stays safe as well.”

“I think it’s an honor for Tulsa to have a sitting president want to come and visit our community, but not during a pandemic,” Dart added, telling the newspaper he was concerned infections touched off by travelers and crowds attending the rally could swamp local treatment capacity.

Several states that, like Oklahoma, were spared the worst in the early days of the pandemic are now recording a surge in infections and hospitalizations. On Saturday, 22 states reported increases in their daily cases. Relaxing restrictions aimed at stemming the virus’s spread have prompted health experts to warn that the country could see more outbreaks, spurred along by growing indoor gatherings.

But the president is prepared to go ahead with the rally, after rescheduling it from June 19, the day the Juneteenth holiday is celebrated marking Black people’s liberation from slavery. (Critics had pointed out the insensitivity of hosting a rally on that day, especially given the city’s history as a site of a major 20th century anti-Black massacre.)

Despite his track record of downplaying the seriousness of the disease, fumbling the federal response, and shunning masks, Trump and his campaign know they are subjecting his fans to risk by holding the rally: attendees must submit a form agreeing to not sue the campaign if they contract COVID-19.